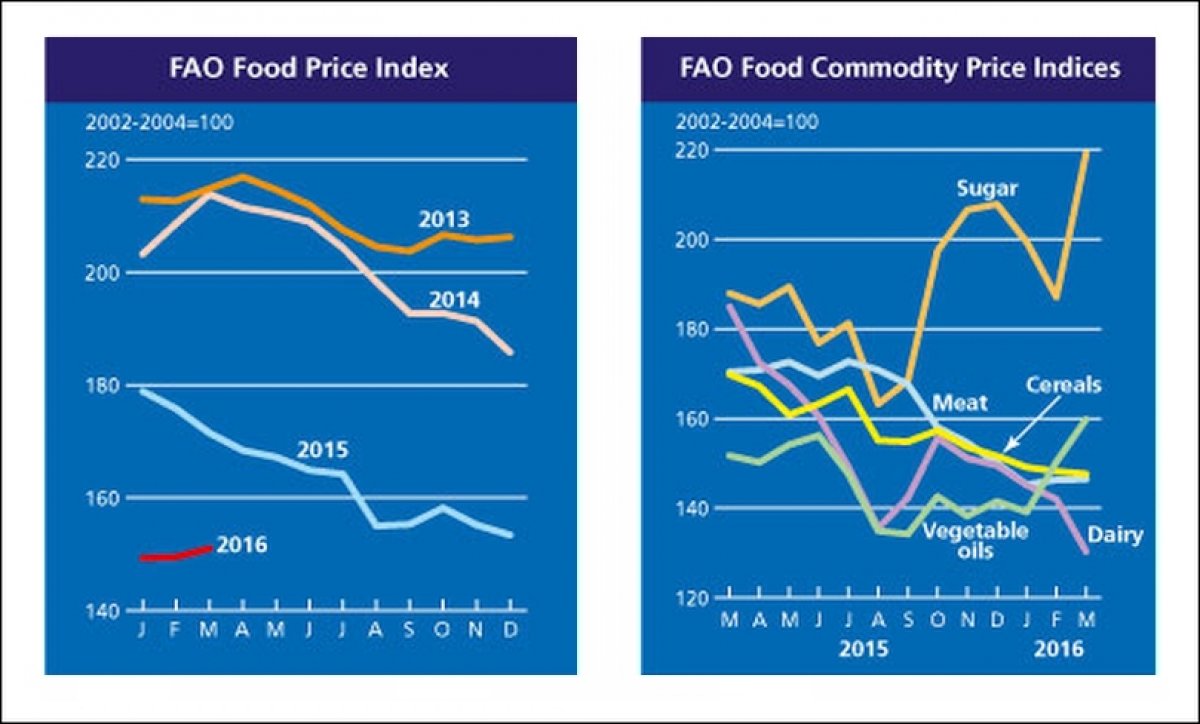 The FAO Food Price Index is a measure of the monthly change in international prices of a basket of food commodities. It consists of the average of five commodity group price indices, weighted with the average export shares of each of the groups for 2002-2004. The FAO Food Price Index averaged 151.0 points in March 2016, up 1.0 percent from February.

The FAO Food Price Index (FFPI) averaged 151.0 points in March 2016, up 1.0 percent from February, but almost 21 points (12.0 percent) below its March 2015 level. The main feature last month was the strong rebound in sugar prices, which, combined with a further increase in vegetable oil quotations, more than offset a plunge in dairy values. International prices of the other commodities used in the calculation of the FFPI changed little.

The FAO Cereal Price Index averaged 147.6 points in March, down marginally from February, but 13.1 percent less than in March 2015. Wheat prices averaged slightly lower, as a result of strong competition and a generally favourable supply outlook in the new season. Maize quotations remained under downward pressure, largely influenced by favourable production prospects in South America, weak import demand and larger than anticipated outlook for plantings in the United States. Rice prices were stable.

The FAO Vegetable Oil Price Index rose to 159.8 in March, up 6.3 percent (9.5 points) from February, hitting a 15-month high. The upturn was driven by palm oil, the component of the index with the highest weight. International palm oil prices surged for the second consecutive month on concerns about stagnating global production in 2016, following prolonged dry weather in Malaysia and Indonesia. By contrast, the average March prices of other oils remained either unchanged (soy oil) or fell (sunflower and rapeseed oil).

The FAO Dairy Price Index averaged 130.3 points in March, down 11.7 points (8.2 percent) from February – plummeting to a level last seen in June 2009. While prices for all dairy commodities fell, butter and cheese were the most affected, reflecting a build-up of stocks in the major exporting countries. In the case of milk powders, the declines have been contained by continued sales of SMP to intervention stocks in the EU, so providing an indicative base price for international transactions.

The FAO Meat Price Index averaged 146.4 points in March, practically identical to its February revised value. Prices were stable across the board. The removal of excess supplies through the aid to private storage scheme at the beginning of the year has helped to keep pigmeat export prices steady in the EU and, by extension, in the international market overall. Sheepmeat prices also stabilized, reflecting the end of the seasonal peak in supplies from Oceania. Poultry and bovine meat prices remained essentially unaltered compared to the previous month, as international supply and demand remained well-balanced.

The FAO Sugar Price Index averaged nearly 219 points in March, up 32 points (17.1 percent) from February and reaching its highest level since November 2014. Last month’s sharp increase mainly reflects the expectation of an even larger production deficit during the current crop year than earlier anticipated, following the recent heavy rainfall in Brazil, the world’s largest sugar producer. Reports of higher use of raw sugar for the production of ethanol in Brazil also boosted prices.
Source
Food and Agriculture Organisation of the United Nations (FAO)
Related Companies
Food and Agriculture Organization of the United Nations (FAO)