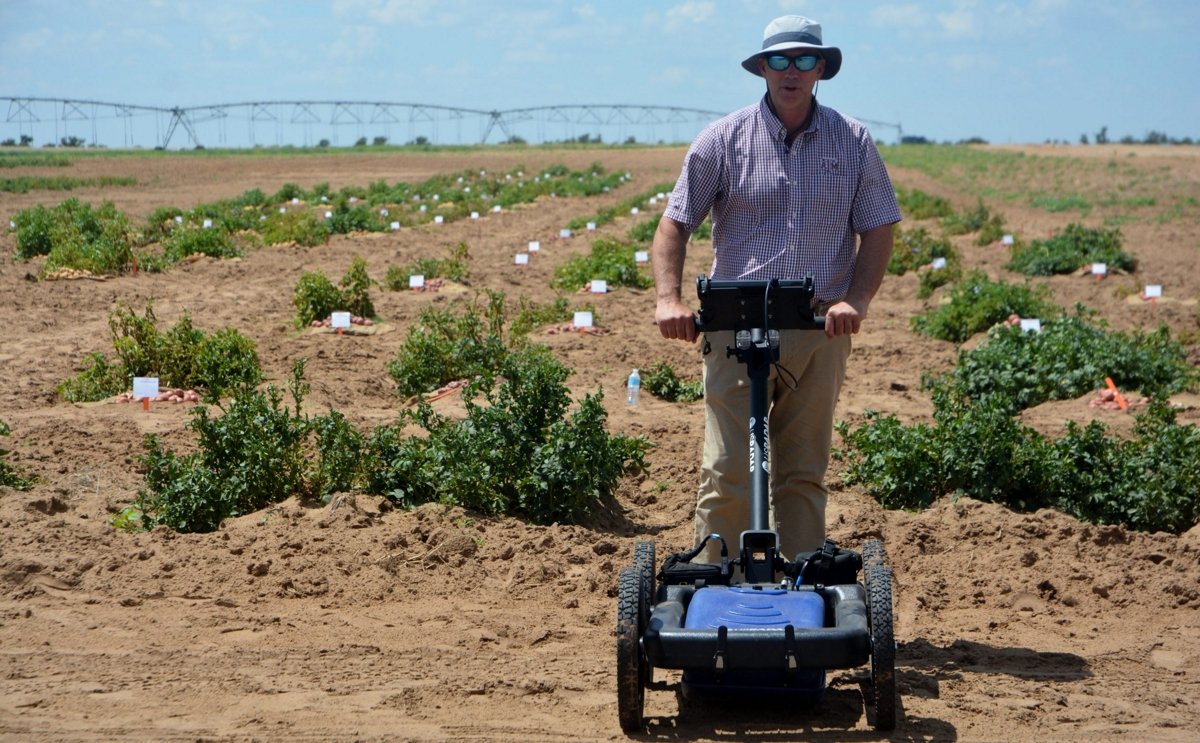 Ground-penetrating radar might help the potato industry save water, according to Dr. Dirk Hays, Texas A&M AgriLife Research plant geneticist in the soil and crop sciences department at College Station.

His project is in coordination with AgriLife Research and the department of horticultural sciences potato breeding program conducted by breeders Dr. Creighton Miller and Dr. Isabel Vales, both at College Station.

“We know radar will work on potatoes.”

“Radar works on detecting objects that are denser than the soil environment they are in.”

“Potatoes are very moist versus the sandy soils they are grown in, so it’s relatively easy to image the potatoes with the ground-penetrating radar.”

He said under the current practices, the potato breeding program might start with 80,000 individual lines in early generation trials aimed at selecting high-yielding cultivars, and all lines are harvested at 120 days.

“If you want to select for earliness, say a cultivar that is mature at 90 days or 110 days, you would have to replicate the planting of that cultivar multiple times to allow for multiple harvests.”

“The vegetative nature of the plants and the need to dig up the potatoes doesn’t allow them to select for early maturity.”

“But with ground penetrating radar, they can image the size of the tubers and get a correlation to the actual physical size of the potato without harvesting them.”

“When we do that, we can get an almost one-to-one relationship between the digital image of the potato and the actual weight of the potato.”

“Even with a high frequency GPR antenna, we are penetrating 6 feet in clay soils and 10 to 20 feet in sandy soils.”

“So potatoes are a dream for GPR.”

He said the early generations of those cultivars can be scanned and breeders can start selecting lines producing a high yield at an earlier rate without having massive trials and multiple harvest times.

“We might be able to help them select for new cultivars that are ready at 90 or 100 days and have a harvestable product.”

“What we are doing is increasing the water-use efficiency, because in potato production you are watering for 120 days.”

“If we can shorten the cycle of the crop, we can reduce the amount of water that needs to be applied.”

Earliness in potatoes is also important for Texas producers in terms of being first to market versus northern states, Hays said. As such, the Texas potato crop commands a premium price. The premium price is short-lived, however, as potatoes begin to ripen and are harvested in more northern producing states.

“So another benefit to breeding for earliness in Texas-adapted potatoes would be to lengthen the harvest window that producers can sell at premium prices.”

Hays said this project initiated from a separate project using the same technology for earliness on cassava or tapioca, a small tree with roots that bulk up into a starchy product much like a potato.

Cassava in Africa is considered to be the drought-security crop, he explained. But cassava bulks and goes through productivity and harvest at 1- or 2-year cycles. Cassava breeders want to select for new cultivars that bulk at six to eight months to increase the cycle time of the crop.

“They have the same problem as potatoes, it’s a vegetatively propagated crop so they have to make these massive yield trials where they have multiple harvest times with each one dug up.”

“We hope in the near future we will be able to select for cassava and provide a 50 to 100 percent yield gain because we’ve increased the cycle time per year, allowing them to grow two crops instead of one in a year or grow three crops in two years.”

Hays said his project has an additional objective – to optimize the equipment itself.

“These ground-coupled instruments have to contact the ground to select for earliness, and that’s a little bit of a problem.”

“It means you are basically running over the crop, damaging it during the development process.”

He said he is working with a company called IDS GeoRadar North America to optimize the instrument itself so it is airborne and flies just above the canopy.

“This way we can get a three-dimensional image through a crop canopy and into the roots.”

“We can go over the yield trials multiple times through the growing cycle without damaging the vegetation.”

He said they hope to have this equipment tested as a prototype this fall with a commercial instrument available shortly after.