Asia includes the world's potato giant, China, which accounts for more than 20 percent of both the global potato-growing area and the world potato harvest. 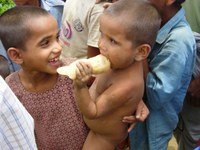 Improving incomes and nutritional health in Bangladesh through potato, sweetpotato, and vegetables

Poverty affects 40 percent of people in Bangladesh, and malnutrition is among the highest in the world, with 56 percent of preschoolers underweight. In an effort to combat these alarming numbers, the International Potato Center (CIP) is launching a ne...
Lees meer
Bangladesh
Landbouw Statistieken Azië
Consumptie Statistiek Azië

Other Regions in Wereld :
Refine by Gebied