The first reference to potato in Cuba dates from 1798, when a land-owner complained about a shortage of suitable seed potato. In fact, the lack of varieties adapted to Cuba's tropical island climate discouraged generations of farmers from growing the tubers.

Since the 1970s, production has increased steadily thanks to the use of seed potato imported from France and the Netherlands, which can be reproduced locally for up to three consecutive years. Cuba's potato output reached a record 370 000 tonnes in the year 2000 and, since then, annual harvests have averaged more than 300 000 tonnes.

Yields have doubled since 1990 - today, per hectare output is more than 24 tonnes, amongst the highest yields in Latin America and 50 percent higher than the world average. Production is concentrated in areas around the capital, Havana, and is used mainly for french fries. Annual per capita potato consumption is around 30 kg. (Source: International Year of the Potato) 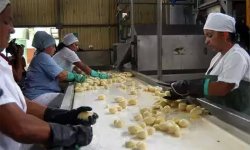 Other Regions in Caribische eilanden :