The potato was probably well established in Morocco before the country became a French protectorate in 1910. Over the following century - and particularly since independence in 1956 - production has expanded strongly, rising from about 150 000 tonnes in 1961 to a record 1.56 million tonnes in 2006. In the same period, yields grew from 10 tonnes per ha to more than 26 tonnes.

By sheer weight, the potato is now Morocco's third biggest crop, after sugar beets and wheat, and second only to tomatoes among exported vegetables, with more than 40 000 tonnes shipped to Europe in 2005.

Except for a brief period during the winter months, potatoes are grown year round. Production of fresh potatoes is concentrated along the Atlantic Coast north and south of Casablanca, where a modified Mediterranean climate provides very favourable growing conditions. Potatoes are also grown in high, rugged parts of the Atlas mountains, at elevations of more than 3 000 m. The average Moroccan consumes about 42 kg of potatoes a year. 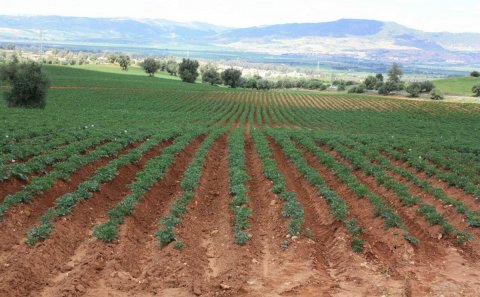 The Wageningen Research Foundation (WR), being subsidised by the Ministry of Agriculture, Nature and Food Quality in the context of the Policy Support 'Sustainable agricultural development in a food system approach' published a study on the potato value chain in Morocco.
Marokko
Potato Supply chain
Landbouw Statistieken Marokko
Consumptie Statistiek Marokko