Signal pathway in the brain that controls food intake discovered 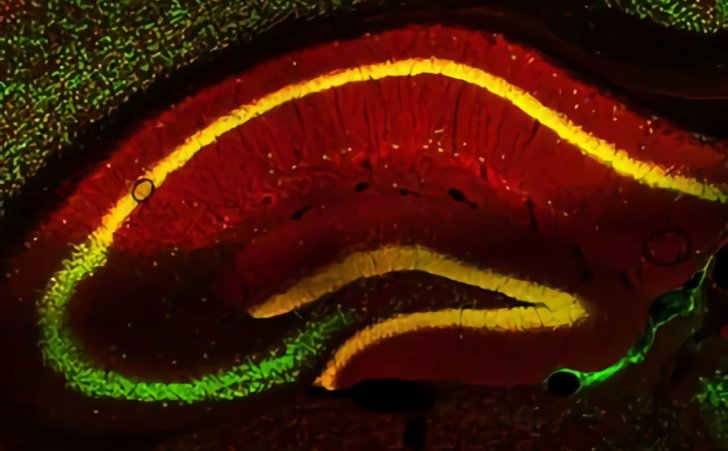 Johannes Vogt: Nerve cells of a mouse brain (green) and the protein PRG-1 (red). If the nerve cells contain PRG-1, the cells appear in yellow.

The brain controls our body’s lysophospholipids, which in turn control a programme that activates nutritional intake / specific inhibitors of lipid synthesis could serve as new obesity therapies / publication in 'Nature Metabolism'.

A group of researchers has developed an entirely novel approach to treating eating disorders. The scientists showed that a group of nerve cells in the hypothalamus (so-called AgRP, agouti-related peptide neurons) control the release of endogenous lysophospholipids, which in turn control the excitability of nerve cells in the cerebral cortex, which stimulates food intake.

In this process, the crucial step of the signalling pathway is controlled by the enzyme autotaxin, which is responsible for the production of lysophosphatidic acid (LPA) in the brain as a modulator of network activity.

The administration of autotaxin inhibitors can thereby significantly reduce both excessive food intake after fasting and obesity in animal models. The article ‘AgRP neurons control food intake behaviour at cortical synapses via peripherally-derived lysophospholipids’ has now appeared in Nature Metabolism.

Eating disorders and especially obesity are one of the most common causes of a variety of diseases in industrialized societies worldwide, especially cardiovascular diseases with permanent disabilities or fatal outcomes such as heart attacks, diabetes, or strokes.

The Robert Koch Institute reported in 2021 that 67 percent of men and 53 percent of women in Germany are overweight. 23 per cent of adults is severely overweight (obese). Attempts to influence eating behaviour with medication have so far proved ineffective.

A novel therapy that modulates the excitability of networks that control eating behaviour would be a decisive step towards controlling this widespread obesity. The research team found an increased rate of obesity and the attendant type II diabetes in people with impaired synaptic LPA signalling.

Through active transport, LPC reaches the brain, where it is converted by the enzyme autotaxin (ATX) into LPA, which is active at the synapse. Synaptic LPA signals stimulate specific networks in the brain, thus leading to increased food intake.

In the mouse model, after a period of fasting an increase in LPC in the blood led to an increase in stimulating LPA in the brain. These mice showed typical food-seeking behaviour. Both could be normalized by administrating autotaxin inhibitors. Obese mice, on the other hand, lost weight when these inhibitors were administered continuously.

Johannes Vogt, Professor at Faculty of Medicine, University of Cologne:

"We saw a significant reduction in excessive food intake and obesity through gene mutation and pharmacological inhibition of ATX."

"Our fundamental findings on the LPA-controlled excitability of the brain, which we have worked on for years, therefore also play a central role for eating behaviour."

"We saw a significant reduction in excessive food intake and obesity through gene mutation and pharmacological inhibition of ATX."

"Our fundamental findings on the LPA-controlled excitability of the brain, which we have worked on for years, therefore also play a central role for eating behaviour."

Robert Nitsch, Professor at Faculty of Medicine, University of Münster:

"The data show that people with a disturbed synaptic LPA signalling pathway are more likely to be overweight and suffer from type II diabetes."

"This is a strong indication of a possible therapeutic success of ATX inhibitors, which we are currently developing together with the Hans Knöll Institute in Jena for use in humans."

These findings on the excitation control of neuronal networks in eating behaviour through lysophospholipids and the new therapeutic possibilities they suggest could in future contribute not only to treating eating disorders, but also neurological and psychiatric illnesses.
Источник
University of Cologne
Хотите получать подобные новости по электронной почте? Присоединяйтесь и подписывайтесь!