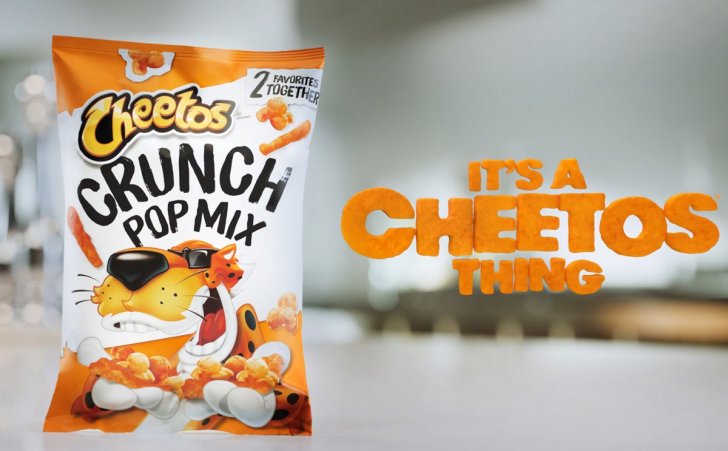 Cheetos reclaimed its Super Bowl icon status last year and is back this year with the launch of a campaign and Super Bowl commercial featuring serious star power alongside a seriously delicious snack: newly released Cheetos® Crunch Pop Mix.

Today, fans can get a preview of the Super Bowl ad in a teaser that features actor, venture capitalist and philanthropist Ashton Kutcher, who discovers some shocking evidence — mysteriously tied to Cheetos Crunch Pop Mix.

So what will Ashton do with this Cheetle-coated evidence? And what other celebrity star power will he bring into his dramatic — yet mischievous — story? Fans will have to wait until Super Bowl Sunday for the big reveal but can view this teaser today on Cheetos' social channels or by clicking on the image below.

Cheetos Crunch Pop Mix is so popular, it's sure to be the most coveted snack this game day. In fact, the excitement surrounding the new snack mix has inspired Chester Cheetah to issue a mock advisory warning that the new product is so tantalizingly delicious, fans are likely to sneak a few bites from another family member's stash.

Chester even rolled out a survey to back his theory: According to a recent consumer survey commissioned by Cheetos, nearly half of Americans (48%) admit to sneaking snacks from friends or loved ones, and among those, one in four (25%) even admit to doing it with some regularity*.

"Following the success of Cheetos' big return to the Super Bowl last year with our biggest innovation in a decade in Cheetos Popcorn, we had to dial up both our product and Super Bowl campaigns this time around. I humbly believe we've accomplished that with new Cheetos Crunch Pop Mix, bringing fans their two most beloved flavors in Cheetos Popcorn with Cheetos Crunchy."

"And we're bringing it to the biggest stage with the help of the multi-talented Ashton Kutcher, who we're thrilled and honored to work with."

Cheetos Crunch Pop Mix also ties into recent food and snack mashup trends that emerged during 2020, including the infusion of snack mixes into mealtime occasions and Cheetos recipe searches skyrocketing 190%. This led to other innovations and campaigns such as Cheetos Mac 'n Cheese, a Cheetos cookbook and even a new PepsiCo Foods North America recipe hub, MoreSmilesWithEveryBite.com.

It's a Cheetos Thing

The campaign will continue to be supported through all of the primary channels, including this year's Super Bowl TVC; in-store; out-of-home; and digital.

*This poll was conducted by Morning Consult between December 18-December 20, 2020 among a national sample of 2,200 Adults. The interviews were conducted online, and the data were weighted to approximate a target sample of Adults based on gender, educational attainment, age, race, and region. Results from the full survey have a margin of error of plus or minus 2 percentage points.
Bron
Frito-Lay
Wil je nieuws zoals dit per email ontvangen? Maak een account aan!
Genoemde Bedrijven

Cheetos is one of the many Frito-Lay brands.