Potatoes were introduced to Cameroon during the German colonial period (1884-1914), but widespread cultivation probably began in the 1940s, following the introduction of new varieties by the British and Dutch governments. The crop was especially well received by farmers in the highlands of western Cameroon, where it proved to be well adapted to the high plateaus. In the later 1940s, degeneration of potato seed (probably due to viral infection) and late blight infestation reversed the crop's initially strong inroads, especially in the extreme southern regions.

Potatoes are an important crop in Cameroon, ranking fifth in tons produced among the major staple crops (behind cassava, plantain, cocoyam/taro, and maize).

Over 200,000 farmers grow potatoes in Cameroon, mostly smallholders and very predominately women. A 1982 survey reported that over seventy percent of potato farmers in Cameroon are women, an estimate that rose to over ninety percent in 2001. Most marketing is fairly local, but marketing channels are well organized, often under the direction of women (Source: CIP World Potato Atlas). 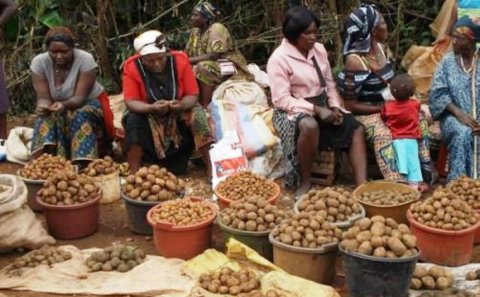