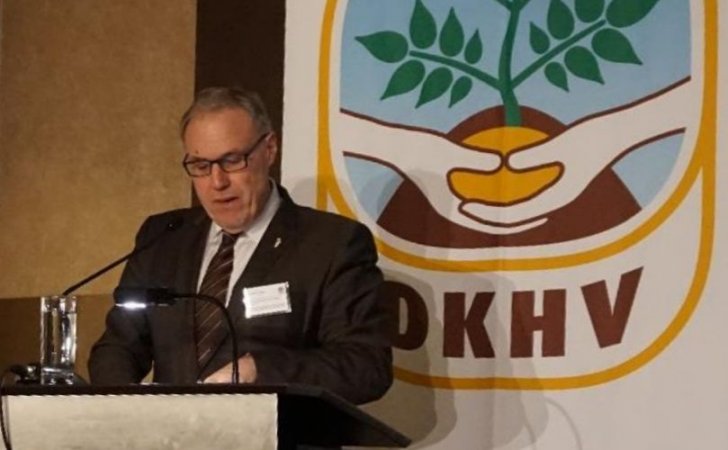 On 6 February, the German Potato Trade Association DKHV welcomed around 500 guests from 16 countries to the traditional International Berlin Potato Evening.

The Berliner Hilton on the Gendarmenmarkt provided the perfect setting for the exchanges and discussions between the experts.

In his opening speech, DKHV President Thomas Herkenrath called for more attention to discussions on food and agriculture.

"Potatoes are an important staple food and can best meet the high ethical demands of consumers and their desire for a healthy diet in cultivation, processing and distribution.”

“The potato industry only has to present itself more self-confidently to the public in order to be perceived more positively by the consumer.”

“This means listening carefully and analyzing the worries, fears and needs of our customers. We constantly have to question ourselves and openly and critically review our production processes in terms of sustainability and necessity.”

“Even though our potato accounts for only a small share of the total agricultural production area, we also bear great responsibility for future generations.”

For example, many of the DKHV in the past year member companies have focused their activities on the preservation of biodiversity. Flower beds, insect hotels or orchards are valuable measures for this purpose.

Herkenrath pointed out that the potato industry has achieved great success: After years of declining potato consumption, sales increased by 1.6% in 2017 compared to the previous year. The work of Kartoffelmarketing GmbH - founded in 2015 through an initiative of the German Potato Trade Association - has contributed significantly to this. And it has taken many successful measures to promote the image of the potato.

Herkenrath warmly welcomed the President of the World Potato Congress (WPC), Romain Cools. He was the first European to be elected to this position. The 10th World Potato Congress in Peru, the birthplace of the potato, has the motto ‘A glimpse into the future of the potato: biodiversity, food safety and business’ and offers a comprehensive professional, discussion and excursion program.

Cools cordially invited all European attendees to partake in this extraordinary event in the Cuzco region.

Deutscher Kartoffelhandelsverband e. V. (DKHV) is an association of the German potato traders