Ventilation costs a lot of electricity and has become pricey now that energy prices are going through the roof. One stroke of luck is that the latest generation of fans is much more energy efficient.

Fans come in all shapes and sizes. But every fan has an optimal control range in terms of rpm, airflow and energy consumption. Modern fans with a direct current motor (EC type) achieve an efficiency of 30 to 60 percent effective airflow. In addition, the back pressure in Pascal (Pa) determines which type of fan is best for which application.

For example, with a pressure difference of 150 Pa in box storage, this requirement is different from bulk onion storage with pressure differences of up to about 350 Pa. Simply considered, the fan power could be lower in the former case and a fan blade would suffice with fewer blades.

In the latter case, the fan blade needs more blades and higher power. Therefore, the most optimal setup is chosen for each application, allowing the fan to run at its maximum speed as much as possible.

The fan consists of a fan housing with mounting brackets on which the electric motor is mounted. Remarkably, the shape and placement of the motor supports determine a significant part of the ambient noise. The Tolsma ACM fan is driven by a permanent magnet synchronous motor, or PM motor.

In these motors, the speed control (an electronics box) is placed outside the motor, avoiding exposing this technology to vibration.

Another feature of this PM electric motor is its flat shape and lower maximum speed. This type of motor is on average 30 percent more economical than a standard asynchronous induction motor. Tolsma’s latest development is the curved blade.

This contributes to higher efficiency in air movement and less noise. The blade is as wide against the fan blade shaft as it is at the tip. However, the position of the blade varies with the radius.

Furthermore, the blade has the external characteristics of an airplane wing, which helps the airflow. An additional advantage of an ACM fan is that it can easily rotate backwards, so the fan sucks instead of blows.

Saving energy (reducing costs) is an important criterion in ventilation. A possibly even greater effect is ventilating at the right time, as this can reduce ventilation time. A quieter fan means gain for the environment, but also for the wallet. At current energy rates, the payback period of modern fans with a PM motor is shortened. Moreover, the purchase of energy-efficient fans is fiscally attractive. 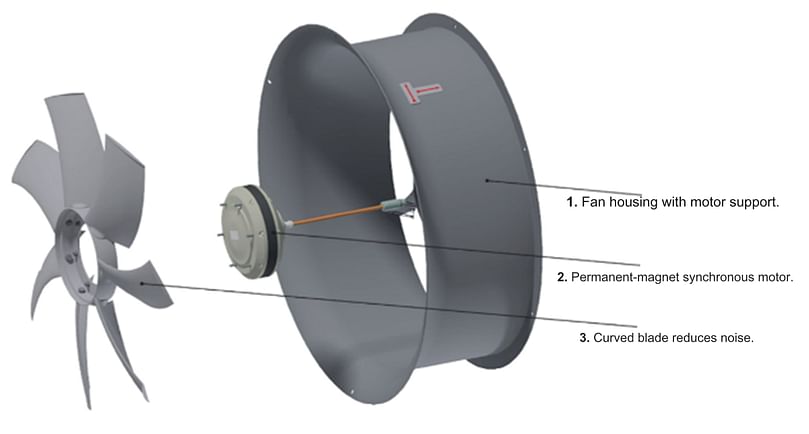 Tolsma-Grisnich is a Dutch specialist in intelligent storage technology and the company is renowned for automating and optimising the processing of agricultural products.
产品

The new ‘Air Control MAX’ fan for (potato) storage ventilation is innovative on 3 features: 36% reduction in noise level, Up to 35% fewer r.p.m., Air output up to 7% higher.
Contact Tolsma-Grisnich