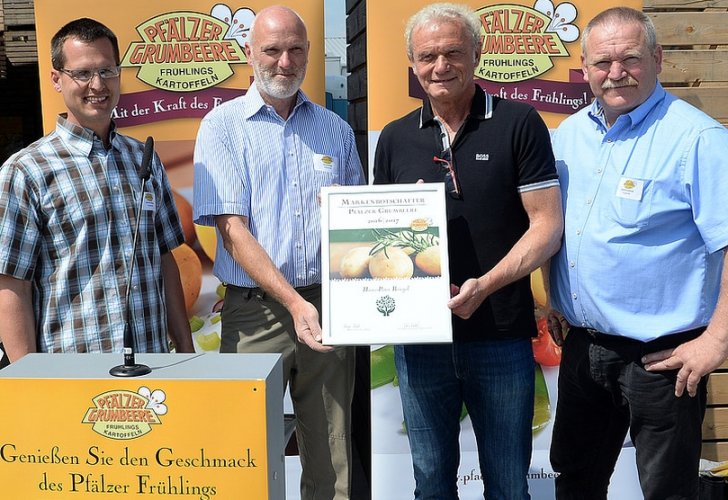 In the German Pfalz region, farmers officially kicked off the harvest of the first German new potatoes. A former soccer player on the national team, Hans-Peter Briegel, was named Pfalz potato ambassador for the season 2016/17.

Since the harvest started on only a few of the 303 farms the fresh potatoes will in the beginning mainly be sold at the farms and at street markets in the direct surroundings of the farms. The first potatoes that reach the market were grown under plastic.

The first new potatoes, planted in February, are of the varieties Annabelle or Berber and only a few are ready for harvesting.

“The warm weather in the last few days has caused a real growth spurt! And the quality and taste of the first new potatoes from our region is excellent.”

The current weather is the reason that the farmers’ organization expects a quick increase in the amount of the harvested new potatoes from the Pfalz region. If the good weather remains the larger markets can be supplied.

The expectations are that the Pfalz potatoes can be found in supermarkets from mid June.

The 303 potato farmers can profit from natural resources

The quality and harvest predictions show that the 303 producers of potatoes that this season can profit again from the natural advantages.

“After some odd weather conditions in March, we are now back on track of the crop forecast."

Together with the connecting region in the east (the southern parts of Rheinhessen) 4,000 hectares are used for the cultivation of new potatoes. In 2016 about 1,200 hectares of the potatoes are cultivated under plastic or in tunnels, so the potatoes can be harvested earlier. Thanks to the protecting plastic the heat and the energy of the sun can be stored and the soil heats up faster. And so the farmers can move the first harvest forward by about 10 days.

The new potatoes are delicious, versatile and healthy and don't need to be peeled (Courtesy: Pfälzer Grumbeere)

The early varieties Annabelle or Berber need 80 to 90 days to grow and this ensures the first position of the region compared to other German regions. During the season’s high point, the beginning of July, the daily harvest is about 3,000 metric tons, this amount corresponds to 120 trucks.

The „Pfälzer Grumbeere“ need good care and the right timing

“To supply the growing amount of Palatine new potato lovers at the right time, our 303 potato producers need perfect timing and to take good care during the harvest!”

Compared to other vegetables the new potatoes with their paper-thin skin need an extra fast chain of supply. New potatoes don’t need to be peeled, a good wash is sufficient. This way the valuable vitamins, minerals and fibers, which can be found directly under the skin, remain in the potato while preparing them. The new potatoes are delicious, versatile and healthy.
Bron
Freshplaza / Pfälzer Grumbeere
Wil je nieuws zoals dit per email ontvangen? Maak een account aan!
Lees meer over:
AardappelketenVroege aardappelen