The Prince Edward Island potato industry gathered for its annual awards dinner for the first time since 2020. COVID-19 had put the banquet on hold for the past two years. There were many challenges during those years, including COVID-19, Hurricane Fiona, and, most notably, the potato wart crisis of 2021-22.

The Board also recognized retired MP Wayne Easter for his work during the crisis. Although he was no longer a member of parliament, he was still there for the potato industry last year, making trips to Washington and Ottawa, as well as providing persistent correspondence to key contacts to support our industry.

Gerald "Jeddy" MacFadyen was only sixteen when his father passed away, and he and his brother were tasked with taking over the family farm. His dad, Edward, and his cousins were pioneers in the seed potato industry in PEI. 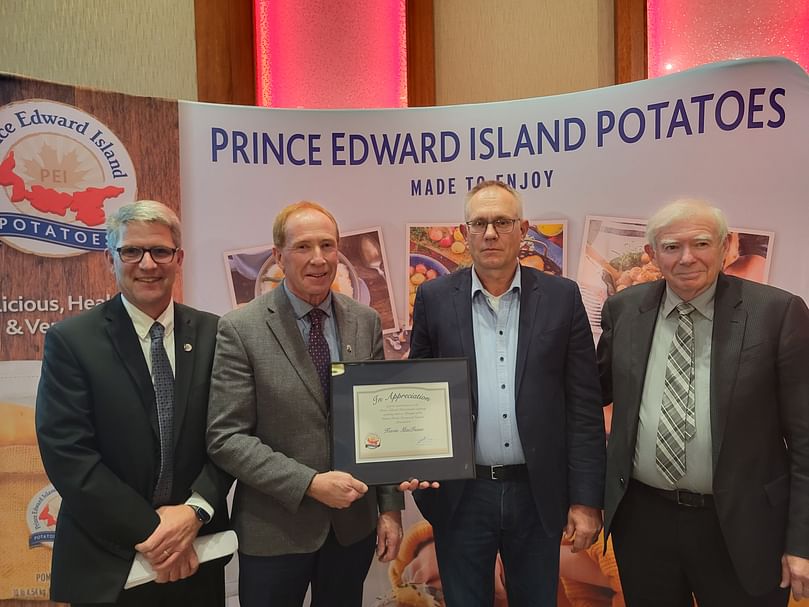 In the early years of commercial potato production, he was one of the largest potato farmers in PEI, growing 100-175 acres. This was remarkable in the early labour-intensive days that preceded modern farming technology. Jeddy has participated in the growing of over eighty potato crops.

He has left an incredible legacy for his sons and now grandsons, making MacFadyen Farms Ltd. a fourth-generation farm. Jeddy and his wife Joyce have been exemplary community citizens and have contributed to all facets of community life, enriching the lives of all in his church and community.

Ninety-six-year-old Jeddy was there in person to receive the award with his wife and family.

John Robinson, his father Eric, and his brother Allan operated Eric C. Robinson Inc. in Albany, PEI, for many years.

Their business consisted of a farm, packing shed, and potato dealership, as well as selling grading equipment, handling equipment, cultivating equipment, seed cutters, fertilizer, and crop inputs. John’s chemical engineering background enabled him to give expert advice to his customers. Over the years, John gained a reputation as a fair and honest man. Their farm was cutting-edge and led the way in trying new crops and production techniques.

They were the first in their communities to employ soil conservation techniques, strip cropping, terraces, berms, hedgerows, and more, practicing sustainable agriculture before it was a buzzword.

Much success can be attributed to his wife Hazel, who was also very involved in the operations. Philanthropy and support of their community are also a big part of their identity. In 1988 John and Allan banded with six other family farms to construct and operate Mid-Isle Farms Inc., a state-of-the-art packing and washing dealership.

John was involved with developing the Canadian Potato Marketing Agency to help align potato supply with demand. His communication skills are excellent, particularly his listening skills. Mary Robinson and Adam Wight were on hand to accept the award on behalf of John.

Kevin MacIsaac brought industry insight from many different angles. Kevin grew up on his family’s farm in Bear River, PEI. He spent some time as a crop specialist in NB after completing his Bachelor of Science with a focus on Agriculture from the University of Guelph before returning to his family’s farm, where he was involved with dairy, potato, grain, and forage production. 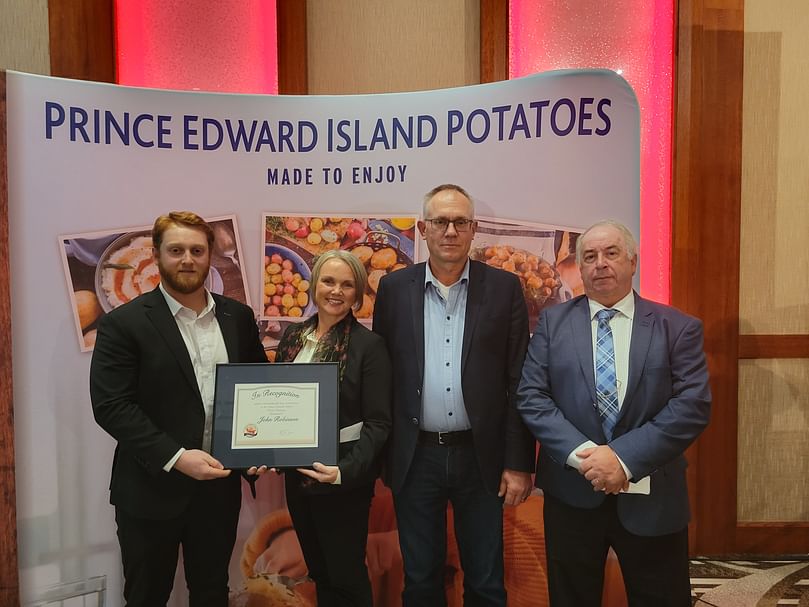 He served in executive positions with the PEI Soil and Crop Improvement Association, the Prince Edward Island Potato Board, and other organizations. He later took on the role as the General Manager of the United Potato Growers of Canada (UPGC), working to promote information sharing between Canadian Provinces and our United States counterparts.

Kevin provided great industry support for over ten years in this role. Kevin has been a great spokesman for the industry and worked very hard with his US counterparts during last year’s potato wart crisis. Kevin retired from UPGC this year. Kevin was with his wife, Nancy, to accept the award.

There was a moment taken for the 2021 recipients Peter McKenna, Charles and Wilhelmina Murphy, and Morely Wood since the Board could not have a banquet last year.

The industry acknowledged outgoing board representatives Mark MacMillan, Mary Gillis and Young Farmer Michael Ramsay for their time on the board. New Board members Ian Shaw and Katie MacLennan were welcomed.

Current Potato Board chair John Visser received recognition for completing his first year as chairperson and for rising to the significant challenges as the Board’s leader during a difficult year.

In a reversal of roles, the board of directors shifted the script and offered a plaque as recognition to the PEI Potato Board staff for their hard work during the Potato Wart Crisis.

It was a great evening celebrating after years of complex challenges. The potato industry is an integral part of PEI, and it was an excellent opportunity to give thanks to those who have been and are working to keep it that way.
来源
Prince Edward Island (P.E.I) Potato Board
想通过邮箱接收更多新闻？一起来订阅吧！