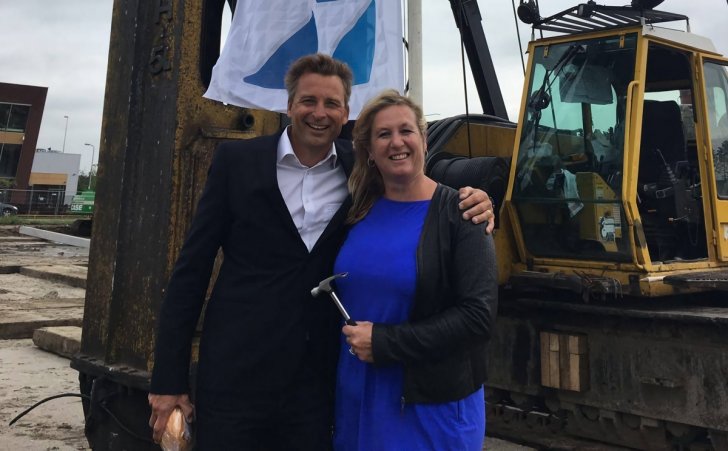 Martin Prakken, owner and CEO of BluePrint Automation at the groundbreaking ceremony in Woerden in May.

On May 24th, BluePrint Automation (BPA) celebrated the first pile driving for a new plant in Woerden.

It was a big surprise and honor for Dick van Weenen and his wife Jacqueline who were given the honor of hitting the first pile. Dick van Weenen has worked for more than 25 years at BPA and supervised the construction of the previous business premises.

Owner Martin Prakken decided that Dick and Jacqueline would hit the first pile in the presence of mayor V.J.H. Molkenboer and councilor M.J. Schreurs. All employees of BPA were able to witness the groundbreaking ceremony.

Impression of the festive groundbreaking ceremony.

BluePrint Automation was founded by Bob Prakken in 1980 and is now already in its fourth location within the town of Woerden. In 2000, BPA moved into the current building at the Oostzee 26 in Woerden, which was expanded in 2010 with additional office and production space. Thanks to the strong growth of the company the last couple of years, additional assembly in the immediate vicinity were necessary to cope with new space constrains.

In 2014, the decision was made to build a new factory on the former Den Oudsten site in Woerden. With the modular design and construction of the new building, it will not only be possible to fully integrate Racupack, but it also allows BPA’s continued growth in the coming years. The first phase of the new building will cover 13,000 m2 of construction, of which 2,200 m2 of offices and 11,000 m2 of production and assembly area. The maximum construction size on the 42,870 m2 plot will be expandable to 27,000 m2.

Before the first pile went into the ground, it was signed by all the employees of BPA. Everyone received a ''Friday afternoon -hammer", which also served as a bottle opener, with the inscription "The first hit - May 24th 2016", inaugurating the beginning of the new future of BPA.

With the acquisition of Racupack in 2013, BPA increased their know-how on carton handling, such as carton erecting and closing technology, as well as on carton wrap-around case-packers. Moving Racupack under one roof with BluePrint Automation, the synergies of both companies will further increase and new innovations of modular build case packing solutions with integrated carton handling are expected.

Artist rendering of the new building of BluePrint Automation in Woerden, the Netherlands. Construction is planned to be complete in early 2017.

With approximately 400 employees at production sites in the Netherlands and the USA and sales and service offices in Germany, France, England, Australia, China and South America, hundreds of BluePrint Automation case packing systems are successfully installed worldwide each year.