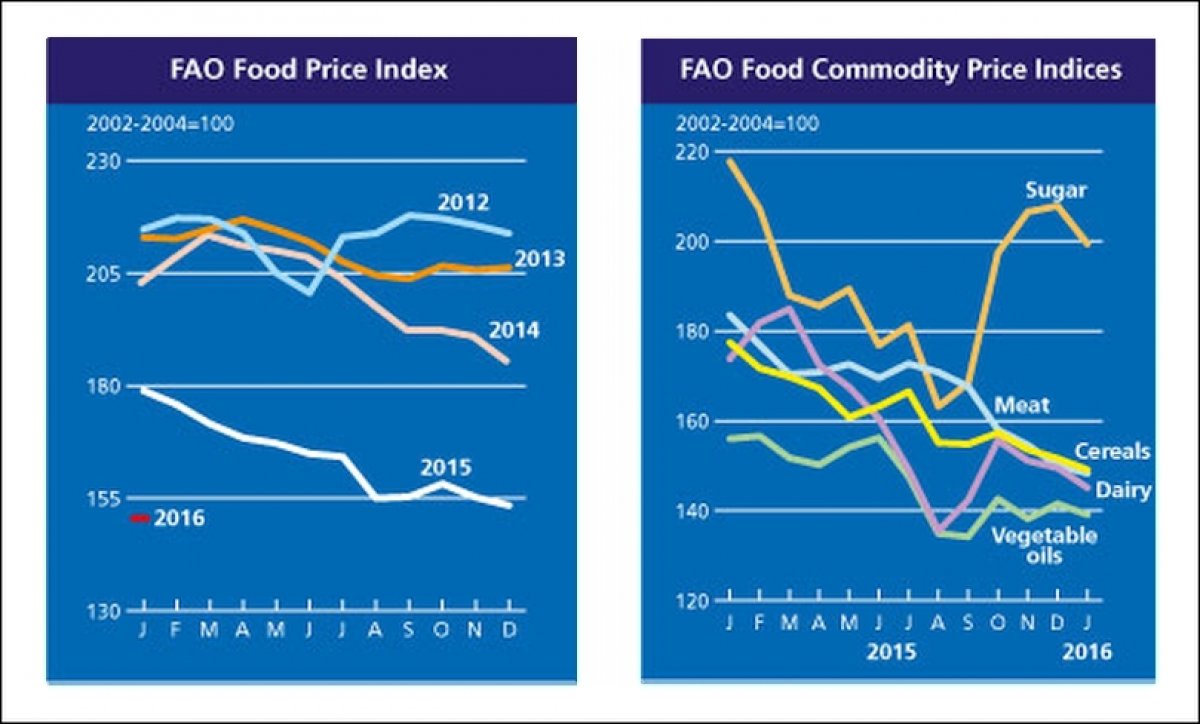 The prices of all the commodities tracked by the Index fell, with sugar and dairy products registering the steepest declines.

The FAO Cereal Price Index averaged 149.1 points in January, down 2.5 points (1.7 percent) from December. Ample global supplies, increased competition for export markets and a strong US dollar continued to weigh on international wheat and maize prices, with the US maize quotations falling to multi-year lows. Rice prices declined only marginally.

The FAO Vegetable Oil Price Index averaged 139.1 points in January, down 2.4 points (1.7 percent) from December. The slide was mainly caused by a marked drop in soyoil prices, reflecting expectations of ample global soybean supplies, notwithstanding lower than earlier anticipated production in the United States and Brazil. International palm oil prices were stable, as subdued global import demand was counter balanced by prospects of production slowdowns in the coming months.

The FAO Dairy Price Index averaged 145.1 points in January, down 4.4 points (3.0 percent) from December. Large winter milk production in the EU, better than anticipated availability in Oceania and torpid import demand have caused international prices of all the dairy commodities covered by the Index to dip, with Whole Milk Powder (WMP) being the most affected.

The FAO Meat Price Index averaged 148.3 points in January, down 1.7 points (1.1 percent) from its December revised value. Quotations fell for most categories, with the exception of pigmeat, which was stable, mainly due to the opening of EU aid to private storage in January. Sheepmeat prices were sharply lower, reflecting the beginning of the peak production period in Oceania, while a lacklustre demand weighed on the prices of poultry and bovine meat.

Part of the United Nations, the primary task of the Food and Agriculture Organisation (FAO) is to achieve food security for all
Read More
Related Topics
Food Trends
Food Prices