KLIM’TOP Controls’ core value and the reasons for its success are that the company has been able to adapt to a specific market and to meet the requirements of its customers who couldn’t find in the standard industrial supplies a proper answer to this concern.

The refrigeration sector requires a lot of energy. The operating costs in the farms are heavier and heavier. The electricity tariff has been deregulated since 2016. A technical answer is thus necessary in order to adapt the operating modes and optimise the supplier subscriptions.

The incentive for using renewable energies and their self-consumption is changing the supervision strategies. Thanks to its inertia, the storage of vegetables can be a means for storing solar energy. If solar panels (1) are available, cooling when the sun is shining will now be preferred whereas a night cooling used to be a better option.

The specification variability and the various types of vegetables require to store them in different rooms and in different conditions, while using the same production of cold. In this situation, energy choices have to be made too.

The electricity supervision must therefore evolve while aiming at adjusting the consumption of several machines at a producer’s. Moreover, it must help the farmer to make decisions which don’t only consist in reducing the power of some of his cooling units.

He must both be able to benefit from more explanatory and better presented data and integrate a set of parameters linked to the energy issue, the storage inertia, the vegetable quality, the weather forecasts, the producers’ habits…

Self - consumption management in the Klimanager software

Klimanager is a KLIM’TOP energy management software which was developed for supervising the operation of several vegetable storage rooms by taking into account several parameters such as:

Klimanager takes into account the operating phases of each KLIM’TOP cooling unit and the electricity production by using solar panels or wind power so as to regulate the machine operation and thus maximise self-consumption.

Klimanager will integrate an averaged production curve with a processing algorithm in order to mitigate the sinusoidal oscillations in the electricity production. For example, in the case of a photovoltaic system, these disturbances can be due to a short drop in luminosity caused by a passing cloud, or in the case of a wind system, they can be caused by a short drop in the wind speed. 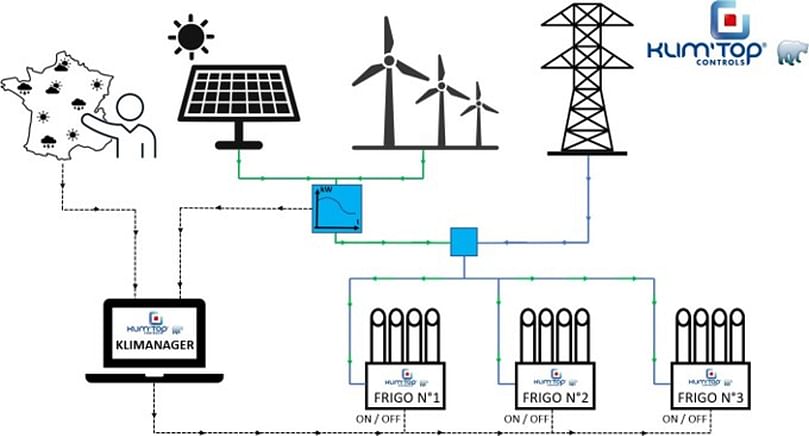 For the KLIM’TOP cooling units of the Green Line range (low energy consumption) which are equipped with frequency inverters, KLIMANAGER will be able to modulate the cold production power of each machine so that the total power consumed is less than the total power produced and thus operate in self-consumption.

Visit KLIM’TOP at Interpom 2022 on 27-29 November, to see their latest energy saving innovations
Source
KlimTop Controls
Like to receive news like this by email? Join and Subscribe!
Related Companies

Manufacturer of aeraulic and refrigeration equipment in the agricultural and agri-food sectors in Hardifort, France. The company offers refrigeration units dedicated to apple storage building of vegetables with turnkey, ready-to-install installations solutions.