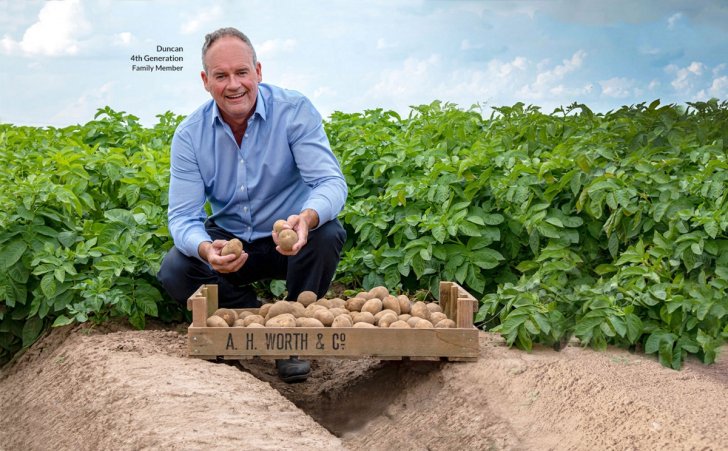 AH Worth CEO Duncan Worth speaks to Ed Leahy about his company’s rebranding as it sheds its old name, QV Foods

They say your brand is the most important investment you can make in your business, although a coffee machine surely comes a close second. Nevertheless, the time comes when old skin needs to be shed, and new ideas enshrined. For AH Worth CEO Duncan Worth, such a time came after he felt his brand’s former appellation QV Foods had run its course.

As a fourth generation grower, Worth decided it was time to reconnect with his heritage as a way of recalibrating for the future. The Lincolnshire business now produces a range of vegetables, while staying true to its origins with a range of prepared and table potatoes remaining the core offering.

Duncan Worth, AH Worth CEO :

“We felt we needed to bring the brand back into the family fold. QV Foods didn’t quite fit. We think it’s the right direction and an opportunity to assess our values, work through what those values are, and roll them out through the business.”

While the name AH Worth (named after founder Arthur Hovenden Worth) has always remained the holding company title, the company’s customer-facing brand was christened QV Foods in 1996 (an acronym of Quality and Value). By dropping that tag and unifying the brand under the AH Worth banner, Worth says he has already felt a boost in brand energy.

“We’ve had really great support for it. Our customers said they didn’t understand what QV was, but they definitely understand AH Worth. It’s been wholeheartedly embraced by our customers and suppliers.”

“You have to invest to ensure that the business prospers, whether that’s investing in robotics or NPD for the prep side. To drive it forward we have to be looking at new products. We’re setting ourselves up to move our production forward through investment and robotics, and moving our produce offering forward.”

“Turnover from potatoes is still the largest side of the business but the growth is in the prepared side. We have invested £3 million in the past 18 months. That shows we have the capacity and machinery to take on the growth we have seen, but it’s not easy.”

The rebrand comes on the back of a good year for the company in 2018, returning to profitability following a company restructuring. The new title also pays tribute to a history of innovation, with founder Arthur Worth having helped pioneer the Lincolnshire Potato Railway, which brought about much faster transportation of potatoes from his Manor Farm gate to the London markets in the 1920s.

While remaining primarily a potato grower, the prepared side of the business is where Worth sees the biggest growth opportunity.

Worth cites the supplier’s roast potatoes with Wagyu beef fat as one prepared product to have come through the ranks and do well in retail sales.

Recent production innovations at the company include expanding its water supply for irrigation by collecting it from the site’s roofs, as well as cleaning up and reusing water from potato washing, to make up for high salinity in the groundwater from the area.

In 2015, AH Worth also had an Anaerobic Digester constructed, from which they extract a nutrient-rich liquid which they use as a first application for the wheat crop in spring, reducing the company’s fertiliser demand.

Keeping with the times, AH Worth are investing a significant amount of resources into minimising plastic use wherever possible, whether through shortening sealing areas in vertical form filled plastic packs, shaving off 2cm in length, or using viable plastic alternatives such as paper sacks or punnets made from natural renewable materials.

With a new name to boldly go into the future, AH Worth will face many challenges. Competition for volumes in the retailers is high, which puts huge pressure on all businesses, but Worth acknowledges that 'competition is healthy'.

As a predominantly domestic producer, Brexit doesn’t carry the threat it does for other businesses, but Worth says the company could be stung on potato exports to Europe, with Polish supermarket Biedronka recently delisting UK potatoes from its stock.

“There is demand in Europe for the 45-65mm potatoes so we have been doing some of that. But we just need certainty (on Brexit).”

In 2019 the company named QV Foods (Quality and Value) was rebranded A.H. Worth. The UK company is growing and packing potatoes and vegetables for Retail, Food Service and supplies bulk produce both Fresh and prepared.