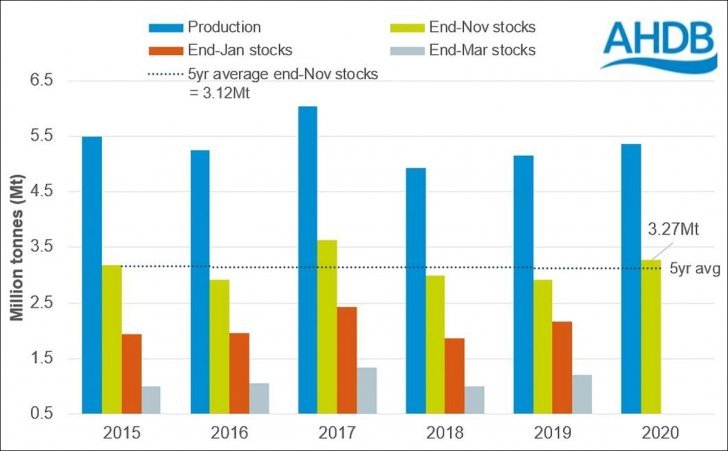 An increase in potato stocks in great Britain will be no surprise to many. The 2020/21 season has seen increased production alongside lacklustre demand from the impacts of the ongoing global pandemic.

However, the detail shows some sectoral differences, and therefore it is important to remember the following points:

On-farm stocks up year-on-year for packing and bags

39.0% (2.1Mt) of this season’s crop moved out of grower ownership by the end of November. As a percentage of total production, drawdown has been slower this season compared to 2019, but has been in line with 2018.

It is important to remember at the start of the season, consumers were able to eat out of the home and this may have had an impact on retail sales in these months. Very different from habits seen at the end of last season, and again now.

In the last few months, the country has been experiencing lockdowns once again. As a result, we have seen prices firming for packing material as consumers drive retail sales. This could reflect in the end-January stocks.

Similarly, the fresh chipping and bags sector has witnessed a rise in the end of November stocks to 415Kt. The rise is driven by increased sector production. Chip shop demand this season has been reportedly steady, though outlets were able to pick up the tail-end of the summer trade even if this was to a lesser extent.

Processing sector tells another tale, but what’s causing this?

Processing (and other ware) material in grower ownership, as at the end of November 2020, is estimated at 797Kt. This is 12% lower than November 2019 and driven by an increased rate of drawdown year-on-year (by 10%), to total 59% of production moved off-farm.

This may leave some scratching heads, considering the current demand situation. Though, it is important to consider these stocks are grower-held and consequently not accounting for material in processor ownership.

In addition, when considering the key processing regions, many growers experienced wet weather during lifting. This could have impacted on the quality of processing material, causing growers to have sold straight from field to avoid storage issues.

Some processing material may also have moved into other outlets. This survey does not capture where potatoes move to, just their original intended market.

What does this mean for the rest of the season?

It is unsurprising that overall end of November stocks are lagging previous years, with the pandemic continually impacting consumers eating and purchasing habits.

Since the end of November retail demand has been relatively strong, with restricted movement across the country for much of December and all of January; this will likely show in the end of January stocks survey.

Drawdown of packing material is expected to increase in the next stocks survey, as consumers have had limited ability to eat out in recent months. Higher production has allowed stocks to remain plentiful this season, although this is likely to differ by variety.

Though, the roll-out of the vaccine is underway, vital for the return to normality, and easing of restrictions in the coming months. Demand for processed and fresh chipping potatoes rely on this to boost demand. However, we could see a reduced need for raw material if processors have an abundance of supply in their own ownership.