Inside Walkers - the biggest crisp factory in the world 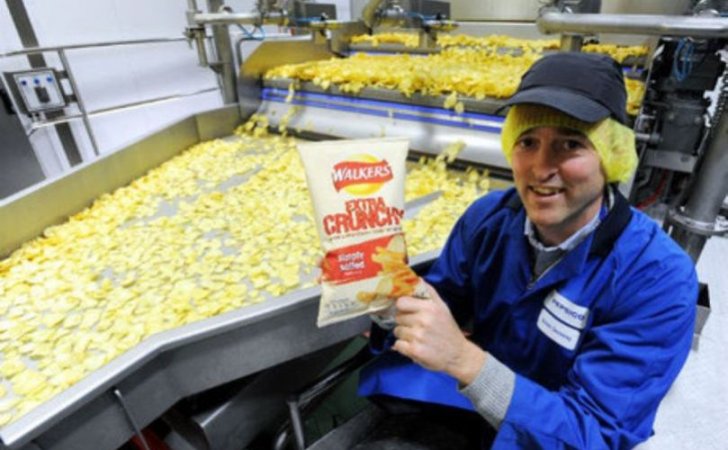 the Leicester Mercury brings you this seldom-told story of The Biggest Crisp Factory in the World, a vast grey building in Leicester (United Kingdom) where Walkers produces seven million bags of potato chips (crisps) every day.

The factory – you smell it before you see it; a heady whiff of fried potatoes hangs over the 16-hectare site – is the envy of the crisp-making world. They come here, crisp-makers from America, Europe, all corners of the savoury snack-loving globe, to see how Walkers do it.

The site, bought by the company in 1982 to prepare for a predicted rise in demand, has put Leicester on the map, not just in the UK, but also around the world.

So how do they do it? How does it work? How do they make the best crisps in the land at The Biggest Crisp Factory in the World?

This is what we wanted to know. It seemed to take a long time to find out. There were phone calls to Walkers, diverted to a big PR firm in London, more e-mails and endless conversations that seemed to drag on and on.

They seemed to have more questions than us. It was like getting into Willy Wonka’s Chocolate Factory.

Finally, after months of to-ing and fro-ing a date was set.

Come over, they said. We’ll show you how it works.

Some of Walkers current potato chips

Walkers, a subsidiary of Pepsico, is the most popular crisp manufacturer in the United Kingdom, making 11 different varieties of crisp and maize-flavoured snack, selling about 60 million bags every week. Apparently, 99 per cent of the population eat Walkers crisps. In a vibrant snack market – we are, if nothing else, a nation of crisp eaters – Walkers is The Daddy. It has a huge market share.

The firm has six manufacturing sites around the UK, employing 4,000 people. The biggest plant, though, is right here, where 1,100 people work in two enormous factories – Bursom Road and Leycroft Road – and a huge, fully-automated warehouse where enough crisps are stored to sustain a small country.

This is snack-making on a scale so huge, so vast, it’s hard to take it all in. The factory operates 24 hours a day, 363 days a year. It closes on two days a year – Christmas Day and New Year’s Day. And yet all of this, this kingdom of crisps, the Leicester-based empire of salty snacks, began more by luck than judgement.

Once upon a time, in the late 19th century, Victorian butcher Henry Walker bought a small shop in Leicester’s High Street.

The success of his business producing pork pies and sausages led Walker to search for bigger premises. He found them in Cheapside, near Leicester market. He bought the shop in 1912.

The world-famous Walkers crisp was born in 1948, when post-war meat rationing left Henry feeling the pinch.

Walker had a choice – either branch out or go bust. He was going to make ice-cream, but decided he didn’t have enough room in his fridges.

Instead, he made crisps, peeled and chopped by hand and cooked in beef dripping in a rusty old frier.

Walkers crisps were born.
It’s not hard making crisps, according to site manager Simon Devaney. It’s just one ingredient, after all. It’s not like creating some fancy, five-tiered cake.

What is hard is making the perfect crisp – and then making it again and again, perfect crisps, every day, every week, all the time.

That’s the key, says Simon, who has worked here for 13 years. Excellence and consistency. And this, he reckons, is where Walkers excels.

That’s it. There is nothing more to it than that. It is just as you might expect.
What is impressive, though, is not necessarily what they do – but they way they do it, the size of the operation and how quickly a lorry full of potatoes are turned into crisps.

It takes just 20 minutes to make a bag of Walkers. They do it all – washing, scrubbing, slicing, frying, flavouring and bagging – in little more time than it would take you to nip to the shops, buy a bag and eat them.

This is the essence of Walkers, says Simon. Speed. Keeping the ingredients fresh.

We’re about to go on a tour, but first Simon wants to relieve me of everything I own.

No car keys. No phone. No watch. No wedding ring. No change. No glass, no plastic, no slightly-chewed Bic pen with removable parts.

I give Simon all of that. He gives me a hi-vis jacket and an Ena Sharples hair net. Men with beards have to wear beard nets, too. You can just imagine how dandy that looks. All this just in case I temporarily lose my marbles, presumably, and start throwing 5p pieces or bits of Biro into the crisps. “Can’t have that,” says Simon.

The Lady Rosetta is the queen of potatoes

Huge truck loads of potatoes arrive almost constantly at the Beaumont Leys site. Forty tonnes of potatoes, from one of 150 approved potato farms across the UK, are used here every hour. This is where the process begins.

“If you imagine the floor area of the Leicester Tigers stadium, and imagine that entire area covered with a carpet of potatoes – that’s how many we get through every single hour,” says Simon.

“It doesn’t mash, it doesn’t boil or roast very well – it’s not a versatile potato – but chip it and fry it and it’s the best potato there is,” says Simon.

It’s not an accident that the Lady Rosetta is the finest potato for making crisps. It’s been developed that way, says Simon.

“We’ve researched its cell structure, its water content. It’s all been very carefully and purposefully developed.”

Little is left to chance in the construction of the nation’s favourite crisp. Farmers growing potatoes destined for the Walkers factory have a new app on their phones which can measure exactly how much moisture is in the ground, informing the farmer not only if the potatoes need watering, but also precisely how much water they need.

This is the appliance of crisp-making science, from the field to the bag.

'This is, surely, the worst job in the building'

The potatoes are placed into a giant drum and washed and scrubbed. No chemicals are used. Just water. The inside of the drum is lined with sandpaper. The process lasts for 45 seconds. The potatoes flip around the drum and roll out on to a conveyor belt. Some, you can’t help but notice, seem better scrubbed than others.

That doesn’t matter, says Simon. “We want only the very top layer to come off,” he says, “because most of the goodness in the potato is right under the skin.”

Spuds that don’t come up to scratch – potatoes that are too small, too bruised, covered in black eyes – are picked out by CCTV cameras, somehow re-routed from the conveyor belt and binned. It’s less than one per cent, says Simon.

The potatoes are about to be sliced. Just one man – sitting down, wearing gloves, overalls and a hairnet – stands in their way. It’s his job to check that no imperfect potatoes have managed to evade the CCTV cameras and slip through the net.

He is the last in line. He looks, unsurprisingly, utterly bored. This is, surely, the worst job in the building: one man, and a conveyor belt of potatoes that never stops.

The poor chap must dream of potatoes, moving potatoes, rows and rows of them, every night.

Don’t worry, says Simon. “He gets regular breaks – and, thankfully, he doesn’t do it all day long.”

This process, the cutting of the potatoes, never stops. The steel blades are replaced every 90 minutes.

It doesn’t sound long, says Simon. But they get through a lot of potatoes in an hour-and-a-half.

“We could perhaps leave them a bit longer – but that might compromise the quality of the slice,” he says. And you don’t want that, he adds.

We’re on the line where the Extra Crunchy range are made, so these potatoes are cut into exact 1.40mm slices.

“We like the crisps here to be a little bit thicker,” says Simon.

Sunseed oil is the king of oils

Slices of freshly-cut potato fall from the drum-sized slicers – flat, 1.4mm thick, perfectly formed – fall on to another conveyor belt and into a huge vat of boiling oil.

Sunseed oil, if you want to be exact. They’ve been doing all kinds of complicated scientific experiments to find an oil that is lower in [PP: saturated] fat but doesn’t compromise crunch or taste.

According to a FAQ on the Walkers website, the company currently fries its crisps in a blend of Sunseed oil (a proprietary type of high oleic sunflower oil) and rapeseed oil. This blend is 75% lower in saturates than traditional cooking oils

After years of research, sunseed oil was found to be the best oil. It fries the potatoes perfectly, but it’s 80 per cent lower in saturated fat. The crisps enter a huge, covered vat of sunseed oil. They go in on the left and come out on the right, after a quick 10-minute dip into a bath of oil heated to precisely 170 degrees centigrade.

The oil is constantly renewed and changed every eight hours.

The Extra Crunchy crisp is fried for nearly 10 minutes; your standard crisp gets just three minutes. They come out of the frier a golden shade of light brown: perfectly cooked, still warm. This section of the factory smells glorious.

The crisps go on to another conveyor belt. They are a foot deep, winding their way towards a huge revolving drum where they are salted and flavoured.

Simon digs into this never-ending river of just-cooked crisps and spreads out a good handful on a tray. They are hot. They have just been cooked.

Would we like one? They disappear in seconds. They are magnificent!