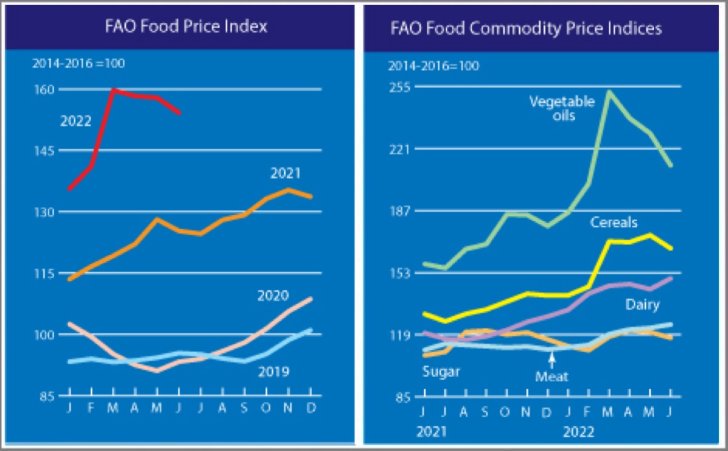 The drop in June reflected declines in the international prices of vegetable oils, cereals and sugar, while dairy and meat prices increased.

The FAO Cereal Price Index averaged 166.3 points in June, down 7.2 points (4.1 percent) from May, but still 36.0 points (27.6 percent) above its June 2021 value. After reaching a near-record level in May, international wheat prices fell by 5.7 percent in June, but still up 48.5 percent from their values last year.

The decline in June was driven by seasonal availability from new harvests in the northern hemisphere, improved crop conditions in some major producers, including Canada, higher production prospects in the Russian Federation, and slower global import demand.

International coarse grain prices fell by 4.1 percent in June, but were still 18.4 percent above their year-earlier values.

Downward pressure stemming from seasonal availabilities in Argentina and Brazil, where maize harvests progressed quickly, and improved crop conditions in the United States of America underpinned a 3.5-percent decline in world maize prices in June. Concerns over demand prospects amidst signs of an economic slowdown added to the downward pressure.

Among other coarse grains, sorghum and barley prices fell in June by 4.1 percent and 6.1 percent, respectively, in tandem with lower maize and wheat quotations.

In the meantime, world sunflower and soyoil price quotations also declined, tied to subdued global import demand in the wake of rising costs observed in recent months. In the case of rapeseed oil, besides demand rationing, international prices weakened on the imminent arrival of new crop supplies.

Quotations for cheese rose the most, underpinned by a surge in import demand for spot supplies amid market concerns over supply availabilities later in the year, as the early summer heat wave further weighed on already low milk output in Europe.

International butter prices rebounded as market uncertainty over milk deliveries in the months ahead bolstered foreign purchases as well as internal demand in Europe.

World prices across all meat types increased, with poultry quotations rising sharply, reaching an all-time high, underpinned by the continued tight global supply conditions impacted by the war in Ukraine and the Avian Influenza outbreaks in the Northern Hemisphere.

Bovine meat prices edged up, as China lifted its import restrictions for purchases from Brazil.

The FAO Sugar Price Index averaged 117.3 points in June, down 3.1 points (2.6 percent) from May, marking the second consecutive monthly decline and reaching its lowest level since February.

The slowdown in the global economic growth weighed on international sugar demand and price quotations in June.

On the supply side, good global availability prospects continued to exert downward pressure on prices.

The weakening of the Brazilian real against the US dollar and lower ethanol prices in Brazil prompted producers to step up sugar production, contributing to higher supplies and lower world sugar prices in June.

Food and Agriculture Organization of the United Nations (FAO)
Местонахождение