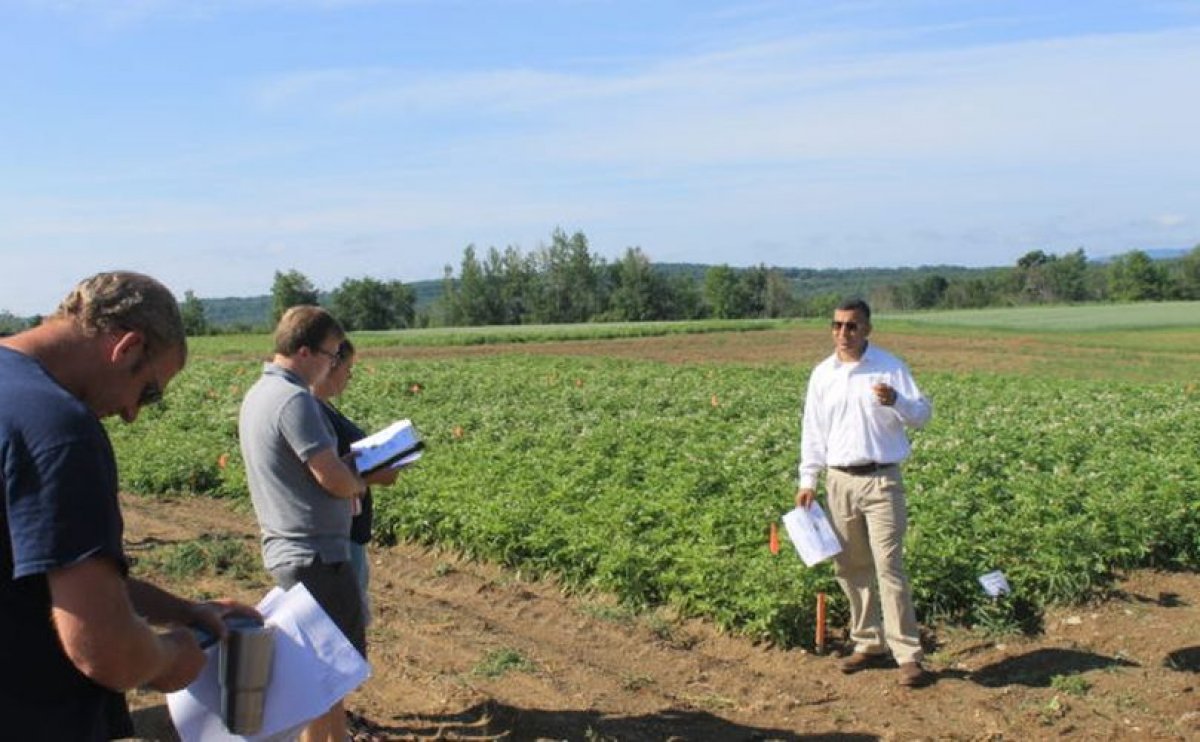 Farmers, researchers and members of the public gathered at the University of Maine’s Aroostook Research Farm in Presque Isle last Wednesday to learn about the latest in potato research.

“There’s a tremendous number of experiments going on.”

The 425-acre Aroostook Research Farm is the largest of the University of Maine’s five agricultural experiment stations. Extension researchers and farm staff work on potato variety development with a focus on disease and pest resistance, sustainable management of potato diseases and pests, crop rotation and other issues related to growing potatoes.

The more than 40 attendees at the field day learned about a range of trials underway at the farm, including research into different fertilizer applications, fungicide treatments for late blight, beneficial soil fungi, and the relatively new potato pathogen known as dickeya, which has created problems for Aroostook County’s seed potato industry.

Porter is one of the few potato breeders on the East Coast and stays busy managing thousands of experimental potato plants in greenhouses and fields.

Grown from crosses between promising disease-resistant potatoes and established varieties, most of the plants are not named and will never be grown again. Those with commercial potential will be grown for several years under different conditions and in different places.

“It takes about 12-14 years to develop a new potato variety. Each variety has to do many things wells.”

In one field at the research farm, there are 40 of the “most advanced” russet varieties from the farm’s breeding program being compared to five standard russet varieties commonly grown today.

“These have been tested in fields in northern Maine for six years. Maybe one or two of those will go into commercialization.”

A major focus of the breeding program is developing varieties that are resistant or ideally immune to the potato virus Y, or PVY, a pathogen virus that stunts potato growth and impacts multiple generations of seed potatoes.

“PVY is a huge problem for our industry. We are working really hard to breed for resistance to potato virus Y.”

The research farm has several sources of PVY-resistant potato varieties that are being incorporated into breeding. With new laboratory equipment, they’re also able to assess a breeding variety’s PVY-resistance early on in the variety’s development, Porter said.

In recent years, the breeding program has released several varieties, including the Caribou Russet, which is gaining in popularity with commercial processing growers, and the Pinto Gold, a yellow-flesh gourmet potato.

Currently, visitors to the Aroostook Research Farm see mostly fields of green potato plants and rotation crops such as barley and ryegrass. Porter and others are most interested in seeing those plants’ tubers, growing underneath the soil, after they are dug at harvest.

The Aroostook Research Farm will be displaying the tubers from some of those many potential varieties for the public to see on September 12, near the University of Maine Presque Isle’s athletic fields, Porter said.
来源
The County
想通过邮箱接收更多新闻？一起来订阅吧！
相关企业