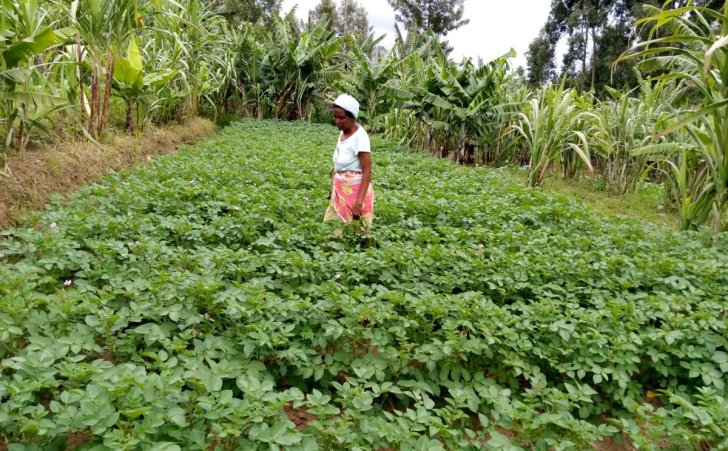 More than 3,000 small-holder potatoes farmers from Nakuru are set to benefit from a KES 127 million (USD 1 million) program aimed at enhancing potato production in the County.

The programme, being implemented under the National Agricultural Rural Inclusive and Growth Project (NARIGP) by the Ministry of Agriculture will incorporate promoting mechanized farming of the crop, development of high-quality planting material and establishment of a cold storage facility.

The County NARIGP Coordinator Peter Githunguri said the Ministry was working with potatoes farmers from the largest potato producing Sub-Counties of Molo, Njoro, Kuresoi North, Gilgil and Kuresoi South to ensure improved production of the crop both for local demand and export markets.

Githunguri said the earmarked mechanized farming was the best way to overcome post-harvest losses, as it saves time and money with the machines, set to do all the work including ploughing, planting, applying fertilizer and harvesting, making work more profitable and easier for the farmers.

The Coordinator added that the project would also entail promoting of new farming technologies for breeding multiple disease-free and high yielding seed, as a way of unlocking the over KES 15 billion (about USD 126 million)potential of potato farming in the County.

However, he lamented that scarcity of certified potato seeds in Kenya had stagnated production of the crop at seven tons per hectare, as opposed to a potential of 40 tons per hectare.

Saying that Kenya’s potato seed demand stands at 30,000 tons annually, Githunguri said it was unfortunate that the country only produces 6,700 tons, with most farmers recycling crops from the previous season to use as seed, a move he blamed for the perennial shortage that has been afflicting the country.

"Only one per cent of potato farmers in the country use certified seeds, with the rest using recycled seeds leading to low production of the crop."

On preparation of planting material, the County NARIGP coordinator pointed out that the farmers in the targeted Sub-Counties have been trained to work with precision, from seed selection to planting and harvesting to guarantee quality potato yield and also ensure they meet international standards, with the seed potatoes being inspected by Kenya Plant Health Inspectorate Service (Kephis) from planting, growing and storage before distribution to farmers.

Githunguri further explained that the initiative had adopted intensive mechanization to cut down on human and animal traffic, by setting selected farms as quarantine seed multiplication areas and by so doing, incidences of getting germs that contaminate seeds are minimized.

An official from Agriculture Council of Kenya (ACOK), George Nyamu, said the country grapples with an estimated potato seed gap of 23,000 tons per annum, with the country producing below two percent of the recommended seed, which leads to the country relying on countries like Tanzania to meet the Irish potatoes demand, as the current variety that farmers grow does not meet the required quality for making food such as French fries.

Nyamu also indicated that potato farmers in the county lose up to 40 percent of their total produce in post-harvest losses, adding that construction of a modern cold room store at Muchorwe within Molo Sub-County would cushion the farmers against post-harvest losses and eliminate exploitation by brokers.

"Our analysis indicates that potato prices increase three times in two to three months after harvesting. With the cold storage facility in place, farmers will be able to wait for the right time when prices stabilize, before disposing of their produce."

The official advised that proper storage would prolong the shelf life of the harvest by four to six months and also maintain consistency in quality, enabling farmers to bulk the commodity and improve their bargaining power for better prices.

In Nakuru, there are about 20,000 farmers growing potatoes on more than 38,000 acres of land, with a total production of 160,000 tonnes of assorted varieties being grown, with shangi variety being the dominant.

According to KEPHIS, potato crop is very crucial towards attaining food security as Irish potato (Solanum tuberosum) is the second most important food crop in Kenya, after maize. It is grown by about 800,000 smallholder farmers across the country.

Kenya Plant Health Inspectorate Service (KEPHIS) is the government parastatal whose responsibility is to assure the quality of agricultural inputs and produce to prevent adverse impact on the economy, the environment and human health.