Potato Growers in Rwanda will benefit from new distribution system 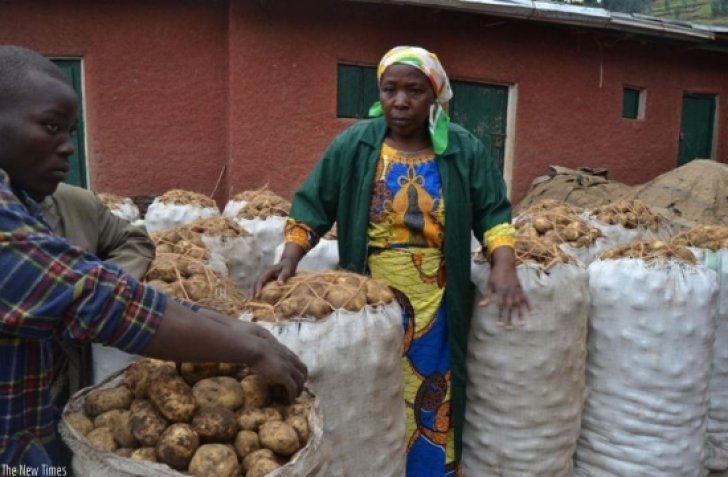 For many years, Marie Therese Uzamukunda was always frustrated by price fluctuations for Irish potatoes, and she says she incurred losses every year, especially during the bumper season.

“For generations, our soil has been suitable for potatoes more than any other crop, and this is the crop we exclusively grow. But since I started growing potatoes on a large scale, profits were not consistent and not because of poor yields, but because of an unstructured distribution system,” says Uzamukunda, who lives in Nyabihu District.

Uzamukunda, like other farmers, in the north-western part of the country, have found it hard to maintain a steady income from their produce because the prices were determined not by them as producers, but by middlemen.

“Our pleas remained unheeded for long; the price was fixed without the involvement of farmers,” says Issac Nzabarinda another farmer and the president of FECOPPORWA, a cooperative that brings together Irish Potato farmers countrywide.

Farmers say there are times they lack buyers due to bumper harvest and the fact that there were many traders between the farmer and the final consumer.

Irish potatoes are mostly grown in four districts; Musanze and Burera in the Northern Province and Nyabihu and Rubavu districts in the Western Province covering 80 per cent of total production countrywide.

Hope for the future

As part of the solution, the Ministry of Trade and Industry, and the Private Sector Federation have entered agreement with the farmers’ cooperative to modernise the entire value and supply chain for maximum profit.

This includes establishing collection centres in various parts of the country where the crop is grown and to set up a new wholesale market in the capital Kigali which will be managed by Regional Potatoes Trading Ltd (RPT).

The company is comprised of members of Private Sector Federation (PSF).

The potatoes will be collected and taken to the collection centres which will be managed by people contracted by farmers themselves and from the centres, business people will buy them and either take them to the wholesale market in Kigali, or any other market.

The price will be fixed through consensus by all parties along the chain.

According to the Minister for Trade and Industry Francois Kanimba, the move is to ensure farmers are the prime beneficiaries.

While farmers say the investment per kilogramme stands at Rwf120 upon harvest, officials said the minimum they should get should be 20 per cent above what they invested.

Kanimba said, however, that the move also aims at helping other parties like consumers while traders will also benefit because of a better structured distribution chain.

The new programme will start this week and Kanimba maintains that the ministry will keep working with all the parts involved to ensure all the problems are addressed.

Already, 126 collection centres have been established countrywide and, currently, works to put up the required infrastructure and selection of committees to manage them are ongoing.

The ministry will also establish a regulatory framework for the new trading system so that it binds all parties, according to Kanimba.

Farmers and members of PSF have expressed commitment to work together to ensure the system is successful and beneficial to all parties.

A kilo of potatoes will be bought from the farm not below Rwf132 in Burera District, Rwf128 in Musanze, Rwf131.9 in Nyabihu and Rwf132.1 in Rubavu District.

For traders who get them from collection centers to Kigali, they will be required to pay Rwf141.7 per kg in Burera, Rwf137 per kg in Musanze, Rwf140.7 in Nyabihu and Rwf142.1 per Kg in Rubavu.

“This system will benefit us a lot, we suffered huge losses previously. But now we are certain to make profits and this will certainly increase and will encourage us to work hard and continue proffessionalising our farming,” said Nzabarinda.
Source
The New Times (Rwanda)
Like to receive news like this by email? Join and Subscribe!
Related Topics
Potato Supply chainPotato CultivationPotato Prices