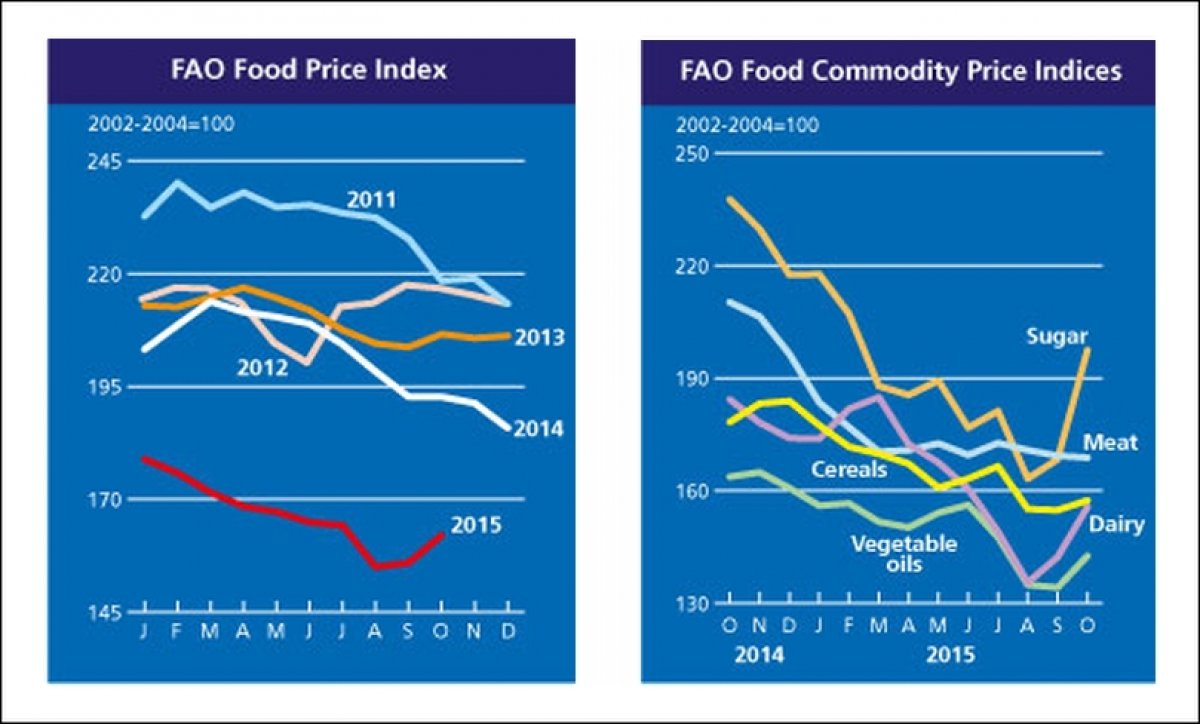 After mostly declines since March 2014, the FAO Food Price Index went up sharply in October 2015

The FAO Food Price Index averaged nearly 162 points in October 2015, as much as 6 points (3.9 percent) more than in September and the sharpest increase since July 2012. The October surge was mainly the result of rises in the sugar, vegetable oils and dairy quotations, while cereal prices were subject to a more modest increase and those of meat remained stable. According to the index, food on international markets in October was still 16 percent cheaper than one year ago.

The >FAO Cereal Price Index averaged 157.4 points in October, up 2.6 points (1.7 percent) from September, largely led by an upturn in wheat and maize prices. Wheat quotations were higher, mostly on concerns about dryness affecting winter wheat in some countries and deteriorating production prospects in Australia. Maize prices strengthened, largely reflecting a slowdown in farmers’ sales in the United States, the world’s biggest producer and exporter of maize. By contrast, rice prices fell, as a result of marked declines in the fragrant and Japonica rice segments.

The FAO Vegetable Oil Price Index averaged 142.6 points in October, up 8.4 points (or 6.2 percent) from September. The increase, which follows three months of decline, was primarily driven by higher palm oil prices, as concerns intensified about El Niño compromising next year’s production in Southeast Asia – in Indonesia in particular. In addition, international soy oil prices strengthened, mainly reflecting slow progress in soybean plantings in parts of Brazil due to unfavourable weather conditions. Limited global availabilities of rape and sunflower seed also lent support to the index.

The FAO Dairy Price Index averaged 155.6 points in October, up 13.4 points (9.4 percent) from September. Concerns that milk output in New Zealand would fall during the current June/May dairy year caused Oceania prices to rise in both September and October, with export prices from the EU following suite – although remaining below quotations in Oceania. Prices of whole milk powder surged by almost 21 percent over the month, with all the other dairy products also incurring marked increases.

The FAO Meat Price Index averaged 168.8 points in October, essentially the same level as in September, prolonging an extended period of overall stability that has been evident since March 2015. Of the meats covered, only ovine meat registered a substantial change, rising by 8 percent – due to constrained export availability in Oceania; prices of the other categories of meat were little changed.