During a major quarantine survey on Norfolk Island, a small island in between New Zealand and Australia, both the tomato-potato psyllid (Bactericera cockerelli) as well as the zebra chip causing bacterium Ca. Liberibacter solanacearum (Lso) have been detected.

The discovery of sap-sucking insects previously not present on Norfolk Island has given scientists a head-start on controlling a major biosecurity threat to Australia.

In 2014 the Australian and Norfolk Island governments coordinated a major quarantine survey. During the survey, insect traps were set by Dr Andrew Geering and Dr John Thomas, Plant Biosecurity CRC researchers from the Queensland Alliance for Agriculture and Food Innovation (QAAFI). The tomato-potato psyllid (Bactericera cockerelli) was recognised in trap contents by Federal Government entomology colleagues.

“It transmits a serious disease known as Zebra chip caused by the bacterium Ca. Liberibacter solanacearum (Lso), which we have also found in these crops on Norfolk Island. The insect and the disease would be major threats to Australian growers if they arrived on the mainland."

"There are strict quarantine measures in place for movement of goods between Norfolk Island and Australia.”

The psyllid probably came from New Zealand, arriving on illegally imported plant material or in cargo. The psyllid and bacterium are widely spread at varying densities across the island with no likelihood of eradication possible with the available resources. Biological control options for the psyllid are however being considered by the Norfolk Island Government to reduce population levels. 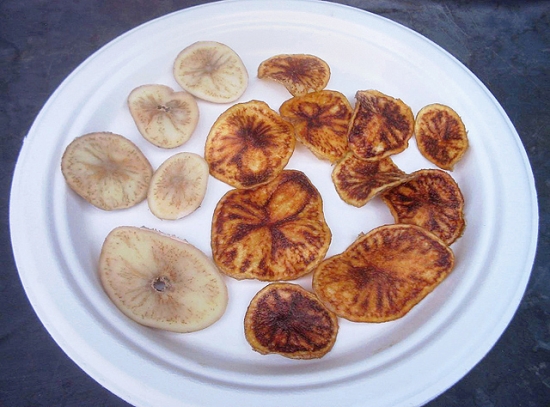 In new research following the survey, the Plant Biosecurity CRC research team is working to confirm how the psyllid reached Norfolk Island and determine which weeds and native plants act as hosts to the pest and the disease.

“While it’s a worrying incursion, it does give us a chance to identify the best management strategies for this pest in a sub-tropical environment,” Dr Geering said.

“Initial observations are that the disease situation in the colder climate of New Zealand is slightly different to that on Norfolk Island.

“The disease epidemiology on Norfolk Island is much more like that which could occur in Queensland. Understanding the hosts and spread of the psyllid will give us a real advantage in preparing for any possible Australian incursion.”

Lso was detected in New Zealand in 2006 and by 2012 the psyllid and Lso were estimated to have cost potato growers alone more than $200 million in damaged crops. The disease causes ‘zebra chip’ in potatoes, a brown discolouration that intensifies when the potato is fried, as well as stunting growth and stopping the production of fruit in tomato crops.

University of Queensland (UQ)
Where