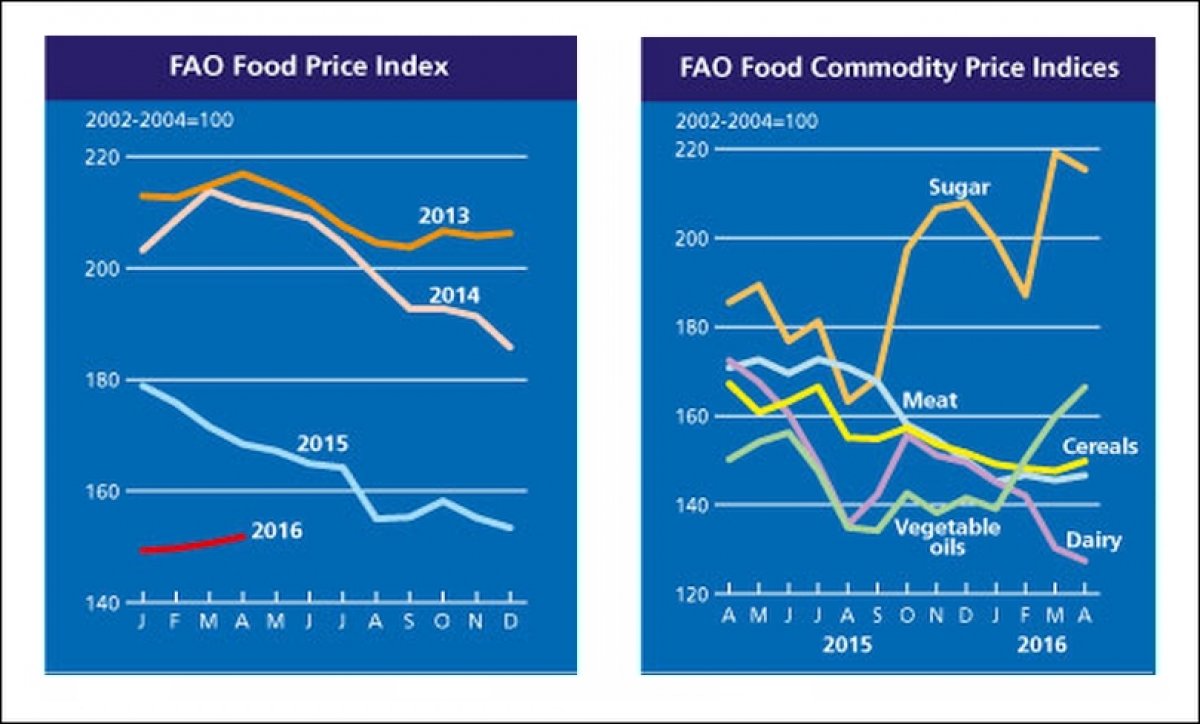 The FAO Food Price Index (FFPI) averaged 151.8 points in April 2016, up 1.1 points (0.7 percent) from March, but almost 10 percent below its April 2015 level. The small increase in April represented a third month of gradual rise in the value of the FFPI.

The FAO Food Price Index (FFPI) averaged 151.8 points in April 2016, up 1.1 points (0.7 percent) from March, but almost 10 percent below its April 2015 level. A relatively strong rise in vegetable oil quotations coupled with a more modest gain in international prices of cereals more than offset a decline in dairy and sugar prices. The small increase in April represented a third month of gradual rise in the value of the FFPI.

The FAO Cereal Price Index averaged nearly 150 points in April, up 2.2 points (1.5 percent) from March, but still down 10.4 percent year-on-year. Maize quotations increased the most, influenced by weaker US dollar and spill over from soaring prices in the vegetable oils complex. However, favourable weather conditions and expected large supplies in the new season limited gains in wheat markets. On the other hand, rice prices were marginally down, under the pressure of falling Japonica quotations, which outweighed modest increases in the Indica and Aromatic rice segments.

The FAO Vegetable Oil Price Index averaged 166.4 points in April, up 6.6 points (4.1 percent) from March and representing the third consecutive monthly increase. The April rise was again driven by palm oil, the prices of which climbed to a 17 month high on concerns over a grim 2016 production outlook and a growing world demand. International prices of soy oil, the oil with the second-highest weight in the index, also firmed due to less favourable 2015/16 production prospects in South America.

The FAO Dairy Price Index averaged 127.4 points in April, down 2.9 points (2.2 percent) from March. Quotations for dairy products continued to be affected by ample world supplies and limited buying interest by traditional importers. As in the previous month, while prices for all dairy products fell, those of butter and cheese were the most affected, reflecting a build-up of stocks in the major exporting countries. World prices for Skimmed Milk Powder (SMP) have remained close to the EU intervention price, sustained by intervention purchases which have made stocks in the EU surge compared to April last year, a factor which has also lent a degree of stability to Whole Milk Powder (WMP) quotations.

The FAO Meat Price Index averaged 146.6 points in April, up 1.2 points (0.8 percent) from March. The prices of pig and poultry meats were mostly steady, reflecting an overall balanced supply and demand situation. While they moved higher for sheep meat, the main notable change concerned the rise in bovine meat quotations, where restricted supplies and an up-tick in demand from the United States pushed up Australia’s average monthly export prices to their highest level since October 2015.

The FAO Sugar Price Index averaged 215 points in April, down 3.8 points (1.7 percent) from March. Last month’s decline reflected generally large export availabilities in Brazil, supported by a bumper crop (second highest on record) and expectation of reduced use of sugarcane for the production of ethanol in the country. However, the possibility of global sugar production falling short of the anticipated consumption for the second consecutive season limited the decline in international prices.
Source
Food and Agriculture Organisation of the United Nations
Related Companies
Food and Agriculture Organization of the United Nations (FAO)