FAO Food Price Index continues to firm in May 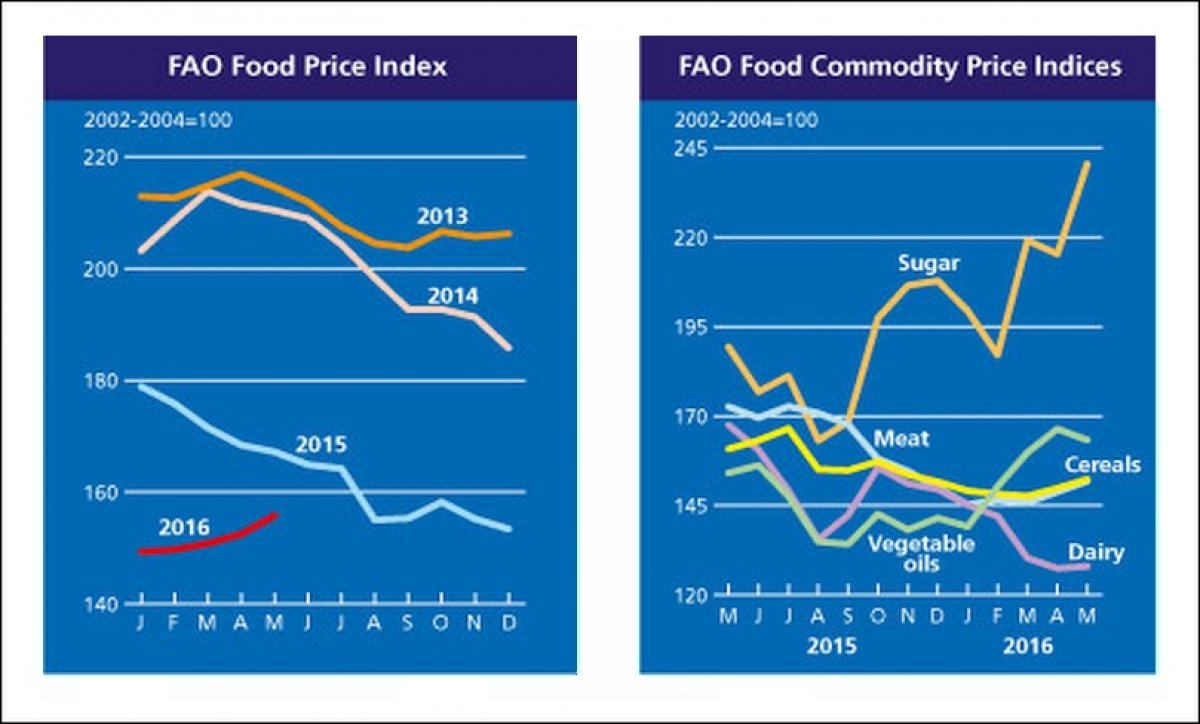 The FAO Food Price Index (FFPI) averaged 155.8 points in May 2016, 3.2 points (2.1 percent) higher than in April, but still 7 percent below the corresponding period last year. The May increase marked the fourth consecutive month of rise in the value of the FFPI.

The values of all sub-indices moved up in May except for the vegetable oils, which dropped for the first time in four months. Sugar prices surged while meat, cereals and dairy registered some increase.

The FAO Cereal Price Index averaged 152.3 points in May, up 2.5 points (1.6 percent) from April but down 5.3 percent from May 2015. Among the major cereals, maize prices increased sharply for the second consecutive month, mainly on tight export supplies until the harvesting of new crops in the northern hemisphere later this year.

The FAO Vegetable Oil Price Index averaged 163.3 points in May, down 3.1 points (1.8 percent) from April. The decline was mainly caused by palm oil, the price of which fell after three months of sharp gains.

Weaker than anticipated import demand for palm oil, notably in China, India and the EU, combined with growing export availabilities in Malaysia have weighed on palm oil international quotations, despite negative prospects for global production.

The FAO Meat Price Index averaged 151.8 points in May, some 3.0 points (2.0 percent) higher than in April. Prices of all categories of meat rose, particularly those of pigmeat and ovine meat, while smaller increases were registered for bovine and poultry meat. Pigmeat quotations from the EU moved up strongly, due to gains in internal prices and continued brisk import demand from Asia.

The FAO Sugar Price Index averaged 240.4 points in May, up as much as 25.1 points (11.7 percent) from April. The sharp rebound in May sugar prices was driven mostly by deteriorating production prospects in India, the world’s second largest sugar producer, as well as lower output in China which raised the expectation of tighter domestic supplies and, hence, higher imports by the country.