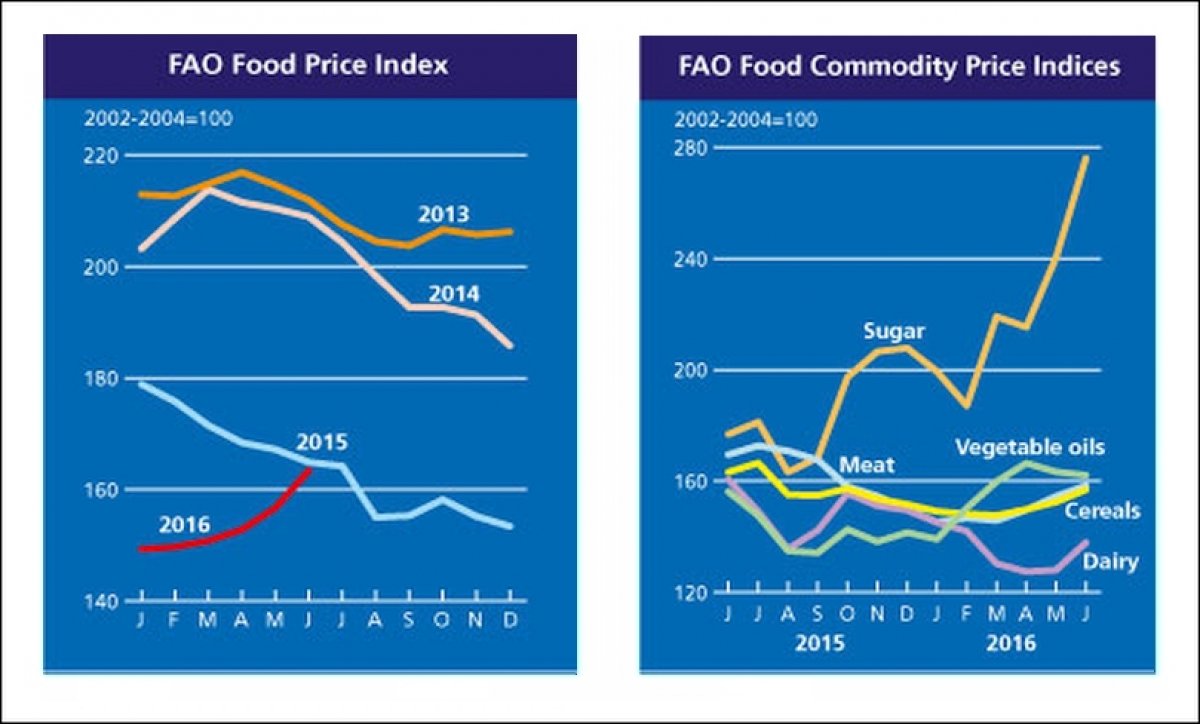 The FAO Food Price Index (FFPI) averaged 163.4 points in June 2016, 6.6 points (4.2 percent) higher than in May. Not only did the June increase mark the fifth consecutive monthly rise, but it also represented the largest monthly increase witnessed over the past four years.

The FAO Food Price Index (FFPI) averaged 163.4 points in June 2016, 6.6 points (4.2 percent) higher than in May and one percent below the corresponding month last year. Not only did the June increase mark the fifth consecutive monthly rise in the value of the FFPI, but it also represented the largest monthly increase witnessed over the past four years. Except for vegetable oils, the values of all the commodity sub-indices moved up in June, led by a surge in the price of sugar and more moderate increases for cereals, dairy and meat.

The FAO Cereal Price Index averaged 156.9 points in June, up 4.4 points (2.9 percent) from May, but still 3.9 percent below the June 2015 level. Nearly all of last month’s increase was caused by a strengthening of maize prices; primarily because of tightening spot export supplies in Brazil. Wheat values rose during the first half of the month, before reversing course subsequently on reports of record yields in the United States and better than expected harvests in the Black Sea region. International rice prices varied little from May levels, as upward pressure exerted by generally tight export availabilities was countered by subdued buying interest.

The FAO Vegetable Oil Price Index averaged 162.1 points in June, down 1.3 points (0.8 percent) from May, primarily reflecting lower quotations of palm oil, due to subdued global import demand and a seasonal recovery in production in Indonesia and Malaysia. Prospects of ample sunflower and rapeseed oil supplies also weighed on the index. By contrast, soy oil prices increased, underpinned by reduced export availabilities in South America and less favourable than initially anticipated production prospects for 2016/17.

The FAO Dairy Price Index averaged 137.9 points in June, up 9.9 points (7.8 percent) from May. Average monthly prices for all the dairy commodities that compose the Index rose. An uncertain outlook for the 2016/17 milk year in Oceania and a slowdown of monthly milk production growth in the EU in April caused quotations to strengthen. Despite the magnitude of the increase, the June rise only represented a recovery from the low prices prevailing in the preceding three months. Compared to June last year, the Dairy Price Index was down 23 points, or 14 percent.

The FAO Meat Price Index averaged 158.3 points in June, 3.8 points (2.4 percent) higher than its revised May value. For the third consecutive month, average quotations strengthened for all categories of meat, particularly those of pigmeat and ovine meat, while smaller increases were registered for bovine and poultry meat. In the EU, a shortage of pigs for slaughter and lighter slaughter weights constrained supply and caused export quotations to move up strongly. Similarly, reduced export supplies boosted quotations of sheep meat and bovine meat in Oceania. Poultry meat prices have exhibited a moderate but steady increase for the year so far, rising by 10 percent since January: Brazil in particular has experienced strong growth in sales, especially to Japan and Saudi Arabia.