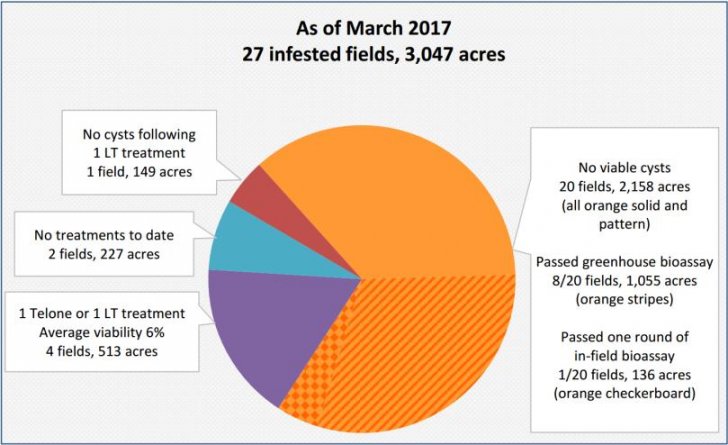 Progress is being made eradicating the microscopic potato cyst nematodes that have been threatening Idaho’s $900 million potato industry the last decade, according to the latest update by USDA-APHIS.

The U.S. Department of Agriculture said viable potato cyst nematodes can no longer be detected in three additional fields. The agency on Friday released the first quarter report for 2017 on the Pale Cyst Nematode Eradication Program that said 20 of the 27 infected fields have now reached that step in a lengthy process to return to production.

About 9,300 acres are being regulated because of the pest in southeastern Idaho. Canada, Mexico, and Korea initially banned Idaho potatoes when the pests were discovered in 2006, and Japan banned all U.S. potatoes. Japan still bans Idaho potatoes.

The report said that extensive surveys have not found the pale cyst nematode, or PCN, in Idaho beyond the 27 confirmed fields.

“The general opinion by our trading partners is that potatoes produced outside regulated areas do not pose the biological risk for introduction of PCN.”

Nematodes feed on potato roots and can reduce crop production by 80 percent, but experts say they aren’t harmful to humans. Idaho produces about 30 percent of the nation’s potato crop