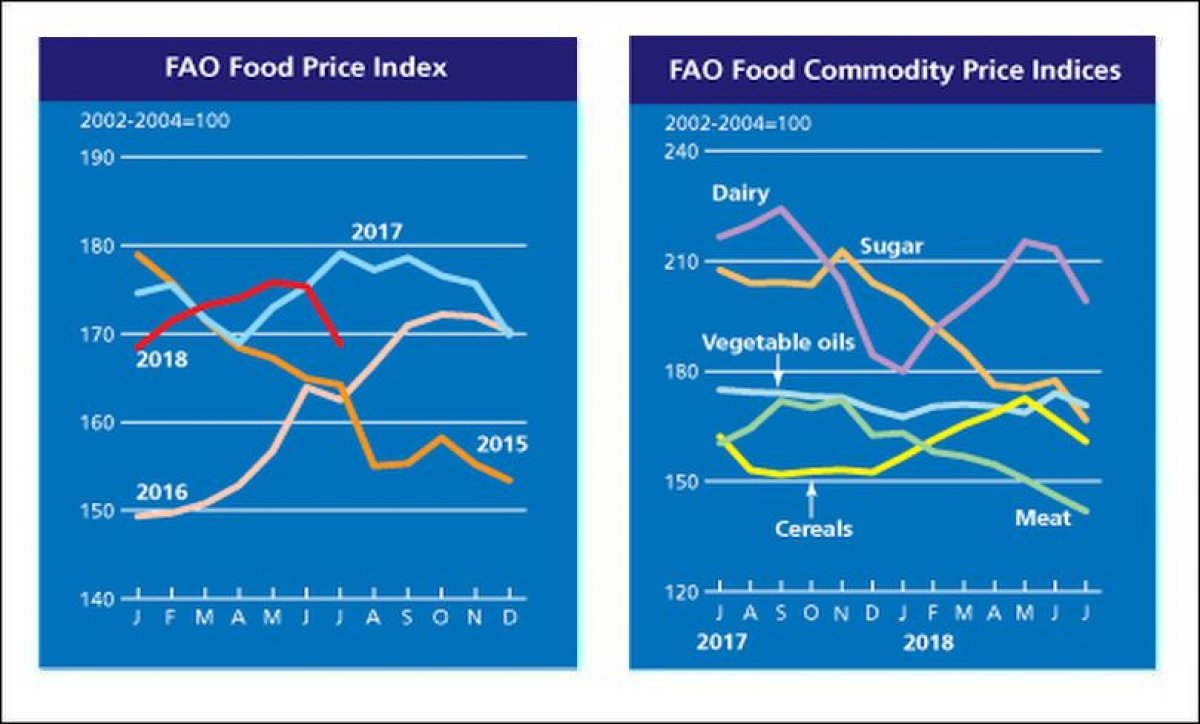 The July fall marked the first significant month-on-month decline in the value of the FFPI since December 2017, reflecting notable drops in the values of all sub-indices.

The FAO Cereal Price Index averaged 160.9 points in July, down nearly 6 points (3.6 percent) from June and also 1.3 points (0.8 percent) below its level in the corresponding period last year.

The decline in July was driven by weaker export quotations for wheat, maize and rice. International wheat prices were generally weaker during the first half of the month, but concerns over production prospects in the EU and the Russian Federation started to push export values higher towards the end of the month.

In coarse grains markets, maize prices remained under general downward pressure, largely on weak demand and good production prospects in the United States. However, similar to wheat markets, maize values made solid gains towards the end of the month, on weather worries and a faster pace in export sales. International rice prices also fell, pressured by frail demand for Indica and fragrant varieties as well as currency movements in some leading exporters.

The FAO Vegetable Oil Price Index averaged 141.9 points in July, down 4.2 points (or 2.9 percent) from June, marking a sixth consecutive fall and a two-and-a-half year low.

The latest slide mostly reflects weakening values of palm oil and soy oil. International palm oil prices fell further under the influence of sluggish export demand, ample stocks held by leading producing countries, and expectations of higher production in the coming weeks. As for soy oil, the fresh drop in prices was largely driven by spill-over weakness from the soybean market and persistently high crushing rates in the United States, supported by attractive crush margins.

On the other hand, rapeseed oil values trended upward, underpinned by improved demand from biodiesel producers and negative crop prospects in the EU.

The FAO Meat Price Index averaged 170.7 points in July, down 3.3 points (1.9 percent) from its revised value for June.

The June upward revision primarily reflects a sharp rise in bovine meat prices from Brazil, caused by a decline in exports following logistical problems due the prolonged truck drivers’ strike. In July, the Index shed few points, in part due to a gradual normalization of meat exports from Brazil.

Overall, price quotations for bovine meat fell, while those of pig and poultry meat also weakened. However, ovine meat prices increased marginally on strong import demand, especially from China and the United States.

The FAO Dairy Price Index averaged 199.1 points in July, down 14.1 points (6.6 percent) from June. At this level, the index stood at 10.7 percent above January 2018 but still 8 percent below the corresponding month a year ago.

The FAO Sugar Price Index averaged 166.7 points in July, down 10.7 points (6 percent) from June and nearly 20 percent lower than its level in the corresponding period of last year.

The sharp decline in July was largely driven by improved production prospects in the main sugar producing countries, notably India and Thailand. Expectations of lower sugar output in Brazil, the world’s largest producer and exporter, resulting from protracted drought conditions, as well as a greater use of sugarcane for the production of ethanol, limited the fall in international sugar prices.
Source
Food and Agriculture Organisation of the United Nations
Like to receive news like this by email? Subscribe!
Related Companies
Food and Agriculture Organization of the United Nations (FAO)