Farmers in Rwanda are looking for better potato storage technology 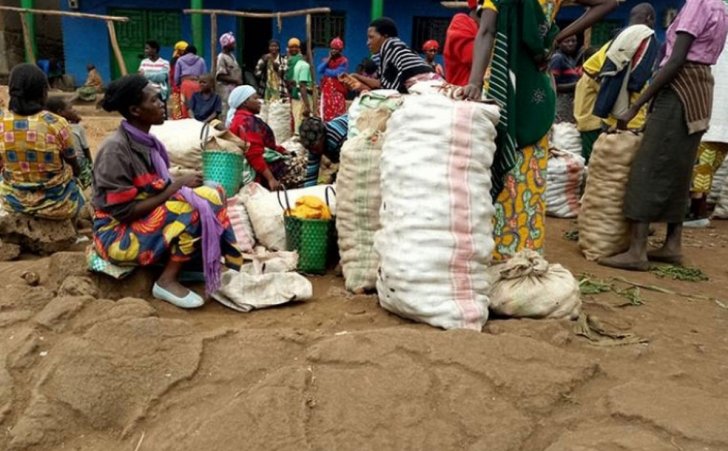 Rwanda Agricultural Board has said that it is working with agricultural experts to introduce affordable technologies that could help store potatoes for over a period of six months in a bid to fight against food insecurity and low prices affecting farmers.

Rwanda produces 916,000 tonnes of Irish potatoes every year, making the crop the third most stable for the country.

Potatoes cover 3.9 per cent of the total cultivated area.

Statistics from the National Institute of Statistics of Rwanda indicate that the per capita consumption for potatoes is 125 kilogrammes.

The Northern volcanic region accounts for more than 80 per cent of national potato production.

In this region, potato is the staple food with more than 60 per cent of the production being used directly for home consumption

However, potato farmers often sell their potato produce at giveaway prices during harvest seasons as there are no techniques to store them for long periods to be used or sold later when prices are friendly.

Lack of storage techniques also prevent them from reserving for food security in the future.

Charles Bucagu, the Deputy Director-General of Agriculture Research and Technology Transfer at Rwanda Agricultural Development Board said that technology transfer is a solution to the challenge.

He was speaking on the sidelines of a graduation ceremony that awarded certificates to farmers and processors after training on processing and preservation technologies under the support of Chinese government.

Charles Bucagu, the Deputy Director-General of Agriculture Research and Technology Transfer at Rwanda Agricultural Development Board:

“It has not been possible to store Irish potatoes for six months.”

“But there is a technology that can store them for such a long period without any damage.”

With this technology, he said, farmers could sell at good prices in the future.

“Without such affordable technology, farmers immediately sell their produce at giveaway prices.”

He said that farmers have to be trained on the technologies and form groups for easy implementation.

In partnership with private sector, the Ministry of Agriculture says the storage technologies could be scaled up.

Donathile Ndayisenga, a farmer from Musanze District said that she recently sold a tonne of potatoes this season at Rwf180 per Kilogramme.

The price in Kigali city is around Rwf300 per Kilogamme. Donathile Ndayisenga:

“When we harvest we sell the whole produce due to lack of storage technologies.”

“Yet for instance, we could store and sell later to make sure food and school fees for our children are always available.”