John Keeling honored as the Potato Man for All Seasons 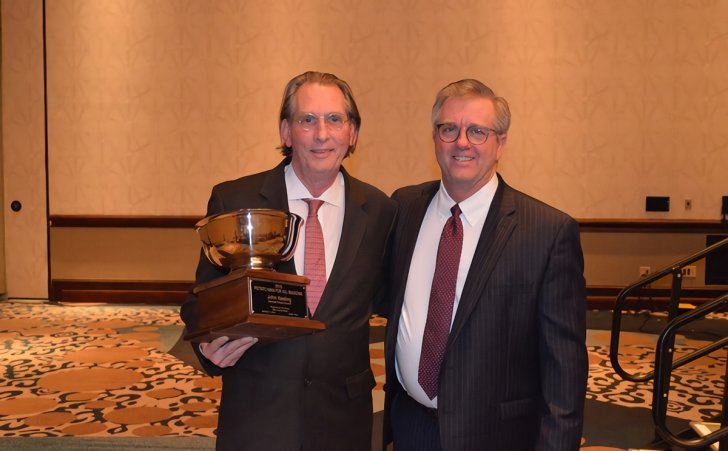 John Keeling is The Packer’s 2018 Potato Man for All Seasons.

Tom Karst, the editor of The Packer, presented the award at National Potato Council’s annual banquet on January 11.

Keeling, executive vice president and CEO of the National Potato Council and a part of the 2011 class of The Packer 25, will retire from the Washington, D.C.-based council by mid-year. The council is in the early stages of searching for a successor to Keeling.

Keeling has had a transformational impact on the potato industry since he was hired in late 2001, Karst said, leading efforts to enhance potato exports, boost the potato’s role in nutrition programs and working as a key lobbyist for specialty crop interests in the farm bill.

Drawing from comments submitted by NPC members who nominated Keeling for the award, Karst said Keeling was the leader of the group when it transitioned from Denver to Washington, D.C. in 2002.

His nearly 15 years of legislative and regulatory influence experience before coming to the National Potato Council served the industry well.

“I was already pretty proud of what the National Potato Council was doing (in 2001), but John took it to like two levels beyond that; he’s just been such a great addition to the potato industry and really got us where we needed to be.”

One nomination said Keeling’s folksy demeanor was exactly what the potato industry needed and the native Texan’s brilliant political ingenuity has changed the NPC landscape.

“John’s has been a charismatic leader for us.”

“He works well with people, he’s connected with our legislators and he just knows the right people to get the job done.”

“There’s nobody more passionate about the potato industry than John is.”

“He wants to know that the potato industry is going forward and is going to be a part of it even in his retirement.”

Accepting the award, Keeling reflected on the time he was hired in the months after 9/11 in 2001. He said the council has strived to represent the industry in Washington to speak with one voice.

“There are a lot of people in Washington who believe, and I think it’s true, that the National Potato Council punches way above their weight.”

“I think you’ll see that we will continue to do that because we’ve got great structure, we’ve got a great group of people, and we have great leaders.”

Keeling said the industry has given him and his family much more than he has given it.

“It has been a great ride, I will miss every one of you.”

Alsum Farms & Produce is a grower, packer and shipper of Wisconsin Potatoes and Onions