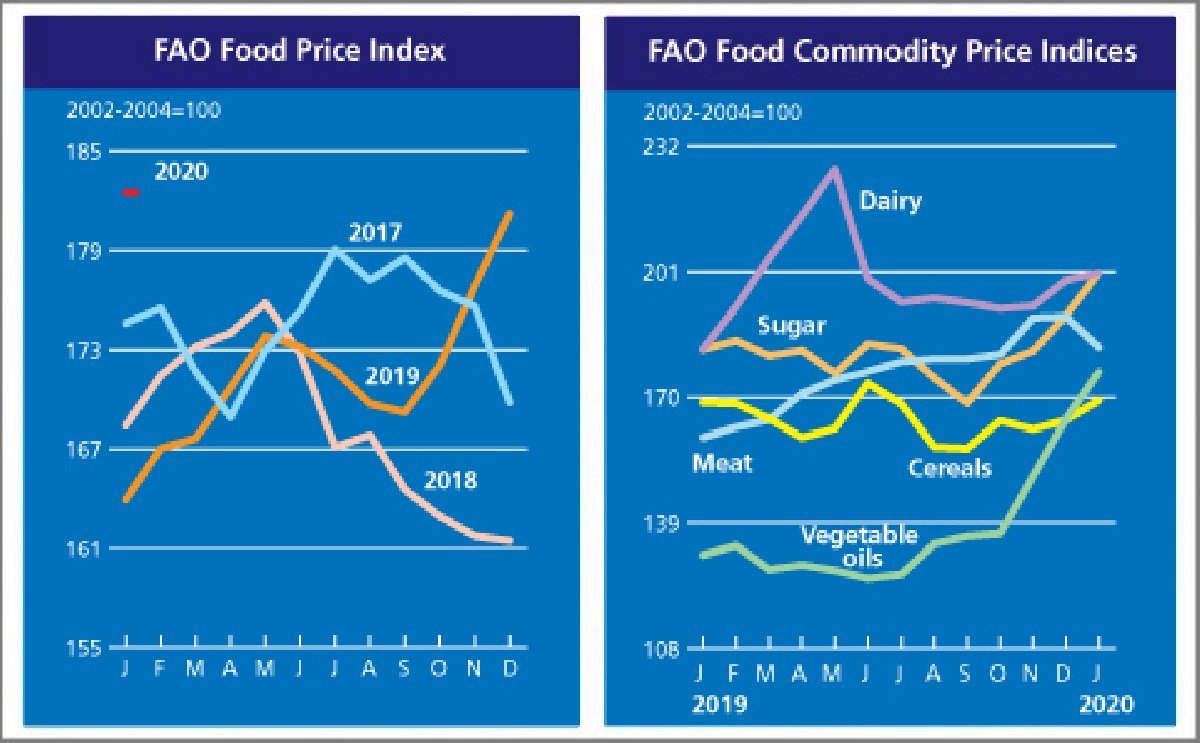 The increase in January marked the fourth consecutive month that FFPI has been on the upward trend. The latest rise is largely driven by continued strength in the prices of vegetable oils, sugar and, to a lesser extent, cereals and dairy products, more than offsetting a sharp drop in meat prices.

The FAO Cereal Price Index averaged 169.2 points in January, up 4.8 points (2.9 percent) from December and reaching its highest value since May 2018. International prices of all major cereals increased in January.

Wheat prices rose the most, supported by faster pace in purchases by several countries amid slowed shipments from France, due to port strikes, and a report of a possible introduction of an export quota by the Russian Federation until 30 June 2020 because of high domestic prices.

The FAO Vegetable Oil Price Index averaged 176.3 points in January, up 11.6 points (or 7.0 percent) from December and hitting a three-year high. International palm oil values rose for the sixth consecutive month, underpinned by prospects of tightening global supplies amid brisk demand from the biodiesel sector.

From mid-January onward, however, prices across the vegetable oil complex lost strength, largely reflecting uncertainties over the implications of the US-China trade deal and concerns about the potential impact of the global coronavirus health emergency.

In the case of palm oil, trade tensions between India and Malaysia added to the downward pressure on prices.

The FAO Dairy Price Index averaged 200.6 points in January, up nearly 1.8 points (0.9 percent) from December. At this level, the Index stands 18.5 points (10.2 percent) above its value in the corresponding month last year.

In January, price quotations for butter, cheese and skim milk powder (SMP) all rose, reflecting strong import demand, combined with limited spot availabilities in Europe as well as in Oceania.

The FAO Meat Price Index* averaged 182.5 points in January, down 7.5 points (4.0 percent) from December, marking a break from eleven months of continued increases. At this level, the Index exceeds by 22.4 points (14.0 percent) that of January last year.

Price quotations for all meat categories represented in the Index dropped in January, with those of ovine meat falling the most, followed by bovine, pig and poultry meats, pressured by reduced purchases, especially from China and the Far East after large imports towards the end of 2019.

The FAO Sugar Price Index averaged 200.7 points in January, up 10.4 points (5.5 percent) from December, marking the fourth consecutive monthly increase and the highest level since December 2017.

The latest increase was propelled by expectations of a 17 percent drop in India’s sugar output, a 66 percent production fall in Brazil’s largest producing region (the Centre-South) and a 25 percent contraction in Mexico’s harvest.

However, recent declines in crude oil prices and the continuous weakness of the Brazilian currency (Real) against the United States Dollar limited the extent of the increase in international sugar prices.