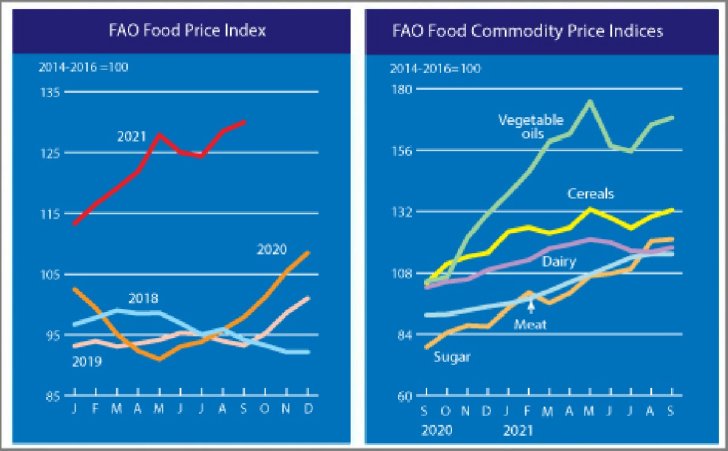 The FAO Food Price Index rose further in September.
The FAO Food Price Index (FFPI) averaged 130.0 points in September 2021, up 1.5 points (1.2 percent) from August and 32.1 points (32.8 percent) from the same month last year. The latest rise of the FFPI was largely driven by higher prices of most cereals and vegetable oils. Dairy and sugar prices were also firmer, while the meat price sub-index remained stable.

The FAO Cereal Price Index averaged 132.5 points in September, up 2.6 points (2.0 percent) from August and 28.5 points (27.3 percent) above its level of September 2020. Among the major cereals, world wheat prices increased the most in September, up almost 4 percent month-on-month and as much as 41 percent year-on-year.

International barley prices also increased in September, by 2.6 percent, mostly driven by strong demand, downgraded production prospects in the Russian Federation, and gains in other markets.

By contrast, world maize prices remained generally stable, up only 0.3 percent from August, as upward pressure from hurricane-related port disruptions in the US was countered by improved global crop prospects and the start of harvests in the US and Ukraine.

Nonetheless, maize prices remained elevated at nearly 38 percent above their levels of September 2020.

The FAO Vegetable Oil Price Index averaged 168.6 points in September, up 2.9 points (or 1.7 percent) month-on-month and about 60 percent above its year-earlier level. The increase was mainly driven by higher palm and rapeseed oil values, whereas quotations for soy and sunflower oils declined.

The FAO Dairy Price Index averaged 117.9 points in September, up 1.7 points (1.5 percent) from August and exceeding by 15.6 points (15.2 percent) its value in the corresponding month last year.

In September, international quotations for all dairy products represented in the index rose, with skim milk powder (SMP) and butter rising sharply, underpinned by solid global import demand amid limited export availabilities, especially from Europe on the back of low inventories and seasonally declining milk production.

The FAO Meat Price Index* averaged 115.5 points in September, virtually unchanged from its revised value for August and 24.1 points (26.3 percent) above its value in the corresponding month a year ago.

The FAO Sugar Price Index averaged 121.2 points in September, up 0.6 points (0.5 percent) from August and 42.2 points (53.5 percent) above the level registered in the corresponding month last year. Concerns over a reduced output in Brazil, the world's largest sugar exporter, due to prolonged dry weather conditions and frosts, continued to underpin the increase in world sugar prices.

In addition, higher ethanol prices encouraged a greater use of sugarcane for ethanol production in Brazil. However, the upward pressure on prices was limited by a slowdown in global import demand for sugar and good production prospects in key exporters, such as India and Thailand.