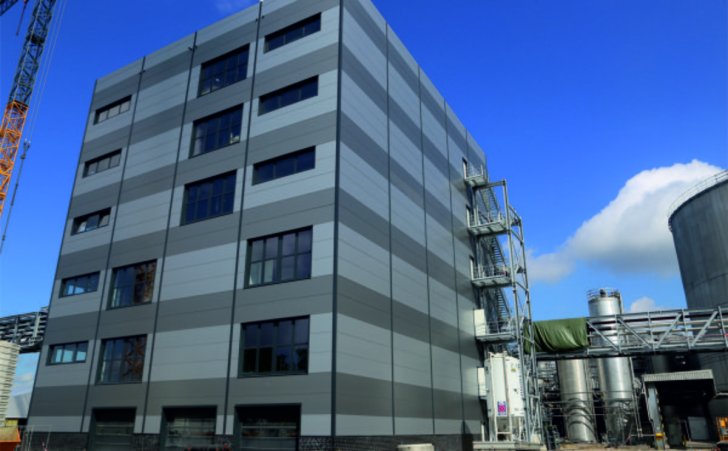 WaltrAut the facility for the production of the plant-based product

The Emsland Group has completed the construction of a 750 m2 building with a height of 33m that holds new roller drying units with autoclaves. Nicknamed "WaltrAut," the facility was designed for the production of plant-based products for the construction additive industry, such as wallpaper paste, tile adhesives, starch ethers, and environmental products.

Experts at the Emsland Group’s Innovation Center in Emlichheim research and test how ingredients made from potatoes and peas can positively affect various recipes for food, animal feed, and technical specialties industries.

With the completion of WaltrAut, once the ideal qualities in a recipe are achieved, such as the workability and stability of plaster, it can be easily transferred to the production plant and efficiently produced on a large scale for customers. An overarching goal of this project, however, was not only to meet market demand and increase efficiency but do so in a sustainable way.

"For the Emsland Group, sustainability is always a top priority, and that, of course, applied to this project as well. We took steps to ensure that not only would this project be a long-term investment for the Emsland Group employees as well as the local farmers who deliver the raw materials, but also a commitment to minimizing the environmental impact and supporting the local economy."

Florian Schmidt-Hickmann described some ways in which this was implemented:

"For example, the energy used to dry the wet product is used from the neighboring scrap wood and straw power plants, so we were able to achieve CO2 neutrality with this key step in the process."

"We have also invested one-third of the project costs, approximately EUR 10 million (about USD 11 million), into the local economy by utilizing many local companies and partners to achieve our goals in this project."

Each year, the production complex processes starch from more than 60,000 tons of potatoes, coming from approximately 1400 Hectares of farmland or covering the space of approximately 2000 soccer fields. Over 500 tons of sellable products have already been successfully produced while testing in the new facility.

Products are continuously being tested in the R&D facility and applied to large-scale production during the current test phase, with the next test planned for January/February 2022. The plant is planned to be fully functional, operating 24/7, by the beginning of 2022, with the commissioning and optimization phase coming to complete the following summer.

The investment in WaltrAut represents the beginning of a long-term investment campaign at the Emsland Group, called EmVision 2030, in which the Emlichheim site will continue to be modernized for producing modified starches for special applications worldwide.
Source
Emsland Group
Like to receive news like this by email? Join and Subscribe!