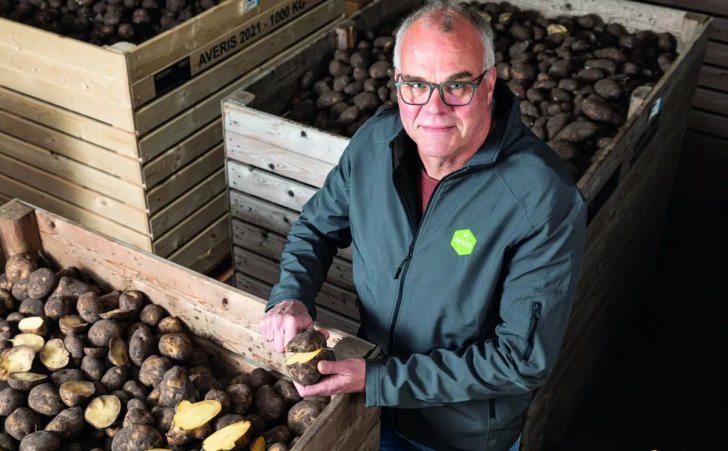 Due to the current scarcity of fertilizers, the 'red areas' and the increasing production costs, efficient nitrogen fertilization is becoming increasingly important. Patrick Riek, account manager at Royal Avebe, has full confidence in the nitrogen-reduced fertilization strategy for good cultivation and fertilization advice.

"Based on plant physiology, this can be explained as follows: a high N-dose (nitrogen) at the beginning of the growing season ensures better growth of the leaf mass of the potato plant."

"The additional advantage of a larger leaf mass decreases sharply above a certain leaf mass due to self-shading and the greater need for maintenance."

"The fertilizers that only stimulate leaf growth, but do not lead to a higher yield, can therefore be saved."

From leaf growth to tuber setting – the decisive moment

In addition to a reduced amount of nitrogen, the moment that plants are fed with fertilizers is also crucial for the highest possible yield.

"About the moment between crop closure and flowering, the plants must have sufficient nutrients and energy to achieve the desired yield."

During this transition period, the plant needs the most nitrogen.

Added value for the grower

By reducing the amount of nitrogen fertilizers, the nitrogen efficiency (ie the proportion of the entire N application actually used by the plant) can be significantly increased.

"Based on our fertilization advice, growers can save up to EUR 100 (USD 100) per hectare with the current fertilizer prices."

"Together with the resulting higher starch yield, which, based on a calculation of one tonne per hectare, means around EUR 350 to 400 (USD 350 to 400) more for the grower, we can speak of considerable added value for the grower."

According to Patrick, Avebe has therefore developed a future-proof fertilization strategy that can be the solution for the current nitrogen problem.

The increase in added value for the grower is the result of years of research that Avebe carries out on the countless trial and demo fields. Successfully! The result is a thorough fertilization advice with a lower N dose.

Patrick looks to the future with confidence and has high expectations in particular for the development of sustainable and efficient cultivation methods and for the breeding of both disease-tolerant varieties and varieties that are resistant to viruses and pests.

Sustainable potato cultivation is based on more with less: more yield with a lower footprint. Royal Avebe helps its growers with low-input varieties with a higher nitrogen efficiency. Knowledge coordinator Jans Klok sees good opportunities for the future.

In the special sustainability demo, the standard variety Seresta is compared with the varieties Adelinde and Avenger. Seresta is known to be susceptible to phytophthora and needs a lot of nitrogen, says Klok.

"If we want to reduce CO2 emissions, this can be influenced by the nitrogen addition. Both Adelinde and Avenger can use 60 kg less nitrogen/ha compared to Seresta."

A major advantage of Avenger over Adelinde is that the variety has better phytophthora resistance. As a result, Avenger needs fewer treatments against phytophthora than the other two varieties.

"If we convert the use of nitrogen and the improved phytophthora resistance into money."

According to Klok, sustainable potato cultivation and political developments do not always go hand in hand.

The first draft of the 7th Nitrates Directive Action Program stated that growers should sow a catch crop before 1 October, while after 1 September almost 9 tons of starch potatoes per hectare will still grow.

"Avebe has introduced this point to the Ministry of Agriculture, Nature and Food Quality and the rule has been relaxed in the final 7th Nitrates Directive Action Programme."

Avebe is a main manufacturer of potato starch, located in the Netherlands. Avebe sells native and modified potato starch as well as potato protein globally for use in food, feed, paper, building, textiles and adhesives industries.