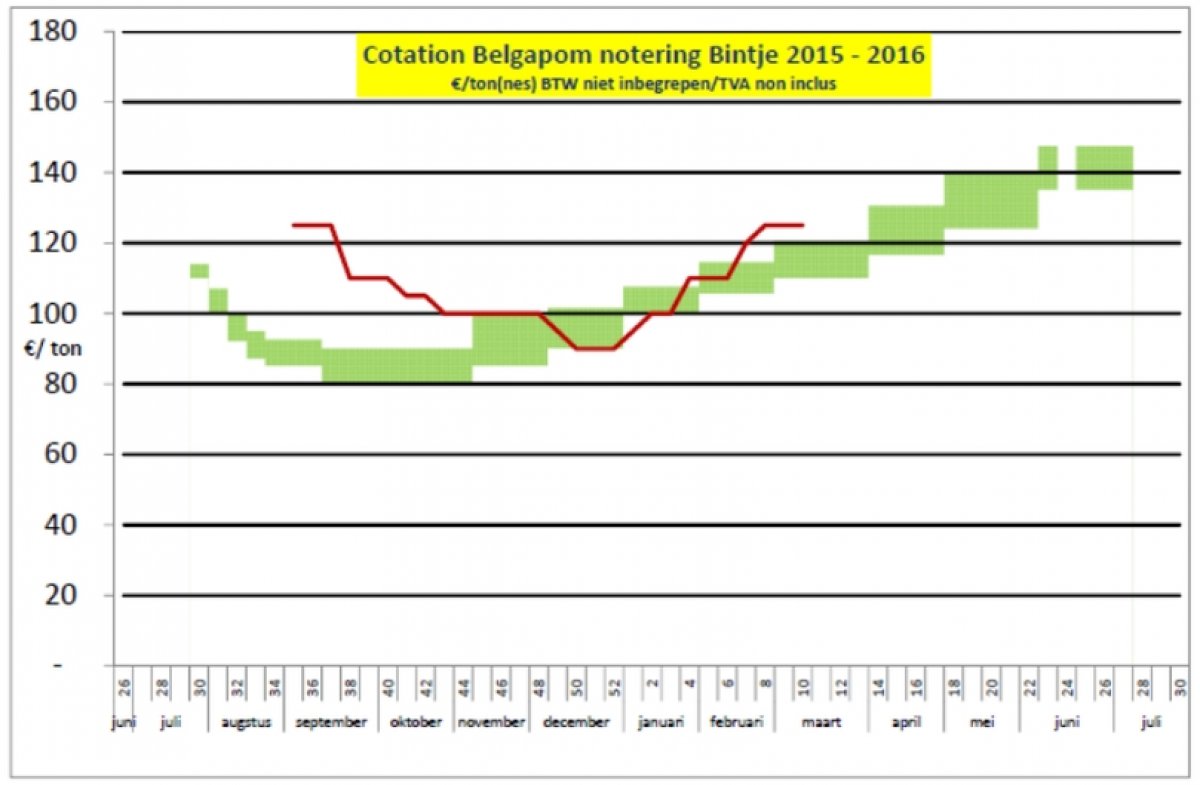 Belgapom, the association of the Belgian potato trade and processing industry, has through its price committee since 2000 every week quoted the Belgian free market price for potatoes of the Bintje variety for storage potatoes and for various varieties of early potatoes. In addition, the market sentiment was indicated. In the meantime, the Belgapom quotation has developed worldwide into an important indicator of the evolution of the free potato market destined for the frozen fries sector in Belgium.

The reason why Belgapom until now had limited itself to the Bintje variety is obvious: during the past few decades, this variety represented more than half of Belgium’s potato production and it was traded on a large scale on the free market destined for the Belgian frozen fries sector, which made a weekly quotation possible. This was not the case for a number of other varieties, that were largely produced to contract and were only sporadically sold on the free market.

In the meantime, the Belgian potato processing industry – and in particular the frozen fries sector – has developed into a leading producer and global exporter of processed potatoes. The spectacular growth over the past 25 years was also accompanied by important shifts in potato production. Thus the share of contracted potatoes increased and the Bintje had to increasingly share its monopoly position on the free market with other varieties. For a few years already, the Belgapom price committee has also included Challenger and Fontane as “observations” in its weekly quotation. It has now become clear that the share of these two varieties on the free market has become so large that a guaranteed weekly quotation is also possible.

Starting from the 2016 – 2017 season, the Belgapom quotation will be made up of three parts, each supplemented by their own market sentiment: Bintje, Challenger and Fontane.

The definition of the Belgapom quotation is being adapted as follows:

"The Belgapom price is the most-used price observed on the previous working day for Bintje, Challenger and Fontane for processing into frozen potato products, field crop 35 mm+, suitable for fries, ex producer, loose on the truck, for immediate delivery/collection."

As in the past, the quotation will be published on Friday mornings and will be available on the Belgapom website as of 09:00 a.m.

In this way, Belgapom wants to unambiguously and on the basis of a representative number of transactions guarantee the situation on the Belgian free potato market destined for the frozen fries sector and offer a response to the need for complete and correct information for all the operators involved.
Bron
Belgapom
Wil je nieuws zoals dit per email ontvangen? Maak een account aan!
Genoemde Bedrijven