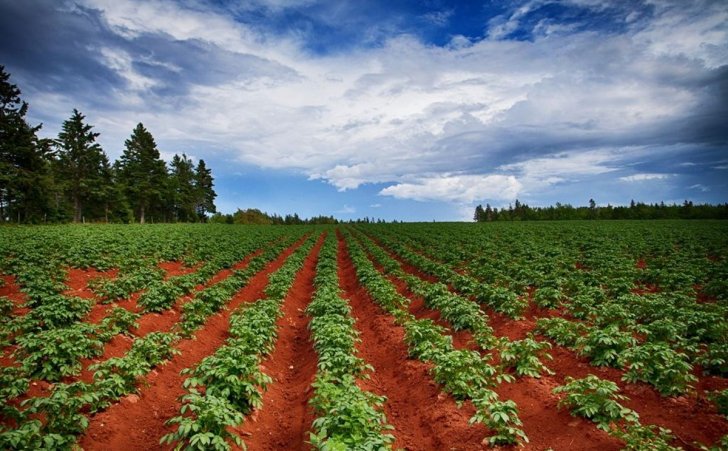 Weather patterns have continued to influence the outlook for the Canadian potato crop since UPGC’s last update. Eastern Canada (particularly PEI) has received record amounts of rainfall from the remnants of Hurricane Ida. The province of Manitoba has also received some rainfall over the past two weeks. High temperatures have broken in Alberta, but it still remains dry.

The heat has also come down this week in Quebec as well. Thoughts on growers’ minds include hopes that any potential early frosts hold off and allow the crop to finish up. Most areas will not see harvest reach full capacity until the third week of September. Here is how the crop looks at this time:

September 2nd brought the remnants of Hurricane Ida to Prince Edward Island bringing record-setting daily accumulations of rain with it. Potato fields received anywhere from 80mm to 150mm during a 24hr. period. Just one day previous, the crop was beginning to look dry in some areas that had not received significant amounts of rainfall during the month of August.

This rainfall event has greatly improved the outlook for long-season varieties such as Russet Burbanks. Growers will likely need to monitor any unwanted side effects of this rainfall dump, but to date, quality has looked excellent with no off-types or defects.

An early harvest has been very promising with some fields 50 to100 cwt. above last year’s poor yields during the main harvest. The old crop for table markets is winding down while maintaining good pricing. Old crops for processing should finish by September 7-15, allowing factories to move into new spuds.

Although the potato belt was not the recipient of large amounts of water from the recent hurricane, it did receive an inch previous and 1.5 inches the previous week before that. This should carry much of the crop into maturity as vines are beginning to lay down and lighten in color.

Early harvest on-chip stock has been very promising with reported yields well above average. The chip contact with Old Dutch has finally settled two weeks ago with a 2-yr. contract providing increases in both the 2021 and 2022 crops.

Early harvest of other varieties such as Shepody and Caribou Russet have produced high yields. French fry companies continue to show interest in purchasing open potatoes to meet their needs in other regions due to the stresses of hot, dry, weather conditions.

The excessive summer heat broke on Monday after the province received an inch of rain on Sunday. Some areas received only in the range of 7-8mm. The russet crop has been stressed with plants falling down in the heat, so the reprieve may be too late for those fields.

The early harvest was very good with high yields and good quality. Overall yields will be higher than a year ago, although growers are looking at a smaller size profile. There are lots of 100 count sizes but cartons requiring bigger sizes such as 60 counts will be more limited.

Marketers in Quebec are finding movement a little slow, likely due to a hot summer for cooking, and the need to take vacations after being couped up with COVID-19 restrictions. Dealers are talking with banners on product ads and look forward to the return to school cycle of normality.

As always there are some shorter season growers who are anxious to move their crop at this time of year. Both the French fry processor and chip company have settled contracts with increases – some for 2021 and some for 2022.

The season is rolling along in Ontario as producers anticipate harvesting a good crop. Some irrigation systems were shut off earlier this year with natural rainfall being more abundant throughout the season. The quality looks very good, on most varieties.

Growers are looking forward to the cooler temperatures which will allow safe storage for that part of the harvest. Early table harvest has been a good one, with good quality and yields reported. As in other provinces, there is pressure to move that out of field crop before other areas enter the marketing window.

Dealers would like to see demand pick up with the end of vacations and return to school schedules in September. Out-of-field chip stock harvest continues on, with good yields reported. Some chip producers are going to storage this week, almost ten days ahead of schedule.

Fresh potato growing areas of the province contain many nonirrigated acreages and have been dry throughout the season. The Winkler area, in the last 2.5 weeks has received 4 inches of rain but unfortunately, it was too late for much of the table crop and current yield predictions are for 2/3 of normal.

There has been very little shipping happening, although some yellows from the irrigated ground have been marketed with good yields reported. Table potatoes in the Red River Valley, south of the border, also had similar rain patterns recently which will help put some weight on the later crops after a very dry season.

Processing potatoes, particularly russets have struggled to keep up with the hot dry season. Some early out of field harvest has been done, mostly on Rangers. Growers would prefer to wait a little longer to see if they can achieve a better yield per acre in the out of field deliveries. Long season varieties such as Russet Burbank have been particularly stressed from the heat of the season.

Although it has been a hot dry season, the crop generally looks good. Growers feel some of the success is due to a good irrigation source with access to lots of water for the crop throughout the season. A lot of the seed, the crop has been top killed, and harvest is ready to get underway.

Early harvested Rangers have been disappointing, in the 10-11 tons/acre range. Current ten-foot strips in Russet Burbanks point to yields of 13-15 tons/acre so the crop will need another three weeks to put some weight on. Processing demand is strong, and all three fry plants of McCain, Lamb-Weston, and Cavendish Farms are running new crops.

Chip yields seem to be satisfactory for those growers, as well as for those producing baby creamers for the fresh market. The seed crop is a bit variable depending on which areas got rain in that growing region.

The Lacombe area seems to be one of the better areas, having received more moisture than others. All growers are anxious for their crop to finish up bulking before the main harvest begins on September 20th.

The growing season has been hot, particularly in the month of July. The net effect seems to be a good crop, but one which does not have a lot of large size potatoes in it. Recent variety trial field days show many plants with a higher set, but a smaller size profile.

About three-quarters of the fields are topped, and temperatures are cooling down from 20 degrees in the daytime to 9 degrees at nighttime, making for good harvesting and storage temperatures. Many growers require four weeks for skin set on red and yellow varieties, so the main harvest should be rolling by September 20th.

The next crop report will see most producers busy in their fields harvesting the fruits of their labor. All eyes are to the sky for a successful finish to the growing season accompanied by good weather conditions to remove the crop from the soil. Best of luck to all potato growers for a great harvest, and most importantly of all, work safely in your efforts.
Bron
United Potato Growers of Canada
Wil je nieuws zoals dit per email ontvangen? Maak een account aan!
Genoemde Bedrijven

McCain Foods Canada - Coaldale is one of the French Fry production plants of McCain Foods (Canada), located in Alberta

The Cavendish Farms - Lethbridge facility was acquired in 2012 from Maple Leaf Foods, it is the former Maple Leaf Potatoes facility.
Potato varieties mentioned