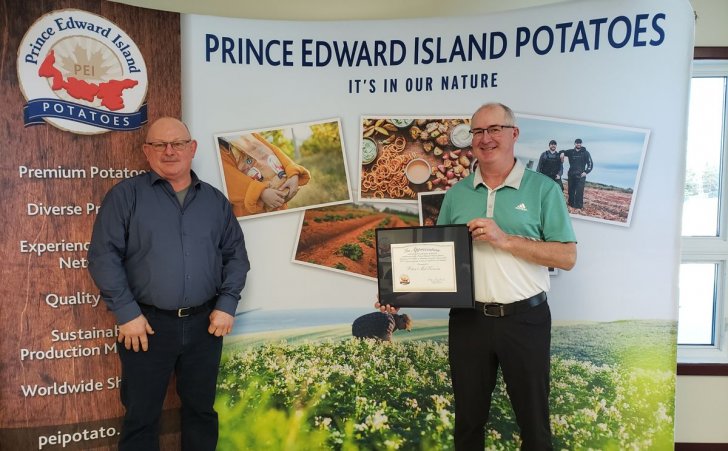 The PEI Potato Board traditionally presents Potato Industry Recognition Awards at its Annual Banquet. The awards recognize individuals who have made significant contributions to the industry through their business dealings and volunteering their time and expertise to a wide variety of committees, boards and organizations that work on issues of importance to the potato industry.

Due to COVID-19 protocols, the banquet was not held this year. Three awards were presented to well deserving industry members at the Board’s monthly meeting in March 2021 and they will be recognized at the Annual Banquet in 2022. The Award winners for 2021 included:

Peter McKenna grew up on the 48 Road in eastern PEI and learned the potato business from his father Terence and Uncle John. On leaving school in 1979, he started working in the family potato brokerage and packing business. When McKenna Brothers were looking to expand into the offshore export market in the late 1980’s, they recognized the value of mentorship and continued to work with Mitch MacLean when they took over his export business Island Shipping.

Peter had a good grasp of how to calculate risks and a knack for being able to put together deals that at first glance had seemed impossible. He was well respected by buyers in South America and domestically and knew how to handle situations should they arise.

To Peter, his word is his bond and a handshake is binding. These characteristics have made him a trusted partner in an industry where trust is paramount. This trust, built over four decades, has enabled him to put together strong deals that have benefited Island growers, buyers, and industry partners.

Peter was active on the executive of the PEI Exporters Association for many years and was also a member of the Board of Potatoes Canada in the 1980’s and 1990’s. This organization was a partnership between potato export companies in PEI and NB and the Canadian government to promote the export of Canadian seed potatoes around the world. Peter helped to host numerous and diverse groups of visiting buyers from South America and Europe and used the personal contacts to broker many deals that benefited PEI potato farmers.

Peter continues to live on the 48 Road with his wife Kelly, daughter Morgan and son-in-law to be Jean-Marc Evans-Renaud. Peter is now in business with his son Matthew, who resides in Stratford with his wife Dr. Michelle McKenna, as they continue the family legacy of buying and selling Prince Edward Island potatoes. Their focus now is in the shipment of high-quality seed potatoes and bringing new potato varieties to Island farmers in an effort to increase marketable yield.

Charles grew up on a mixed farm with dairy, pork, chickens, potatoes and cash crops. He graduated from St. Dunstan’s High School and took several business and law courses at UPEI and also completed a farm mechanics course at PVI. This continuing education has been helpful in running the farm business.

Wilhelmina (Willie) immigrated to Canada with her parents from Holland in 1953 at the age of 5 and went to school in Vernon Bridge and Montague. Following High School she graduated from Union Commercial College in Charlottetown with a Diploma in Bookkeeping and Financial Planning.

Charles and Willie Murphy have had a life-long passion for agriculture and have farmed for more than 53 years, with experience being their greatest teacher. In the early years, they had dairy, pork, beef, cole crops, turnips, tobacco and cash crops. In the 70’s their interests led them to growing contract seed potatoes for the PEI Potato Board.

Charles was one of the early Elite Seed potato contract producers working closely with Agriculture Canada and the Potato Board to produce high class seed potatoes for Island commercial producers. For a time, the Murphy farm provided a back-up location for the Fox Island Elite Seed Farm called the China Point plots, growing as many as 96 seedlots of various varieties and classes.

In 1993 they started their own screenhouse nuclear production which they continue to the present day. Seed potatoes remain the focus of the operation, and while no longer in the livestock business, they also grow seed wheat and corn.

In the year 2007, the Murphy Farm won the Canadian Horticultural Council International Award for Champion Seed Potatoes at the Royal Agricultural Winter Fair in Toronto.

Charles and Willie both maintain strong ties to their community and have served on various committees and organizations over the years. Charles has served in a number of leadership roles in the potato industry and served on many agricultural committees and boards such as:

The Murphy Farm has adapted over the years and many changes have been made to comply with environmental and food safety requirements such as observing buffer zones and stream and waterway setbacks, meeting pesticide applicator certification and crop rotation requirements and enrollment in the CanadaGAP food safety program.

Charles and Willie are very busy with their six children, 17 grandchildren and now 3 great grandchildren, all of whom live on PEI. They are proud of the family farm operation that they have built and are pleased to transition the farm over to their two sons Randy and Francis. They have always strived to maintain family farms that contribute to a positive way of life on PEI.

Morley Wood grew up in Mount Tryon and is the fifth generation to farm the land near Albany, PEI. His two sons Greg and Jeff are the sixth generation, and Morley’s grandson Alex is home on the farm, making it seven generations of tilling the soil and growing food, most notably seed and tablestock potatoes.

They also have a packing shed on the home farm, are licensed potato dealers, and Morley was one of the founding partners of Mid-Isle Farms, a major packing shed operation in Albany.

Morley has provided leadership to the Prince Edward Island potato industry for decades. He served four terms as Chair of the PEI Potato Board, the most ever by an individual, was Vice Chair for two terms, and served a total of nine years on the Board during the period 1994/95 to 2008/09. He represented the Potato Board on the PEI Federation of Agriculture Board of Directors, and served on local committees including the Farm Practices Review Board and the Continuing Education Credits advisory committee for pesticide licensing.

He has contributed to national and international potato organizations for many years as well. Morley has been a long term director on the Canadian Horticultural Council, representing the Potato Board and more recently, Mid-Isle Farms. He provided wise counsel around the Canadian Potato Council table, and his ability to explain things from the farmers’ perspective while at times challenging PMRA, CFIA, AAFC, Stats Canada and others was effective. People paid attention when Morley approached the microphone at those meetings.

They saw the potential of what Albert was trying to do and invited him to PEI to share his vision with Island growers. The PEI Potato Board developed an acreage buydown not long after that, and United of America and United of Canada were formed.

They did not always have an easy road, and Morley was the voice of reason that encouraged those involved to remember their objective of improving market information for growers, thereby allowing them to make the best possible decisions to match supply and demand. Returns for growers have improved over the years as United built its supply and demand data collection capabilities and that information was shared with farmers, building relationships between potato industry representatives that have strengthened over that time.

Morley’s interest in the latest developments in potato technology led him to attend World Potato Congress meetings in many countries, and he has actually been to all seven continents of the world. Not many people can say that, and it is a sign of his determination and interest in the broader world.

He has attended the Potato Expo in the U.S. for years, and developed relationships with potato industry representatives from many provinces, states and countries. He has always been welcome wherever he goes and we are honoured by and thank him for his leadership and advice over the years.
Bron
Prince Edward Island Potato Board
Wil je nieuws zoals dit per email ontvangen? Maak een account aan!
Genoemde Bedrijven

United Potato Growers of America is a federated farmers cooperative that focuses on managing national potato supply so as to positively affect grower economic success.

Murphy's Seed Potatoes is a producer of quality potato seed and grain for the North American market. They are located on Prince Edward Island on the east coast of Canada.
Lees meer over:
AardappelketenBrancheorganisatiesMore...Trends in landbouw en voedselOnderzoek en ontwikkeling (R&D)Aardappelrassen en pootaardappelen