Leading UK potato supplier Greenvale AP is on target to reduce its water usage by 100 million litres a year after rolling out its revolutionary Cascade eco root vegetable washing system to its Floods Ferry site in Cambridgeshire at a cost £1.7 million.

Together with the first Cascade system installed at Tern Hill in Shropshire in 2009, Greenvale is aiming to slash its water usage by 80 per cent and cut the energy costs of chilling the water by 50 per cent.  The system also processes the sand and soil which is siphoned out of the water to be reused and sold on, so that almost everything is recycled.

Product quality is also improved with the potatoes being washed in constantly recycled clean, chilled water, reducing the risk of bacterial cross contamination.  This increases the shelf life and also improves the appearance of the 300,000 tonnes of potatoes processed each year at the two sites. The system enables the company to supply their customers with an end product which benefits from the enhancements made possible by the Cascade process. 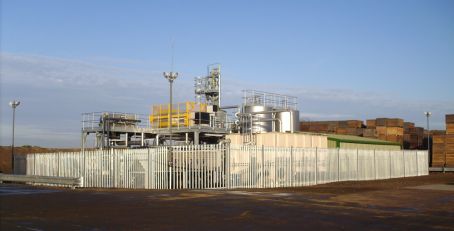 The installation of the system at the Floods Ferry site was made more complicated by the terrain of the Fenland marshes which necessitated the sinking of 15 metre deep piles of concrete to stabilise the concrete pad on which the Cascade system sits.

Greenvale’s Operations Director, Trevor Dear said: “We are very proud to lead the industry with this revolutionary system.  Although the investment at Floods Ferry has been significant, from the savings it will generate we expect to cover our costs within four years. We are now planning to roll out the system to our processing site in Duns, Berwickshire by 2014.

Reducing water consumption is one of the areas where Greenvale is leading the way in the fresh produce world. The root vegetable washing system has the potential to save the UK food processing industry up to 80% of water used every year as well as delivering substantial product quality and plant hygiene improvements. Cascade has been instrumental in Greenvale hitting their environmental targets set in their Green15 initiative – to reduce their overall environmental impact of water use 50% by 2015.

The Cascade system has so far won five major awards: The Re-Fresh Innovation of the Year Award, the Food Processing Environmental Initiative Award, The E.D.I.E Award for Water and Wastewater, The Footprint Award for Sustainable Use of Natural Resources and a Golden Green Apple Award.

The company has been leading the way in cutting edge technology and has previously won the Queen’s Award for Innovation for its pioneering work in innovation and development of Restrain, a natural modified atmosphere storage system which boasts some significant environmental credentials.