A potato that's purple on the outside and yellow on the inside is one of four new varieties coming to Montana to help attract new markets for the state's $40 million seed potato industry, says Nina Zidack, director of the Montana State University Potato Lab.

Fifty-two family farms in Montana already supply seed potatoes to Idaho, Washington and other states that are famous for their potatoes. Montana, in fact, provides almost half the seed potatoes planted by commercial growers in the Columbia basin, which includes Washington and Oregon. But weight-loss programs and efforts to remove potatoes from school lunches have led to a small decline in potato consumption, according to one Montana industry leader.

Zidack said MSU has a new two-year grant from the USDA Specialty Crops program that will allow the Potato Lab - officially called the MSU Seed Potato Certification Program -- to enhance the marketing of Montana seed potatoes for garden seed and bring in four new potato varieties that will appeal to Montana gardeners. Because Montana provides the seed stock for such a large portion of the nation's potato crop, it has the nation's strictest regulations governing seed potato production.

All commercially grown seed potatoes in Montana are grown under very strict disease tolerances. It is important for quality certified seed to be planted in home gardens, so as not to endanger the broader potato industry, Zidack said. All certified seed potatoes in Montana originate in the MSU Potato Lab. The new grant will also help the lab publish a directory of seed potato varieties certified in Montana that specifically appeal to gardeners, Zidack said. The lab will run an educational campaign, too, to encourage more home gardeners to grow Montana-certified seed potatoes. The $25,000 grant comes from the Montana Department of Agriculture through the USDA Specialty Crops Block Grant program. 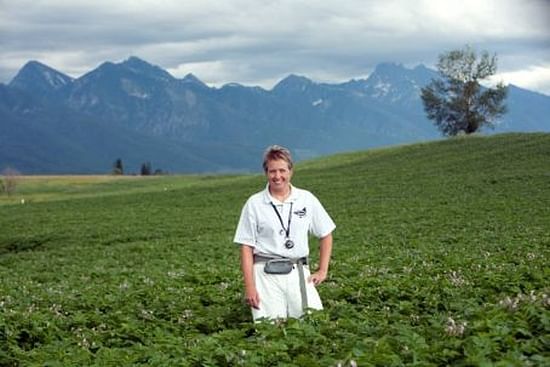 Nina Zidack, director of the MSU Potato Lab, says Montana's seed potato fields are located in some of the most beautiful spots in the state. She is shown here during a July 2011 inspection of a field near Ronan. (Photo by Susan Lake).

Besides the two-tone potato, the new varieties coming into Montana will include a potato that's completely purple, and two varieties of long potatoes called fingerlings. Colored potatoes are nutritious, high in antioxidants and popular with consumers, Zidack said. Blue, red and other-colored potato chips are already sold in grocery stores and restaurants. Fingerlings are often used in gourmet recipes.

Once the new varieties have tested 100 percent free of disease, they will be added to the 28 seed potato varieties already certified for growing in Montana, Zidack said. Existing varieties include an all-blue heirloom potato used to make blue potato chips, a potato that has shallow pink eyes, a potato with deep purple skin dappled with pink splashes and stripes, and many popular russets. Potatoes have different characteristics, making some excellent for potato salads and others perfect for mashing, baking or frying.

The new varieties should be available to gardeners in two or three years after the growers have taken plants from the lab and increased them in the field, Zidack said.

The Potato Lab tests for three types of viruses that reduce yield of potatoes and cause mosaic patterns on potato leaves, Zidack said. During the summer, six inspectors also walk through every seed potato field in Montana to examine the plants. Montana has 10,000 acres of seed potatoes, with the largest growing area around Manhattan and Amsterdam in Gallatin County. Other significant areas are in Beaverhead, Madison, Broadwater, Lake and Flathead counties.

During the winter, the lab conducts post-harvest testing by shipping tuber samples from every field and every variety grown in Montana to a former sugar plantation in Hawaii, Zidack said. The tubers are planted in plots and inspected after 40 days.

Testing plants during the off-season allows Montana growers to have the results before their growing season begins in the spring, Zidack said.

Montana seed potatoes have a good reputation because Montana has the nation's strictest regulations for producing them, Zidack said. The relative isolation of fields, the cold weather and the fact that many fields are at high elevation also benefit Montana's seed potato industry, she said. Winters and the isolation provided by the mountains help control pests. The distance between growing areas cuts down on the transmission of diseases.

The seed potato directory will benefit commercial growers with increased market opportunities, but the Potato Lab wants to encourage home gardeners to plant Montana-certified seed potatoes, too, Zidack said. One reason is that certified seed potatoes grow better potatoes than potatoes bought in a grocery store or potatoes left over from previous seasons. Potatoes sold in grocery stores are often treated to restrict the sprouting of tubers, Zidack said. And more importantly, they may come from other states and carry virus diseases and tuber and soil-borne pests.

Some gardeners want to grow the specialty potatoes they have seen in magazines, so they order seed potatoes from catalogs, Zidack said. Montana allows the importing of seed potatoes for gardens, but those potatoes may come from areas that have frequent outbreaks of Late Blight and higher levels of virus diseases.

"Increased planting of Montana-certified seed in gardens will reduce the risk of introducing pathogens or other pests which would cause serious disease outbreaks resulting in monetary losses to growers,"Zidack said.

Roger Starkel of Ronan, vice president of the Montana Potato Improvement Association, said he welcomes the new grant and anything else that will benefit Montana's seed potato industry. Noting a small decline in potato consumption, he said, "We are hoping to pick that up."A second-generation potato farmer who raises about 11 varieties, Starkel said he has raised seed potatoes on his own for about 28 years. Ninety-five percent of his crop goes to Washington, and a small amount to Idaho. 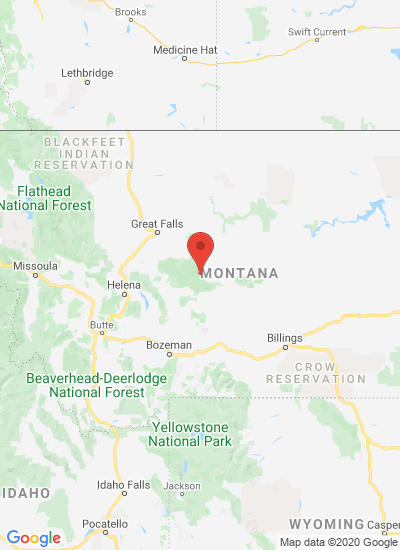