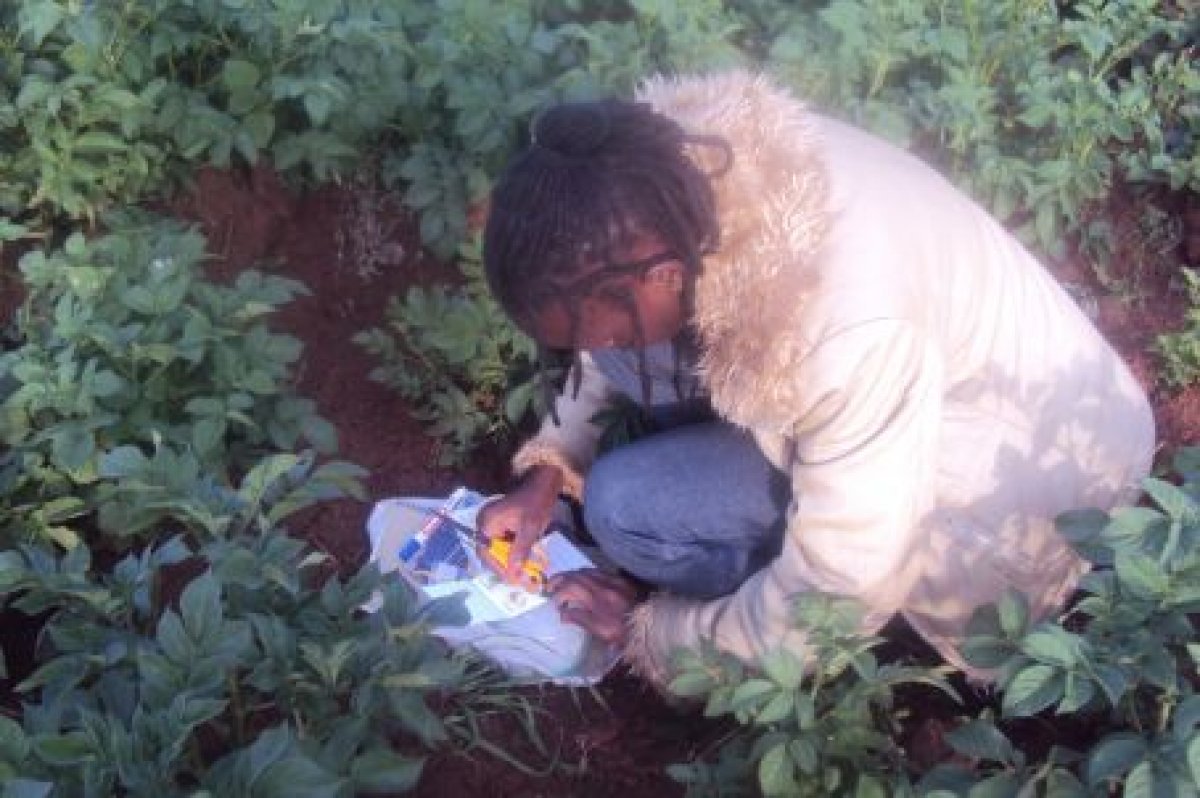 When Anne Njoroge was growing up in the village of Kikuyu, in central Kenya, she would listen to her mother and friends complain that their potato crops had been “Waru KuhIa ni mbaa” – burnt by the wet, cold weather. Years later, when she began working at the Rwanda Agricultural Research Institute’s potato program, it occurred to her that the culprit behind those crop losses had been Phytophthora infestans – the pathogen responsible for late blight, the disease behind the world’s major potato famines – but her mother and neighbors didn’t know that it was a disease.

Njoroge is now studying a new lineage of Phytophthora infestans called KE-1 that is spreading rapidly across East Africa. KE-1 appears to pose a more serious threat to the region’s potato production than the US-1 lineage that has been common there for the past half century. Njoroge consequently wants to learn everything she can about KE-1, and contribute to efforts to help the region’s farmers deal with the new threat.

The KE-1 lineage was first detected in 2007 in two potato fields in western Kenya, but when Njoroge collected and analyzed late blight samples for her Masters thesis in 2011, she was surprised to find that all the samples she collected in Kenya were KE-1. Most of the samples she collected in eastern Uganda were also KE-1, whereas most of her samples from western Uganda were of the old US-1 lineage. This indicates that the new lineage has completely displaced the old one in Kenya’s potato fields and is spreading westward across Uganda.

Njoroge, who completed her Masters at Uganda’s Makerere University last year on an International Potato Center (CIP) scholarship, is now working for CIP as a research assistant under Greg Forbes. Her current research on KE-1 will form part of her doctoral dissertation for the Swedish University of Agricultural Sciences (SLU) in Uppsala, Sweden. She’ll do most of her lab analyses at SLU, under the supervision of Professor Jonathan Yuen. Her field research is being done in collaboration with Uganda’s National Agricultural Research Organization (NARO) as part of RTB.

Njoroge explained that farmers who she spoke with in eastern Uganda, where the samples she collected were all KE-1, complained that the disease was difficult to control with fungicides. She wonders whether this means that KE-1 is more fit or has higher levels of fungicide resistance than the US-1 lineage. To answer such questions, she is studying the two lineages’ population dynamics and impacts in the region, and collecting genetic data that could be used in the development of resistant varieties.

“The ultimate goal is to generate potato varieties that are resistant to late blight in East Africa through gene transformation,” explained Njoroge. “This would allow local farmers to abandon the use of fungicides, which are expensive, pose a health risk, and are rarely applied with the proper frequency and dosage”.