The North-Western European Potato Growers (NEPG) estimates that the upcoming Potato harvest could set a new record, even higher than 2011 when production reached 26.8 million tons.

Based upon five year average yield data and various trial digs in the 5 key countries it is estimated that production could be at 27 million tons, excluding seed and starch potatoes. However, the NEPG stresses that the majority of the crop remains in the ground and to be harvested.

Total production could be up 12.1% from last season, and 10.5% more compared with the 5 year average. The two main reasons are a 3.1% rise in area and 8.7% more yield per hectare, and good tuberisation

The early spring and good growing conditions did the rest. Although the dry matter content is still lower than average the overall quality is good. According to the NEPG there are still many questions to be answered and uncertainties about the season: weather conditions during harvest and how will the crop keep in stores until the end of the season, and is there enough storage capacity? Lack of storage capacity could become an item in Germany.

The NEPG countries report that due to the low dry matter content the yield for processing will be lower than last season and more raw material will be used. The mainland countries also expect that the price level could increase to a higher level after the harvest, however it is not expected that this will match the production costs for growers.

Exports for fresh and frozen

Mainland exporters report good interest for fresh potatoes which could lead to higher exports outside the NEPG. 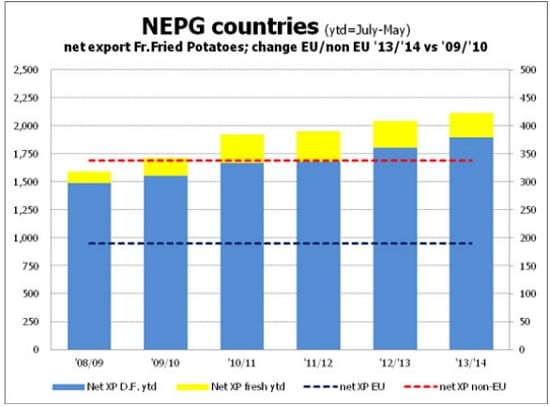 The net export of fried potato products outside the NEPG shows an upward trend. Especially the export of product outside the EU has seen a considerable increase. Due to low prices for raw material and the high value of the US dollar this export is expected expand in the upcoming season. Processing companies in the NEPG countries are all running at full capacity. According to the processing industry, since December 2013 raw material input has been at a record high.

Recently also the starch factories on the mainland have started with their campaign, an alternative outlet for consumption potatoes from Germany and the Netherlands. Last season starch potatoes went into the consumption processing, however this season it will be the other way around and many consumption potatoes will end as starch.
Source
North-Western European Potato Growers (NEPG)
Like to receive news like this by email? Join and Subscribe!
Related Companies