The potato variety "Yukon Gold" bred by Gary Johnston, a researcher at the University of Guelph in 1966

On Barack Obama’s table at holiday feasts; on Justin Trudeau’s plate at his White House state dinner; and on the Oscar gala hors-d’oeuvres trays, was a small yellow potato called the Yukon Gold.

Alexander York von Sivers, a 59-year-old man in Toronto, is on a mission to make sure everybody knows it. “It’s a story that had to be told,” he says.

York has been working for three years to publicize the 50th anniversary of the invention of this potato, which was bred by researchers at the University of Guelph in 1966. “I’m going after every food editor in the United States,” he says. “I’d like to have potato festivals across Canada. I’ve spoken with Martha Stewart’s executive director five times, and she’s trying to get me a congratulatory letter. If I had my way, I’d have a huge Yukon Gold event in Times Square.”

The Yukon Gold, with its roots in Ontario, has become a posh potato. It was served dauphinoise at the state dinner, and frequently to the Obamas, mashed. At the Oscars in February, 600 kg of roasted Yukon Golds were presented with crème fraiche and Caspian caviar, prepared at the command of Wolfgang Puck. Queen Elizabeth II dines on the potato at Buckingham Palace; Rachael Ray calls for it in her recipes; and Chelsea Clinton endorses it as a personal favourite. But as York says, “the average Canadian is not aware of the Hollywood status of this potato.” 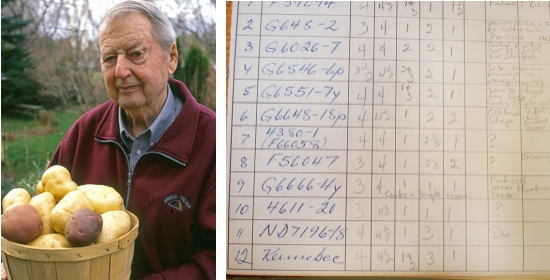 Left: Garnet “Gary” Johnston, the University of Guelph researcher who led a team that cross-bred two varieties to create the Yukon Gold. Right: notes of the trial. Yukon Gold was known at the time as G6666-4y

York has spent about 500 hours digging through archives on the potato. His fixation is partly due to his father, Hans von Sivers. Hans was a laboratory technician with Garnet “Gary” Johnston, the University of Guelph researcher who led a team that cross-bred two varieties to create the Yukon Gold. Before its invention, North American farmers only grew white-fleshed potatoes, and Johnston anticipated the appeal of a yellow, small-sized variety, which looks like it’s drenched in butter.

“It was a revolutionary concept.”

“He was a pioneer. He had the vision for yellow-fleshed potatoes.”

The invention came from a male parent grown in North Dakota (considered male because it spreads pollen), and a female, yellow parent grown in Peru. After 14 years, on the 66th cross of 1966, Johnston created a variety known technically as G6666-4y (“G” for Guelph, 4 for the fourth selection from the cross, and “y” for yellow).

Johnston originally named it after the Yukon River—his previous varieties included the Huron and the Rideau—but his colleague Walter Shy suggested adding the word “Gold” in honour of its yellow tint. Not to be confused with “new potatoes,” which are small, sweet spuds of any variety picked earliest in the season, the Yukon Gold has pink eyes and tan skin.

Soon after Yukon Golds hit the market in 1980, chefs were serving it to presidents.

“When I started at the White House, it became like the new kid on the block.”

“I like the butteriness of it. I do a purée, with added parsnip purée and sweated-down leeks. It’s a nice smooth consistency. When you see a white potato, it just doesn’t look as appealing.”

Moeller also cooks Yukon Golds au gratin with garlic custard, and he roasts baby Yukons to serve as marble-sized garnishing. “You can put one potato on your fork and eat it in one bite,” he says.

“It was known in all of North America as the champion, the best yellow potato that was ever grown.”

“If you said ‘I got a load of yellows,’ the first question out of the buyer would be, ‘Are they Yukon Golds?’ ”

“You see it in the grocery stores,” says De Jong. A different controversy arose in 1997 when Hillary Clinton falsely claimed that everything on the menu at a White House state dinner, including the Yukon Golds, was American. A New York Times food editor exposed the slip-up, and the Clinton administration issued an apology, giving the Yukon Gold a marketing boost. “Without the New York Times,” says York, “this potato never would have succeeded.”

Johnston died in 2000, at age 85, of diabetes complications, having never made a penny off his potato (prior to the 1990 Canadian Plant Breeders’ Rights Act, breeders didn’t have intellectual property rights).

York now wants to commemorate the man’s work and build a library on the potato.

“I want to make sure Gary Johnston isn’t a footnote in Canadian history.”

University of Guelph
Where