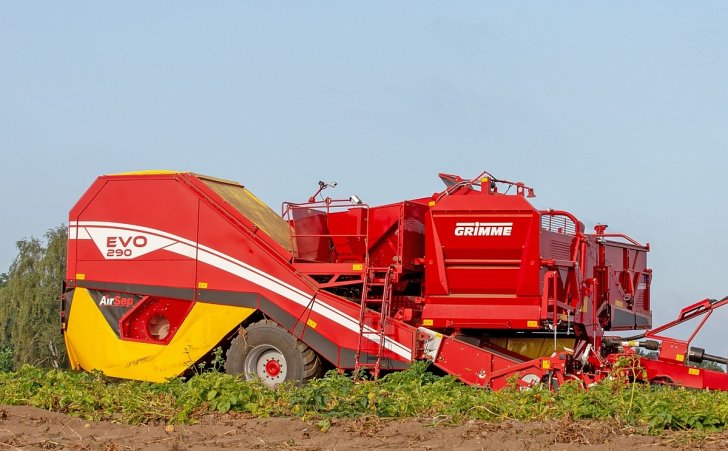 Agricultural Equipment manufacturer Grimme shows a range of potato harvesting equipment in its booth at Interpom | Primeurs in Kortrijk, Belgium from November 25 - 27.

At the Agritechnica 2013 GRIMME and their subsidiary SPUDNIK from the USA presented the revolutionary AirSep separation device for stones and damp clods of soil, which was awarded the DLG gold medal.

Since then over 150 potato harvesters and storage machines have been sold by Spudnik with AirSep technology. The AirSep has been extensively tested and developed over the last 4 years, so that both the space taken up in the machine and the power required could be considerably reduced.

With the new development of the 2 row towed harvester the EVO 290 with a 9 tonne bunker and the TriSys axel to reduce soil compaction, also came the opportunity to integrate AirSep into a Grimme machine for the first time.

After the intake, the crop is moved onto the first mainweb.

As it passes onto the second mainweb the haulms are separated from the crop by the deviner web.

The potatoes as well as the remaining impurities are then transferred from the second mainweb onto the AirSep separation device. The generated airstream then separates all stones and wet clods. The position of the AirSep allows for maximum crop protection, as all the waste is removed from the crop flow at an early stage. These are then transferred into a waste bin which can be emptied at the edge of the field. 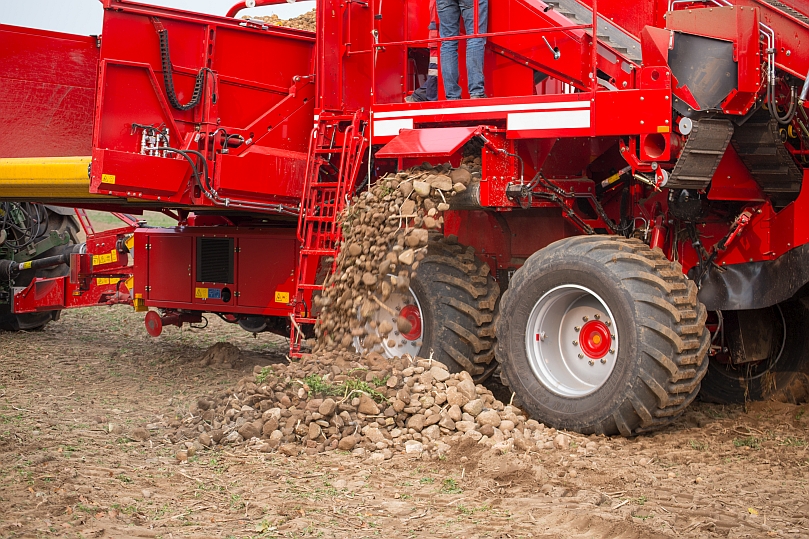 Finally, the potatoes reach the two tried and tested hedgehog separators. The finger web separator takes care of dry clods. The potatoes then end up in the 9 tonne bunker, via the picking web.

The driver can alter the AirSep from the terminal in the cab, however this should rarely be necessary. The AirSep is powered by the integrated internal hydraulics of the machine meaning that another motor for the device is not required. A 205 hp tractor is required to pull and drive the EVO 290 with AirSep, which is only 25 hp more than the machine needs without an AirSep.

The EVO 290 AirSep is the worlds first bunker harvester with the patented separation device and combines the outstanding performance of the SE machines with the unmatched accuracy of the AirSep. This makes the EVO 290 AirSep the most high performance but also product friendly bunker harvester in the world.
Source
Grimme
Like to receive news like this by email? Join and Subscribe!
Related Companies

Spudnik is a manufacturer of potato equipment in the United States.
Products