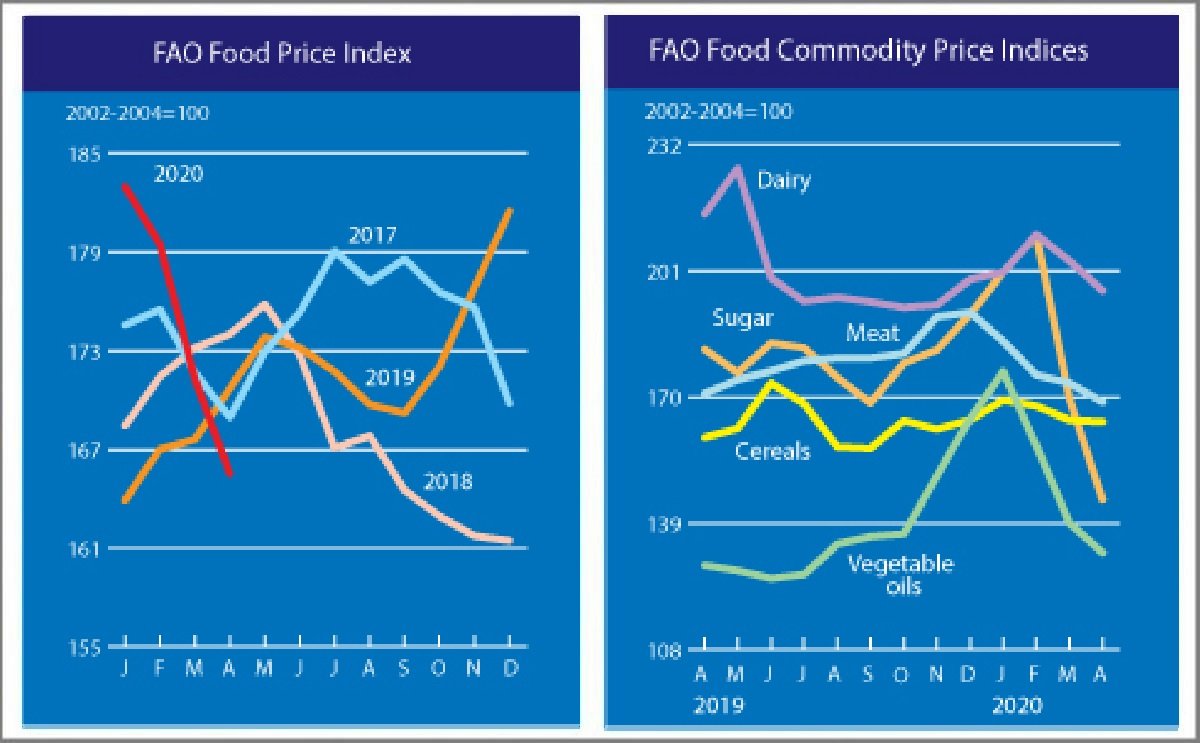 The FAO Food Price Index* (FFPI) averaged 165.5 points in April 2020, down 5.7 points (3.4 percent) from March and the lowest since January 2019. The April decline marked the third consecutive monthly fall in the value of the Index; largely attributed to several negative impacts on international food markets arising from the COVID-19 pandemic.

Except for the cereal sub-index, which declined only slightly, all the other sub-indices of the overall Index registered significant month-on-month declines in April, in particular, the sugar sub-index.

The FAO Cereal Price Index averaged nearly 164.0 points in April, down marginally from March but still up almost 4.0 points (2.4 percent) from April 2019. Among major cereals, international prices of wheat and rice rose significantly in April, but a sharp drop in maize quotations kept the overall value of the FAO Cereal Price Index close to its level in the previous month.

Wheat prices averaged 2.5 percent higher month-on-month, reflecting strong international demand amid reports of a quick fulfillment of the export quota from the Russian Federation, which was implemented in late March and is not expected to be adjustable until the end of the current marketing season on 30 June.

The imposition of temporary export restrictions and logistical bottlenecks in some suppliers fueled a 7.2 percent monthly increase in international rice prices, although increases were capped by the easing and eventual repeal of export limits, namely in Viet Nam, towards the end of the month.

By contrast, international maize prices registered a third consecutive month of decline, pushing down the overall value of the coarse grains index by 10 percent from the previous month.

The continued decline in palm oil prices was driven by the plunge in international crude oil quotations and sluggish global demand for palm oil in both the food and energy sectors because of the COVID-19 pandemic. Higher than expected palm oil output in Malaysia added to the downward pressure on prices.

The FAO Dairy Price Index averaged 196.2 points in April, down 7.3 points (3.6 percent) from March, registering the second consecutive month of decline and now down 18.8 points (8.8 percent) from its value in the corresponding month last year.

With milk production in the northern hemisphere normally rising at this time of the year, diminished restaurant sales and reduced demand from food manufacturers also weighed on prices.

By contrast, price quotations for cheese rebounded moderately on account of limited spot supplies from Oceania, where production is seasonally declining.

In April, international quotations for all meat types represented in the index fell, as a partial recovery in import demand, mainly in China, was insufficient to balance a slump in imports from other countries, caused by continued COVID-19 related economic hardship, logistical bottlenecks and a steep fall in demand from the food services sector due to lockdowns.

The FAO Sugar Price Index averaged 144.points in April, down 24.7 points (14.6 percent) from March, marking the second consecutive monthly decrease. This latest drop was mostly on the back of a collapse in international crude oil prices.

In addition, a contraction in sugar demand arising from the confinement measures imposed in a number of countries to contain the spread of COVID-19 spawned additional downward pressure on world sugar prices.

Part of the United Nations, the primary task of the Food and Agriculture Organisation (FAO) is to achieve food security for all
Read More
Related Topics
Ingredients
Food Trends
Food Prices
COVID-19