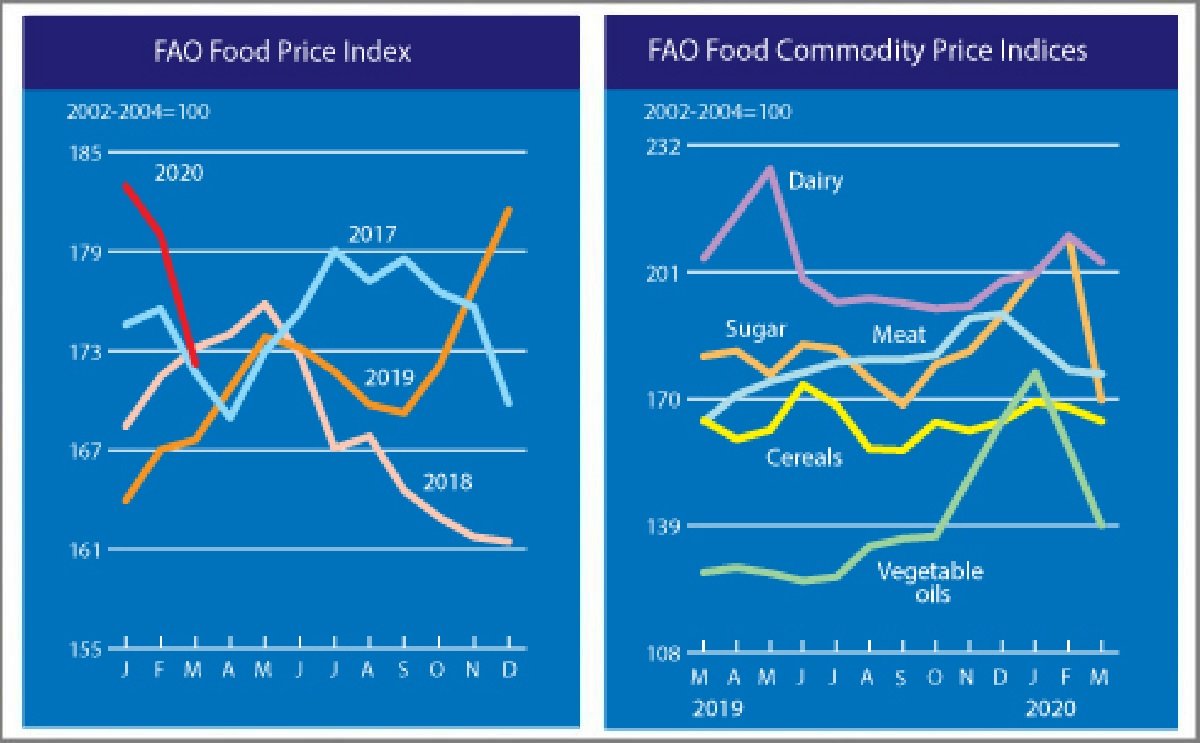 The sharp decline in March marked the second month-on-month drop in the value of the FFPI, largely driven by COVID-19 pandemic-demand contractions. While the latest fall in prices was most pronounced for vegetable oils and sugar, the other sub-indices also registered lower values in March.

The FAO Cereal Price Index averaged 164.6 points in March, down 3.2 points (1.9 percent) from February and now almost at the same level as in March 2019, as export prices of all the major cereals, except rice, fell for the second consecutive month.

Wheat prices averaged lower in March compared to February despite worries over COVID-19, which boosted trade activity, especially by countries in North Africa, and the imposition of some export limitations, albeit small, by the Russian Federation.

Similarly, in coarse grain markets, international maize prices registered a further decline in March, pressured by not only large supplies but also much weaker demand especially from the biofuel sector stemming from a plunge in crude oil prices.

By contrast, international rice prices extended their upward trend into a third straight month, reaching their highest level since June 2018, as Indica quotations were buoyed by stockpiling spurred by concerns over the COVID-19 pandemic and news of Viet Nam temporarily halting new export contracts to review its domestic supply situation and export policy.

The FAO Vegetable Oil Price Index averaged 139.1 points in March, dropping by 19.0 points (or 12.0 percent) in one month and marking the lowest level since October 2019. The continued decline in March mainly stemmed from fresh falls in palm oil prices– for the second consecutive month – which was fuelled primarily by plunging crude mineral oil prices and rising uncertainties over the impact of the COVID-19 pandemic on global demand.

Other oils followed the downward trend in palm oil. Soy and rapeseed oil prices were also affected by, respectively, higher than expected crushings in the United States of America and eroding demand for biodiesel in the EU.

The FAO Dairy Price Index averaged 203.5 points in March, down 6.4 points (3.0 percent) from February, declining for the first time after registering continuous increases for four months. At this level, the Index is also down marginally from the corresponding period last year.

Global import demand for SMP and WMP dampened considerably, mainly due to disruptions in dairy supply chains with the imposition of containment measures to control the spread of COVID-19.

Butter and cheese price quotations also eased in March, albeit moderately, due to weak import demand for spot supplies, notwithstanding seasonally limited export availabilities in Oceania.

The FAO Meat Price Index* averaged 176.0 points in March, down 1.0 points (0.6 percent) from February, falling for a third consecutive month, though still 11.6 points (7.0 percent) above its level in the corresponding month last year. In March, international quotations for ovine and bovine meats continued to fall, reflecting large export availabilities, especially in Oceania, as producers offloaded herd stocks earlier than anticipated, while imports eased in the face of logistic bottlenecks moving products overseas.

By contrast, pig meat quotations rose due to overall market tightening, as internal and foreign demand surged, while logistical problems and restrictions on the movement of workers affected meat processing.

The FAO Sugar Price Index averaged 169.6 points in March, down as much as 40.1 points (19.1 percent) from February. The significant monthly dip in international sugar prices was largely caused by the fallout from the COVID-19, as confinement measures imposed by several countries curtailed demand from out-of-home consumption.

In addition, the steep fall in crude oil prices exerted further downward pressure on sugar markets, as lower energy prices tend to boost the production of sugar instead of ethanol. This is notably the case in Brazil, the world’s largest sugar exporter.

Part of the United Nations, the primary task of the Food and Agriculture Organisation (FAO) is to achieve food security for all
Read More
Related Topics
Ingredients
Food Trends
COVID-19
Food Prices