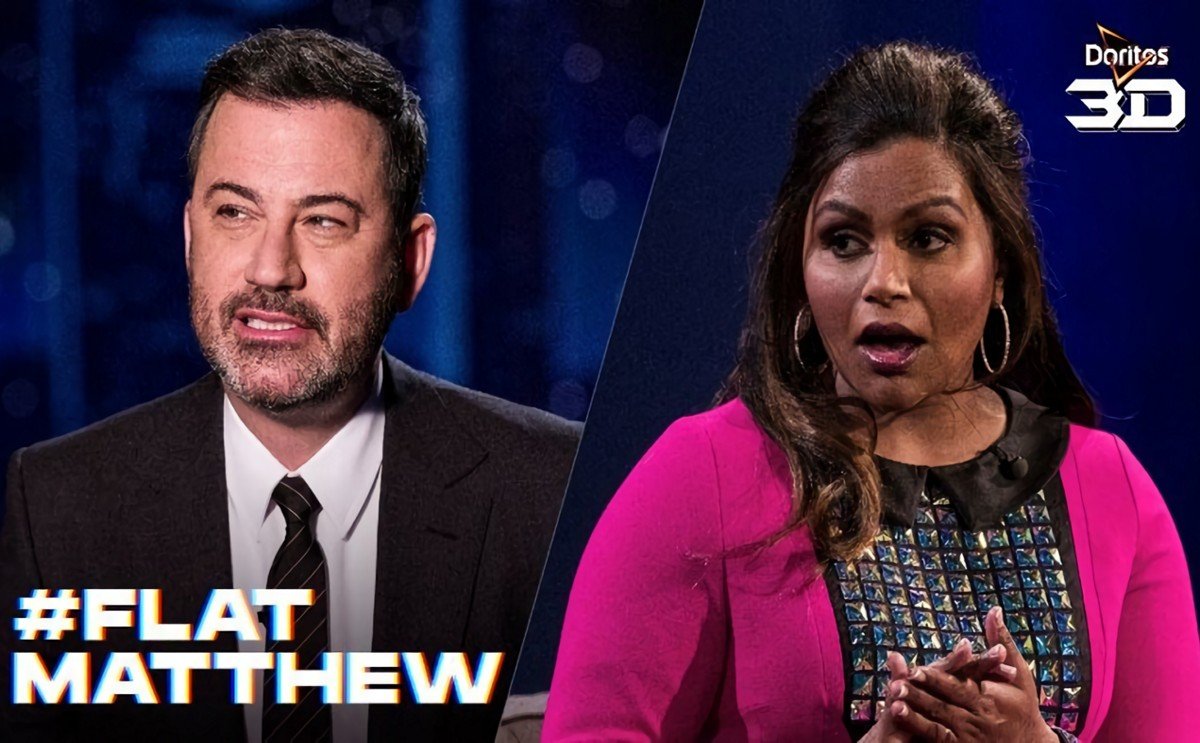 While Doritos has been a Super Bowl fixture for more than two decades, this year the brand is bringing a whole new dimension to gameday with the highly anticipated return of Doritos 3D Crunch. To mark the occasion, Doritos, one of the flagship brands from PepsiCo's Frito-Lay division, today debuted its Super Bowl campaign, #FlatMatthew, with a cliff-hanging teaser that leaves fans guessing who exactly the commercial's secret star could be.

Fans can get a first glimpse of the commercial in a teaser video Doritos dropped today [see here], which features Jimmy Kimmel introducing his mysterious talk show guest to a shocked Mindy Kaling.

"Did you see him backstage? He's got a whole new look. Like a look that no one's ever had before."

The Super Bowl campaign is in support of new Doritos 3D Crunch, one of the most anticipated Frito-Lay product launches in memory, making it perfectly fitting for the Super Bowl stage. With the highly anticipated new product and a campaign on another level for the brand, Doritos returns to the Super Bowl in the biggest way possible to back up its award-winning legacy of the past two decades.

"I couldn't be more thrilled to introduce this campaign to the world and see fans' smiles. With the launch of our biggest innovation in a decade in new Doritos 3D Crunch, we wanted to share in a big way."

"To be able to showcase this breakthrough product on the Super Bowl with the help of the incredible Jimmy Kimmel and Mindy Kaling is awesome. I can't wait to reveal our third mystery character in the story."

Doritos has become a recognized staple of Super Bowl advertising with some of the most memorable commercials in Super Bowl history, including bringing fans never-before-seen music collaborations like last year's "The Cool Ranch" or the Crash the Super Bowl era, which saw countless consumer-created Doritos ads rank No. 1 on numerous polls.

And of course, Doritos 3D's original Super Bowl ad debuted in 1998 with the memorable "Laundromat" commercial starring actress Ali Landry, who was instantly deemed the "Doritos Girl." "Laundromat" helped bring the new three-dimensional shape and flavor to households across the country — making Doritos 3D's one of the brand's most successful product innovations in history.

After years of clamoring on social media, popular petitions, and celebrity endorsements, one of the most sought-after snacks in Frito-Lay history just made a triumphant return — updated for a new generation. Doritos 3D Crunch is another level version of the original Doritos 3D's introduced in the late 1990s to immense fanfare.

Doritos is ushering back the same great product and iconic three-dimensional shape, available in two new bold flavors: Spicy Ranch and Chili Cheese Nacho. Doritos 3D Spicy Ranch and Doritos 3D Chili Cheese Nacho are in stores now in 6 oz. bags for a suggested retail price of $4.29 and 2 oz. bags for $1.89.
Source
Frito-Lay North America
Like to receive news like this by email? Join and Subscribe!
Related Companies