Potato genomes under the microscope

The DNA in humans and gorillas is about 95% identical. This percentage is much lower between potato varieties. This might sound like a fun fact to remember for a pub quiz, but for Remco Ursem and Stan Oome, it is a premise that carries a serious challenge. Remco is the programme leader for Bioinformatics at HZPC, while Stan is programme leader for Molecular Biology.

On behalf of HZPC, the two will contribute to an international study into genome diversity (the Pangenome) in a potato. In other words: which genes make a potato a potato? Once you know that, you can work out which genes provide specific characteristics so that hybrid varieties will result in the best yields in all four corners of the earth.

Difficult to get your head around

"Each variety has its own DNA book, its genetic code. In the case of the potato, it actually has four similar books, since each parent passes on two copy codes. This book is divided into chapters, the chromosomes. A single copy of the entire book contains between 40,000 and 50,000 genes." 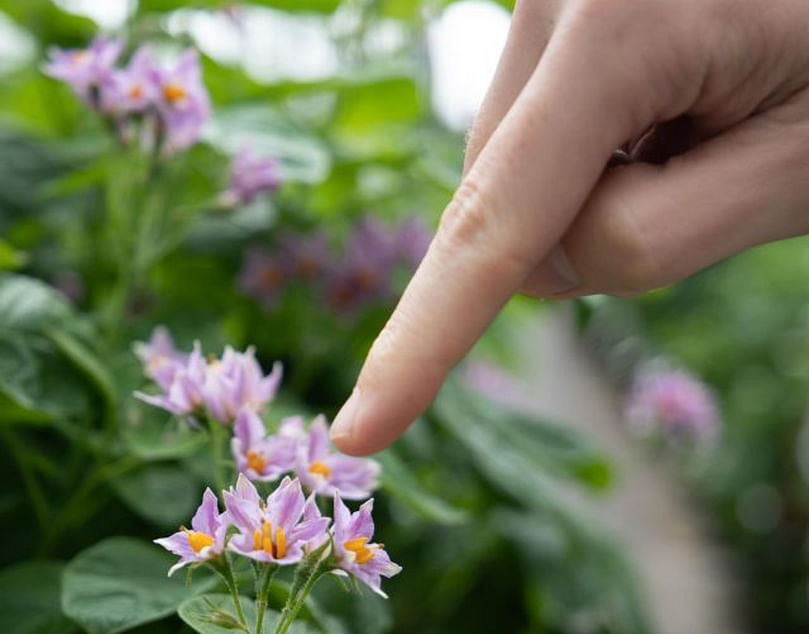 Each variety has its own DNA book, its genetic code.

So which genes make a potato a potato? We've spoken about the similarities between the books, in other words, their appearance, but the content of the chapters is extremely varied.

"We can recognise structures in the genes, but that's about it. The potato, quite simply, is a very versatile and distinctive crop."

"The end product has a piece of underground stem that stores starch, and it is this diversity that is reflected in the genetic code. That makes potatoes a difficult crop to get your head around and to successfully breed."

Just take a look at the yield per hectare. This has not progressed particularly rapidly in recent decades, whereas other crops are now exhibiting strong growth.

This is all to do with the complicated genomes. In fact, it’s particularly to do with the fact that potatoes that are hybrid bred always inherit a new, unique mix of four genetic codes that makes it tricky to precisely unravel which genes (and combinations of genes) result in which specific characteristics.

What makes a potato a potato?

And that is exactly what the Pangenome project is meant to do. In other words, if you know which genes play an active role in what makes a potato a potato, and which genes are more like padding, a bad copy, or a characteristic that the plant can do just fine without, then it might be possible to go from four to two genetic codes per potato. 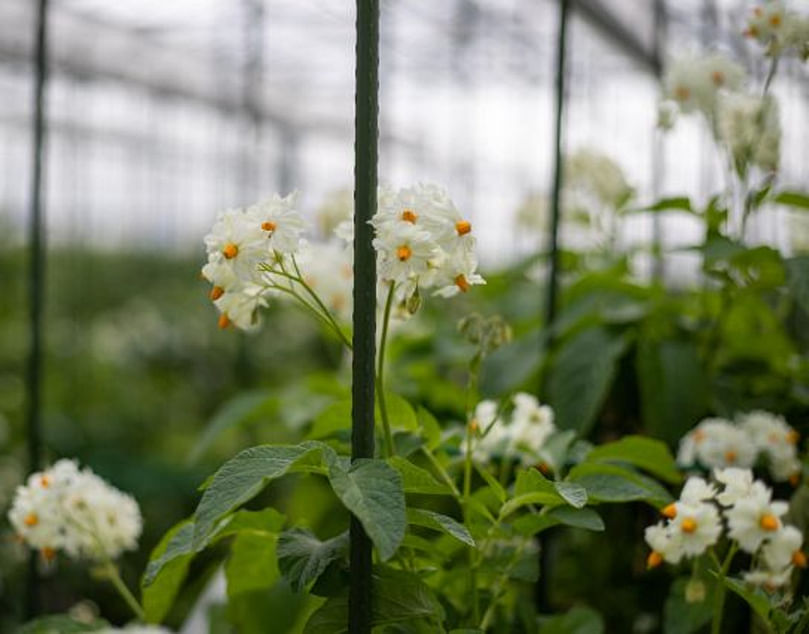 Once that has been achieved, it is easier to control the genetic characteristics that are passed on. And in a nutshell, that is breeding, something that HZPC is particularly good at.

But it could be even better if we could create a ‘genetically simplified potato’. Suppose it is possible to make a potato that has diploid cells (in which there are two copies of each chromosome) homozygous (variants with two completely identical genome copies).

This means every gene that is there has to be functional, because you no longer have a ‘backup’. Then it's time to pop the champagne because that would not only make breeding easier and more precise, but also bring the holy grail of potatoes even closer: homozygous potato seed.

To be able to do that, the potato has to be genetically unravelled. And because there is no such thing as one potato only, the Pangenome study takes a close look at six varieties that differ greatly from one another.

Where there are genetic similarities, they can determine that they form the basis of what a potato actually is.

​Potato seed is on the way!

"If we go back from four to two copies of the chromosomes, we can more easily pick out and label the favourable characteristics and use them for further breeding."

"We currently market varieties with tubers, which are actually a kind of cutting."

"Seeds from hybrids are still too unpredictable in terms of outcome; we cannot control the process genetically, precisely because of its variable nature."

"Each seed is different; this is because parts of the copies are sometimes expressed in the seed and other times not."

"We want to remedy that problem by assisting with this research."

The world that would then be opened up as a result of this, would constitute a giant step forward. Working with seeds provides undeniable advantages. Transport is more sustainable and cheaper, seeds are disease-free, and can also be stored much longer.

And that results in the potato being regarded as a food crop in many more locations around the world, starting with those that are remote and hard-to-reach.

"That would be a great leap forward. We have known for a long time now that the potato can offer great advantages over other crops, such as rice and cereals."

"For example, much less water is needed per kilo of product for growing it, while its nutritional value is much higher."

"The pair believe that within ten years, they should be able to make potato seeds that will travel around the world. And then there will be seeds for different kinds of improved varieties, which will be suitable for various different environments."

"We can then have a much greater impact. We can make a serious and substantial contribution to feeding the world's population sustainably."

The research study looking at corresponding genomes within potato varieties was carried out by HZPC, Averis, Wageningen University & Research and two American universities. The idea is to determine the genetic code of six very different varieties, which cover the greatest possible diversity within potatoes. 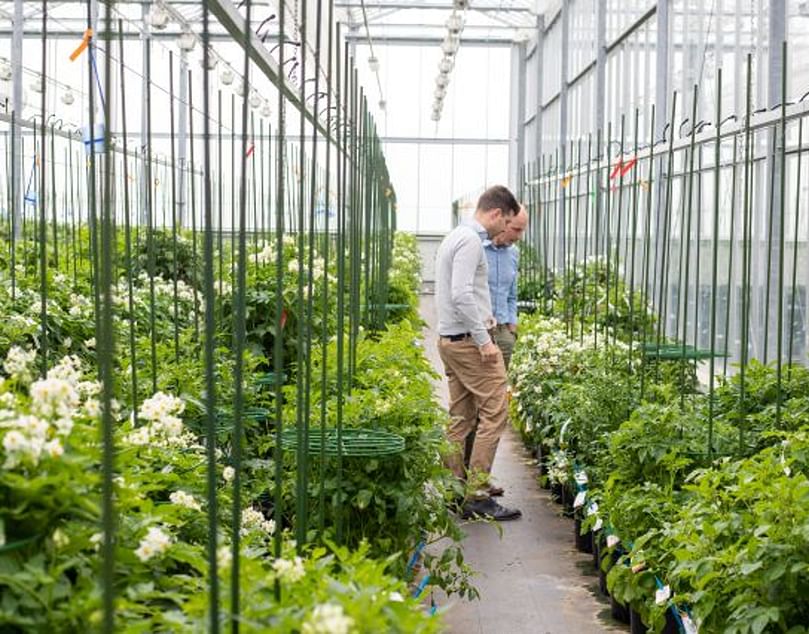 By comparing these varieties, a great deal of information can be gathered about which genes are essential for a potato. HZPC chose Spunta for this, while research partners supplied the genetic codes for Avenger, Altus, Colomba, Castle Russet and Atlantic.

The result was published in March this year as a study that involved the work of 48 researchers from 5 different countries: Phased, chromosome-scale genome assemblies of tetraploid potato reveal a complex genome, a transcriptome, and predicted proteome landscape underpinning genetic diversity.

In parallel with research into the pangenome of the potato, here at HZPC they have been working for a number of years now on an important potato innovation: hybrid potato breeding. A diploid hybrid potato is a combination of two inbred varieties that yield a uniform product. 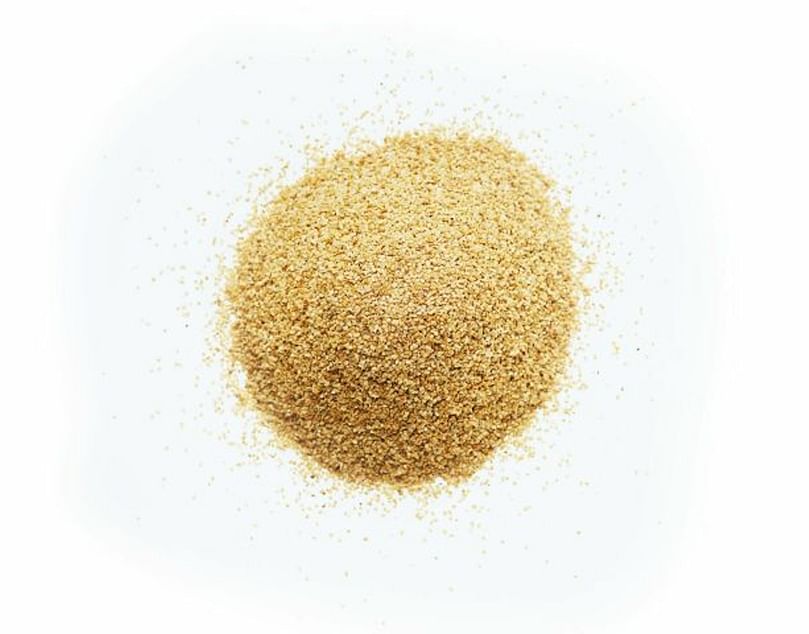 They look the same as a traditional potato. The potato varieties we will soon be holding in our hands can be grown from a tuber, but also from a seed.

And that offers enormous advantages, such as cheaper and easier transport, especially to those parts of the world that are difficult to reach.

Another advantage is that the characteristics of the variety can be changed more rapidly, so that the potato can be made more resistant to certain diseases, for example. The first hybrid varieties are expected to be available for the market in Sub-Saharan Africa and Asia from 2025.
Source
HZPC Holland BV
Like to receive news like this by email? Join and Subscribe!