Humans have been reshaping the planet’s land for millennia by clearing wildlands to grow crops and raise livestock. As a result, humans have cleared one-third of the world’s forests and two-thirds of wild grasslands since the end of the last ice age.

This has come at a huge cost to the planet’s biodiversity. In the last 50,000 years—and as humans settled in regions around the world—wild mammal biomass has declined by 85 percent.

Expanding agriculture has been the biggest driver of the destruction of the world’s wildlands. This expansion of agricultural land has now come to an end. After millennia, we have passed the peak, and in recent years global agricultural land use has declined.

Agricultural land is the total of arable land that is used to grow crops, and pasture used to raise livestock. Measuring exactly how much land we use for agriculture is difficult. If all farms were simply rows of densely-planted crops it would be straightforward to calculate how much land is being used.

Just draw a square around the field and calculate its area. But across much of the world, this is not how farming looks: it’s often low-density; mixed in with rural villages; in tiny smallholdings that are somewhere between a garden and a farm. Where farmland starts and ends is not always clear-cut.

As a result, there are a range of estimates for how much land is used for agriculture. Here I have brought together three analyses on the change in global land use—these are shown in the visualization (1). Each uses a different methodology, as explained in the chart.

The UN FAO produces the bedrock data for each of these analyses from 1961 onwards; however, the researchers apply their own methodologies on top, and extend this series further back in time (2).

As you can see, they disagree on how much land is used for agriculture, and the time at which land use peaked. But they do agree that we have passed the peak. This marks a historic moment in humanity’s relationship to the planet; a crucial step in its protection of the world’s ecosystems.

It shows that the future of food production does not need to follow the destructive path that it did in the past. If we continue on this path we will be able to restore space for the planet’s wildlands and wildlife (3). 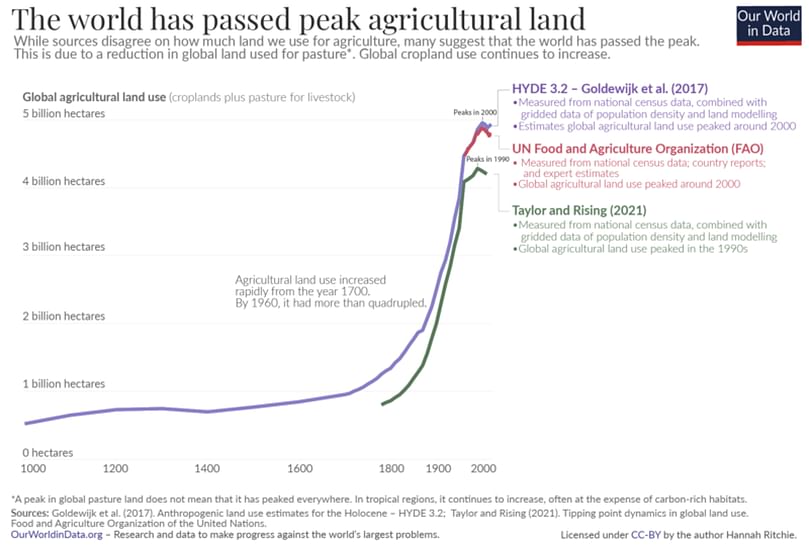 A Global Decoupling of Agricultural Land and Food Production

Despite this reduction in agricultural land, the world has continued to produce more food. This is true of both crops and livestock (5).

The decoupling in the chart that presents the UN FAO’s data. It shows that global agricultural land—the green line—has peaked while agricultural production—the brown line—has continued to increase strongly, even after this peak (6).

When we break each agricultural component out individually, or look at it in physical rather than monetary units, we find the same trend: a continued increase in output. You can explore this data for any crop or animal product in our Global Food Explorer.

This shows that feeding more people does not have to mean taking habitat away from other wildlife. This decoupling means that we can produce more while giving land back to nature at the same time.

Global Agricultural Land Has Peaked, but Cropland Has Not

Global pasture has peaked. Global cropland has not. This might come as a surprise as global meat consumption is increasing. How, then, can pasture for livestock have peaked and now be falling?

The world produces three times as much meat as it did 50 years ago. But how this meat is produced and what types of meat we eat have shifted. First, we produce a lot of pork and chicken which are not fed on pasture.

Second, a lot of our beef production has moved from open pasture grazing towards more intensive farming methods; this has spared land. This presents an important dilemma: grain-fed livestock is often more land-efficient than pasture-fed livestock, so you need less land overall; but the biodiversity on grazing lands is often better than intensive croplands.

What this means is that more and more animals are being fed from crops grown on croplands, rather than on pasture. In fact, almost half of the world’s cropland is used to produce animal feed. Unfortunately, this conversion process from crops to meat is still an inefficient one, meaning we need a lot of land to produce a small amount of food.

Biofuels, too, have added additional pressure on croplands, especially in countries such as the US and Brazil. 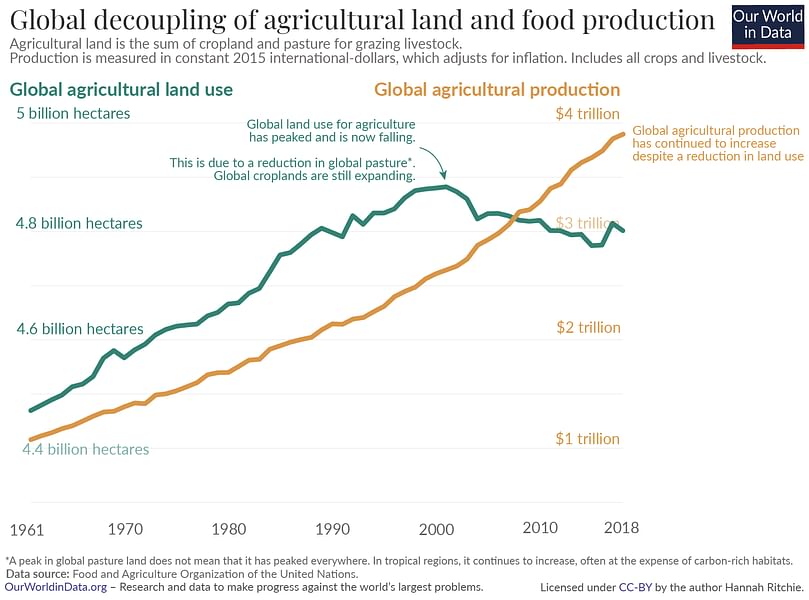 The second is the distribution of these changes in land use across the world, and their implications for biodiversity loss and carbon emissions.

The largest reductions in pasture have been across arid regions; temperate regions have also seen a reduction in recent decades; meanwhile pasture has continued to expand in many tropical countries (8). Indeed, as the expansion of grazing land for beef production is still the leading driver of global (and tropical) deforestation.

The reason that this shift of pasturelands from arid and temperate to tropical regions is important is that the tropics are much richer in biodiversity and carbon. Over half of the world’s species reside in tropical forests (9). Tropical forests are also large carbon sinks, and can store a lot of carbon per unit area (10).

The third, as mentioned earlier, is that global croplands are still expanding. We see this in the chart. Other sources suggest that this rate of increase might be even faster (11). The World Resources Institute looks at this research in more detail here.

Finally, quantifying the amount of land that is used for pasture is difficult. Here we have focused on reported agricultural land use data from the UN FAO based on census data, country reports, and expert estimates, but this comes with uncertainty (12).

Improving our measurement of agricultural land use, potentially from satellite data, would allow us to monitor changes more closely.

Continued Decline Is Not Guaranteed: The Future of Land Use Rests on the Decisions We Make Today

Several sources suggest that global agricultural land use has fallen in recent decades. However, a continued decline is not guaranteed.

As we see from the HYDE 3.2 series in the first chart, land use reached its highest levels in the early 2000s and has declined since then, but is seeing a small rebound in recent years. Land use is still expanding across Sub-Saharan Africa and South America. As populations increase, and incomes rise, the pressure on land will continue(13).

This is why, as I argue here, improvements in crop yields and agricultural productivity are so important. Reducing land pressures by reducing meat consumption and land dedicated to biofuels is also vital (14). Fail to invest in these improvements, and we risk reversing this global trend.

We may end up with a short-lived and temporary peak. Make it a priority, and we can accelerate reaching this peak everywhere.
Bron
Hannah Ritchie, Our world in Data
Wil je nieuws zoals dit per email ontvangen? Maak een account aan!