Grimme UK and Haith reveal their vision for optical sorting 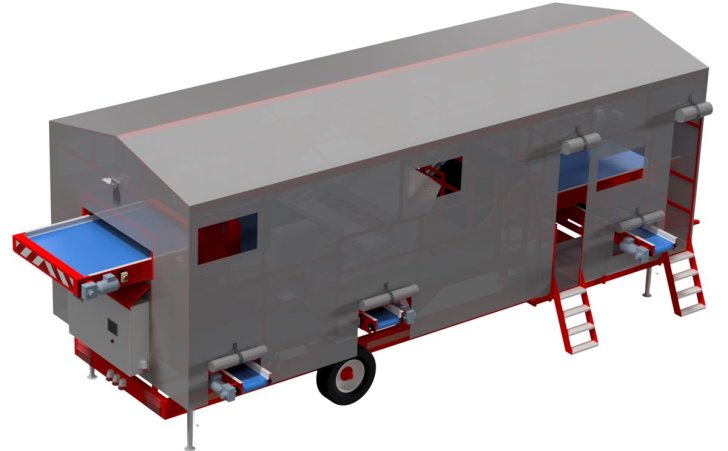 Designed to automate the removal of stone, clod and foreign debris from potatoes and help growers cope with labour shortages, demonstrations of the new PRO Sort are now being organised.

At the heart of the PRO Sort is a TOMRA 3A optical sorter which is capable of handling up to 100 tonnes per hour with high levels of accuracy.

The TOMRA 3A employs Near Infra-Red multi-spectral sensors for an unobstructed assessment of every object 'in flight', seamlessly identifying between potatoes and foreign material.

As well as debris, the 3A's colour sensors can also detect green potatoes, which like the debris, are removed at the end of the conveyor belt by intelligent finger ejectors.

As the PRO Sort is a modular unit, it can be used either in the field or on a farm and be easily integrated into a new or existing grading line.

"We have developed the PRO Sort in response to the increasing number of growers who are finding it incredibly difficult to find people to sort and pick their crop before it goes into store or is delivered to processors."

"We have a proven track record of developing innovative mobile washing and grading equipment and having integrated the TOMRA 3A into many of our grading projects, it was logical to put it at the heart of this unit."

By working in partnership on the development of the PRO Sort, Haith and Grimme have ensured that the new unit can be used in conjunction with the Grimme RH receiving hopper to transfer potatoes into store and the Grimme Cleanloader.

"Our collaboration with Haith is all about developing complete solutions that help our customers do things better."

"The PRO Sort is a perfect example of this ambition. We have developed a solution that will save growers both time and money and allow them to operate efficiently despite the widely reported labour shortage."

"The PRO Sort can be used as a standalone machine, combined with our receiving hopper and CleanLoader, or added easily to a Haith line."

"Having spoken to several customers about the PRO product line, we are confident it will be very well received and the demonstration days later in the year will be very popular."

Grimme UK is a sales and service subsidiary of the GRIMME brand, known for its potato, beet, and vegetable technology.